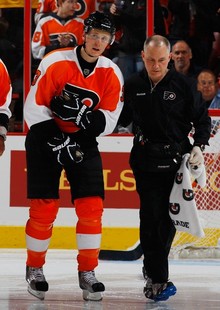 Early in the second period of tonight’s overtime loss to the Phoenix Coyotes, defenseman Oskars Bartulis was hit late after a whistle by former Flyer Scottie Upshall. Bartulis was standing next to the net when the whistle had been blown, and Upshall skated hard into the young Latvian.

The hit didn’t look nearly as bad as Bart’s tumble into the boards that followed it. He was down on the ice for about a minute and a half before skating away under his own power.

General manager Paul Homgren spoke to reporters after the game about his status.

“We won’t really know until tomorrow. It’s a shoulder injury… we’ll get an MRI tomorrow, see what were dealing with.”

Most of the players after the game commented that they didn’t see the hit and would have to watch the replay before commenting on it, but Holmgren shared his view. Was it a fair hit?

“No. You know, Oskar’s just standing there, minding his own business. It was a late hit… Yeah, I had a little bit of a problem with it. Not really like Scottie to do that, but things happen.”

Coach Peter Laviolette seemed to agree, saying, “What I’m disappointed about is that Bart came back in the line-up and he was terrific. He played really strong for the time he was out there and unfortunately, we thought that should’ve been a major.”

I’d agree that Bartulis played well, considering he sat the majority of the season in the press box. He played more minutes than Chris Pronger in the first period, having been paired with Andrej Meszaros in the absence of linemate Sean O’Donnell.

Bart seemed to do just fine in the defensive zone, but struggled a bit offensively. During one shift, he broke up a play for Phoenix and got the offense started the other way. Once in the zone, though, he tried to jump in the play to keep the puck alive and got spun around, allowing an odd man rush to develop the other way.

With Bart out of the line-up for the foreseeable future, there’s a possibility that he gets put on injured reserve and the team calls up one of either Matt Walker, Danny Syvret, or Erik Gustafsson. Surprisingly, though, Holmgren gave some positive (if rather ambitious) news.

“Actually, Sean’s a possibility for next game,” Holmgren said. “He got good news yesterday on his MRI and it’s not a ligament problem that we’re dealing with.  He actually skated for about 40 minutes today and felt pretty good… We’ll talk about it tomorrow, I don’t know yet.”

A speedy recovery for O’Donnell, who left Sunday’s game against the New York Rangers after the first period, feels like it’s too good to be true.

Jody Shelley was also injured tonight after wiping the ice with Coyotes enforcer Nolan Yonkman, and didn’t return to the game. No one seemed to think to ask about his status after the game, nor did Holmgren offer any updates.