Plaxico Burress To Leave Prison Today, Rosenhaus: “He will be top free agent” 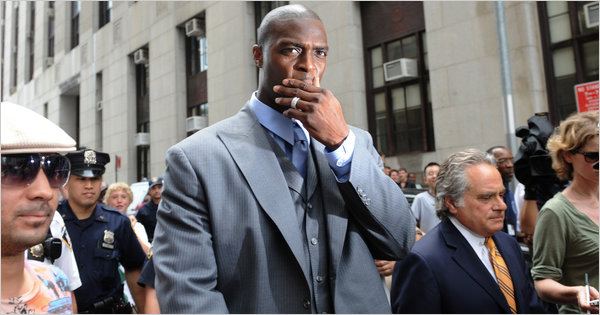 Are the Eagles really serious about signing former Giants wide receiver Plaxico Burress? Who knows but Burress will be released from
the Oneida Correctional Facility in Rome, N.Y., later today.

According to the New York Times, Burress will jump on a plane and head south to Fort Laurderdale, Florida and reunite with his family, his agent Drew Rosenhaus, and his business manager, Tony Johnson. Of the course the agent is predicting that there’ll be quite a few teams interested in signing the 6’5″ wide receiver.

“Many teams want him,” agent Drew Rosenhaus told the Associated Press via e-mail. “He will be a top free agent. He is healthy and ready to go. He will be signed shortly after the lockout ends.”

I’ve learned from an NFL source that Rosenhaus and Eagles General Manager Howie Roseman have developed a close relationship over the last couple of years, so it could help the Eagles in the near future, if they decide to take a shot at signing Burress when they get the chance.

Rosenhaus already has a client who is a Philadelphia Eagles wide receiver and of course I’m talking about Pro Bowler DeSean Jackson, who is anxious to get an extension of his rookie contract. Jackson is expecting a major raise, so Rosenhaus will have to perform a delicate balance in pushing for contracts for two players at the same position with the same team, if the Eagles are interested in Burress.

There’s also been a report that Eagles quarterback Michael Vick did get the chance to talk to Burress. The fact that Vick has been through the same situation which Burress is dealing with, may help give the Eagles an advantage if the Birds are interested in the big fella.

Johnson says Burress will be a changed man in that he will value his NFL career more than he did in the past when he had a questionable attitude and suffered numerous fines and suspensions.

“He knows that he has been blessed to be able to come out and go into a lucrative career,” Johnson said.

“But he wants to make sure that he can help as many people avoid what he’s been through himself.”

Ellis Hobbs Sounds Like He Plans On Continuing NFL Career

Plaxico Burress Is Released From Jail With A Phillies Cap On