Manuel Is Right About Lee And Blanton

Charlie Manuel made the call to go with righthander Joe Blanton in game number four rather than asking Cliff Lee to do something he’s never done in his career, pitch on three days rest.

Yes everyone knows that if they had a choice they would rather have Lee on the mound rather than Blanton, but I think Charlie made the right decision.

You shouldn’t ask Lee to do something he’s never done before in the World Series and have him push himself and his body into an injuiry.

I know everything is on the line, but they’ve got to be smart.

Throughout his entire career, his body has been trained to get four days of rest in between starts.  This is not the time to make that drastic a change to his pattern. 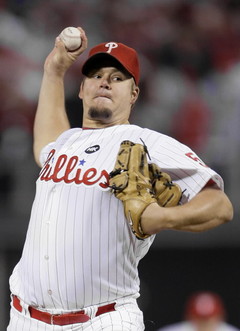 He could go out there in the cold weather with a day less of rest and not be able to get his arm as loose as it should be because it’s still recovering from the last start.

It’s very important that a pitcher take the time to get his arm loose when the weather is cold because he would be more vulnerable to an arm injury if he’s throwing the ball as hard as he can but he’s arm isn’t loose.

Hopefully Cole Hamels pitches well enough tonight for them to get a victory, then Blanton gives them a good outing and Lee closes the door on the Yankees on Monday.