Report: Haynesworth would take less money to play for Eagles 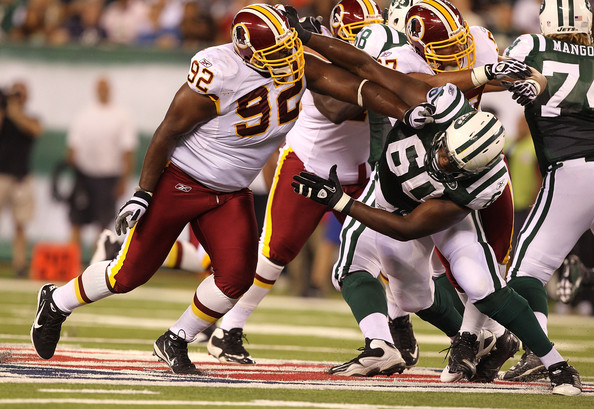 There has been a lot of speculation about the Eagles potential interest in soon-to-not-be-a-Redskin-anymore DT Albert Haynesworth. That talk just increased five fold after the Eagles brought in his former defensive line coach in Tennessee.

Now, Jason La Canfora of NFL Network is reporting that Haynesworth would take less money (like he has a choice) to be reunited with Jim Washburn in Philadelphia.

This really does assume though that Haynesworth hits free agency. There is no guarantee of that, as the Redskins will definitely want to get something for him in return. Good luck with that. The Titans are more well versed in his knuckleheadery (just made that up if you couldn’t tell) than anyone in the NFL, and even they wouldn’t part with a fourth-round pick this past year.

So, I’m not sure what the Redskins would get in return, but if the Eagles parted ways with a fifth-round pick for a stiff like Ernie Sims, they should at least offer that for Haynesworth if it came down to it.

We all know the Eagles need defensive line help and we all know that Haynesworth is an absolute monster when motivated (and under Washburn). So if the Eagles can get him signed to an incentive-laden contract (assuming they don’t trade for what’s left of that ridiculous free agent deal with Washington), he could be a serious difference maker.

Also, think of how much better everyone else would be with him destroying the middle.

Aaron Rodgers Will Lead The Packers Over The Bears

Samuel And Peters Back Out Of The Pro Bowl