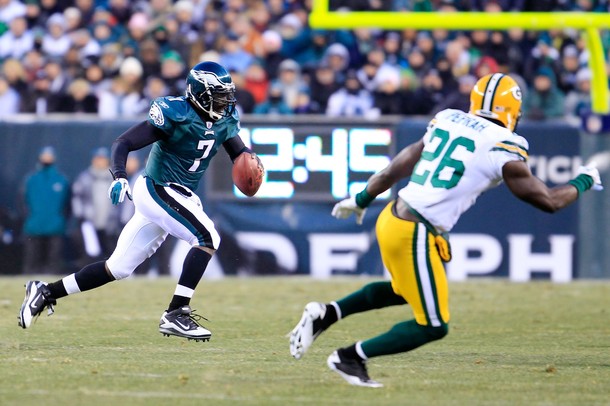 610-WIP radio talk show host Howard Eskin was guest-hosting on the Dan Patrick Show today and he confirmed something which I had let you know when Michael Vick decided not to do the Oprah Winfrey Show.

If company which had helped you get back into your chosen profession after you had to go away to a federal prison for two years, said they didn’t think it was a good idea for you to do a television show. Would you do it? Would what they said and felt be important to you? If you had any sense it would. Add to that the fact that they just agreed to pay you at least $16 million dollars next year and you can understand why Vick isn’t going on Oprah’s show.

Bottom line was that Vick was going to do the show if the Eagles hadn’t said anything else about it after he agreed to do it. Realize that Oprah Winfrey is quite influential with everyone. She had requested and he had agreed. For him to go back on his word with Winfrey, isn’t a little thing.

I wouldn’t be surprised if Vick’s people told Winfrey’s people that the Eagles didn’t want him to do it. I don’t blame the Eagles for not wanting him to do it. This was a like a preseason game for a Superstar player for the Eagles. The only thing that could happen was something bad. They don’t need a guy who they just agreed to pay at least $16 million dollars next season, to be reigniting a hate campaign against himself. I wrote in other articles about the different things that could go wrong.

Howard sounded like a man who couldn’t get out of his own way. You can read between the lines that the Eagles subtly influenced Vick. They didn’t want Vick to do the show, but they also didn’t want to come across like they were dictating what he would and would not do. They knew they could possibly get the wrong reaction from their star quarterback. They wound up getting exactly what they wanted.

He’s not doing the event and he made a public statement, which sounded like he and his PR people decided on their own not to do it. The only mistake the Eagles made was sharing with Eskin how they got Vick to decide not to do the show.

You can read between the lines that the Eagles talked to him about. Here’s some of what ProFootballtalk.com reported that Eskin said on the show.

“I can tell you for absolute and absolute certainty that Michael Vick didn’t go on and it was clearly his choice to not go on”, Eskin said on the show. “Now, did the Eagles like this? No, they did not. Did the Eagles tell him not to do it? No, they didn’t tell him not to do it.”
……..“[H]e had reservations,” Eskin said. “And he told some people at the Eagles — and it was not Andy Reid — that he had reservations. And I can understand that. You’re gonna go on there and you’re not gonna be sure of yourself. And people from the Eagles said, ‘Listen, if you have reservations, you can not go on with Oprah Winfrey. It’s still your call, your choice, you make a decision. But if you’re not sure of it, just tell them you can’t do it, and that’s basically what happened.”

Mediation Agreement May Be PR Ploy For NFL Owners & Players