Michael Vick Unable To Appear On ESPN Show, But Why? 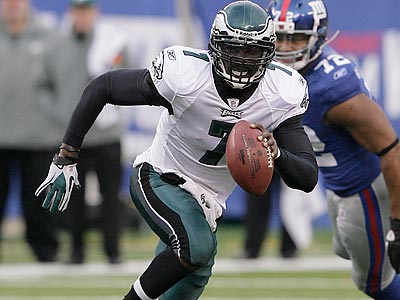 According to Jeff McLane of Philly.com, Eagles quarterback Michael Vick was scheduled to make an appearance on ESPN”s First Take this morning, but was he unable to follow through on the appearance because the Maxwell Football Club had booked him to do interviews with the media at Harrah’s Casino in Atlantic City, without first checking with him or the Philadelphia Eagles.

When informed of the fact that Vick wasn’t going to be able to make an appearance on the show, Jay Crawford, the host of the ESPN show said, “we’ve been Oprahed.” Of course he was referring to Vick backing out of an appearance on Oprah’s show.

Although I don’t think this mix-up was Vick’s fault, I’m interested in seeing how this situation is going to be covered by the media. Will it be turned into a controversy.

Vick will receive an award from the Maxwell Football Club later tonight.

NFL Owners And Players Agree To Extend Mediations For A Week

Who’s going to give a crap about the draft if there is no CBA?

The media in this country is a joke.

Thats how you know its slow time profootballtalk is making a huge deal of who and what and when, i really dont care if he shows up lets just make sure everyone shows up for the start of the season………..CBA!

I couldn’t have said it better.

Everyone is trying to catch Michael Vick doing something wrong. If it was someone else, there would be little mention of it in the news.

CBA……… my definition!!!!!!…….. Collective Banking Agreement……. Theres no bargin with these owners…… There sure as hell no agreement with them either….. Just Collect thats it…… We as fans of the NFL have been bamboozled!!!!! LOL!!! The Media is nothing more than a company full of Folk tales who try anything just to get a story…….. “Mike Vick tied his shoes this morning and ate a bagel with jelly”! “Is he ghetto for not putting philadelphia cream cheese……. “Or is he a trader to the Philly fans”????? Give me a break media!!!

I am going to start a “Where’s Michael Vick at??”, blog which will be a 24 hr/365 days blog about the whereabouts’ and why here, not there, and where he is going next Questions can be asked,answered,and debated about it..
Thanks G for the $250,000.00 no-interest loan for me to get this new Web-Site off the ground and started as soon as I get back from the Greek ISland Vacation….

Mcnabb never had this much story behind him and he was one of the most humble guys for this franchise for 11yrs…. Vick has probably in 2yrs. overshadowed Mcnabb’s news in 11yrs. in philly…… Vick this Vick that…. I know Mcnabb hasn’t done things like break the law but man… SMH………

Jaws just released a statement saying it was Maxwells fault. Still who cares?

If i was Vick i wouldn’t go on any shows. He is going to be setup with a rooom full of animal lovers or the people who adopted his old dogs. The guy paid is due to society but that’s not enough for the PETA people. Mike, if you are reading this, workout, study and think about football. Do no TV unless it is inPhilly. If not they will find a way to crucify you on live TV.

I see a ton of sports players who have do wrong and very few if any are getting the “where’s Carmon ” treatment like Vick. Quick some please tell me where Stallworth is, where is Ray Lewis, Where is big Ben, where is …….. ah never mind forget it.

Dog lovers of the have some heart, hell you crying more for the dogs then they did for the Lord when they stuck him to the cross.

Before anyone has time to be offended by that out of place statement, let me save you the trouble and say, Soooorry.