Steelhawks Get Their First Win In Dramatic, Last Second Fashion 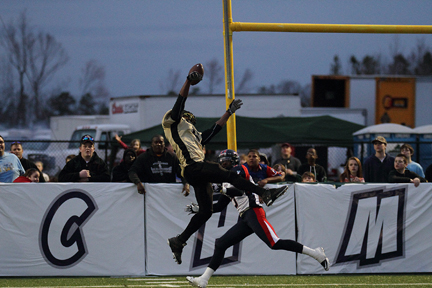 After a heartbreaking loss in their opener last weekend to, the Lehigh Valley Steelhawks took the five hour drive south on Saturday morning, looking to take home their first victory in team history. They did just that edging the defending Atlantic Division Champion Richmond Revolution 41-38 on a 17 yard touchdown pass from AJ Roque to Irani DeAraujo Jr. with 1.2 seconds remaining in the contest.

The Steelhawks began the game from behind as new Revolution Quarterback Dennis Brown used his mobility in the pocket to cross the goal line for an early score. On the extra point attempt, Defensive Tackle Chris Medina penetrated the line for his first of THREE blocked kicks. In addition to all the blocked kicks, Medina would finish the night on defense with a sack, forced fumble, fumble recovery, and five tackles.

From there, the Steelhawks Offense began to click. On their next possession Quarterback AJ Roque sold a perfect pump fake and found DeAraujo Jr. deep for a 22 yard scoring strike. A Paul Stoltz extra point gave the Steelhawks the lead at 7-6. From there, Head Coach Rich Britt put the ball in the hands of his Running Back’s Isaiah Grier and Ryan Leafey. Grier continually pounded his way through the Revolution’s defensive line, finishing the night with 63 Rushing yards, 15 receiving yards, and one rushing touchdown while Leafey was a huge threat in the receiving game out of the backfield, and provided Roque an outlet on many of his drop backs.

Still, the Steelhawks had troubles containing Brown’s mobility in the backfield and found themselves down 25-24 at half after he

found Rev’s Wide Receiver Josh Crawford deep in the endzone for a late half scoring strike.

Once the second half began, the Steelhawks regained the lead once more in this back and forth battle with a 24 yard field goal by Stoltz, who contributed a total of 12 points on the evening. The Revolution came right back again with a deep scoring pass from Brown after a Steelhawks DB was tripped up by the side boards to go up 31-27. But yet again Roque led the team back from behind on a long drive that culminated in an 11 yard scoring strike to Quintin Lopez in the back on the endzone to go up 34-31.

With less then two minutes remaining the Steelhawks thought they had sealed their first victory when on 4th down a pass from Brown fell incomplete. However the refs whistled the Steelhawks secondary for a hold giving Richmond the ball back. Brown then found Crawford for his fourth TD pass of the evening, and leaving only 59 seconds on the clock and giving the Rev’s a 38-34 point lead.

Needing to drive the team 45 yards, Roque put the team on his back hitting receivers quick and often as they marched down the field. A controversial non-catch call from Roque to Leafey, which would have put the team on the Revolution three yard line left the team with 4.8 seconds and one play remaining on the Revolution 17 yard line. Dropping back for the final play, Roque lofted a perfect pass to the back of the endzone that was hauled in beautifully by DeAraujo for his second score and the game winning touchdown with 1.2 seconds remaining. The victory puts the team at 1-1 heading into their bye week, and tied for first place in the Atlantic Division after a Reading Express loss to the Chicago Slaughter Saturday evening.

“As a Coach, I can’t say enough about this team’s heart,” stated Britt. “They never gave up despite adversity, and we continued to fight throughout the 4th quarter. Our message all of camp and all season is ONE TEAM, ONE GOAL. The overall goal we still have to achieve, but have shown that we are a team and not a group of individuals.”

The team will now receive a week of rest before gearing up to take on this same Richmond Revolution team in two weeks in their Home Opener. The game is scheduled for 7 p.m. at the Stabler Arena on the Goodman Campus of Lehigh University on Saturday, March 19th. Limited tickets are still available for the game by ordering online at www.LVSteelhawks.com or by calling the Stabler Arena Box Office. Remaining tickets will be sold at the door. Fans are urged to wear ALL BLACK in the first ever STEELHAWKS BLACK

Season ticket packages, starting as low as $8 per game, are still available but great seats are limited, so reserve your seats close to the action and call the team’s front office at 610-282-3100. Don’t miss out on the fun and exciting atmosphere that is Steelhawks Professional Indoor Football!

Individual tickets are also on sale via the Steelhawks Website (www.lvsteelhawks.com), thru ticketmaster, or by visiting the Stabler Arena Box Office at 124 Goodman in Bethlehem. For further information on the Lehigh Valley Steelhawks please contact Executive Vice President Mike Clark at 610-282-3100.

Plenty Of Questions Surrounding Utley’s Health & Future, But No Answers As Of Yet

2011 NFL Offseason: A Closer Look At The Eagles Tight Ends