Dominic Brown Is Going Back To Doing It His Way 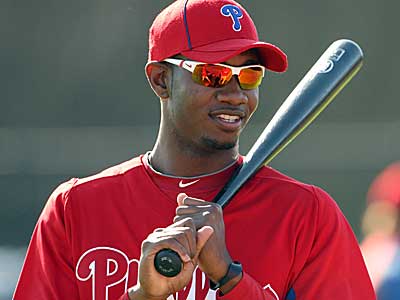 Dominic Brown tried it their way, meaning the way hitting coach Greg Gross wanted him to do. He lowered his hands and took five or six games to get a single hit this spring, so now he’s going back to what got him to the majors. The rightfielder will have his hands back up high when he returns from the hand injury.

“I just said forget it,” Brown said. “I’m going to go back to what got me here. I got my hands back up, was feeling comfortable, got the hit, but obviously I was in a lot of pain. Things happen. That’s part of the game.”

With an opportunity to win the starting right field job, Brown started out the spring going 0-for-15 with nine strikeouts, so the experiment was a disaster. Gross had figured Brown would benefit from lowering his hands because it supposedly would help him maintain his balance.

He was right, the youngster kept his balance, but lost his confidence because he was making a big change in his stance at a key point in his career and under a tremendous amount of pressure. Brown was thinking about his hands and unable to focus at the plate. He’s wisely going back to the stance which helped him hit himself into a Major League opportunity.

“That’s the key for me,” he said. “We see the other thing did not work. The hands down, that’s going to take time. And I don’t really have time to spare, especially coming from winter ball and not having time to prepare myself with the lower hands.”

The Phillies need Brown’s bat more now with Chase Utley out of action. They need him to come back and start pounding the

baseball. He’s got to learn to play with confidence and relax.

Brown needs to know that getting the job done is ultimately all that matters. If you get it done, everything is great, but if you don’t, trouble lies ahead. I would say to the young man, do what you need to do to be productive.

Owners And Players Finish Thursday With Some Finger-Pointing