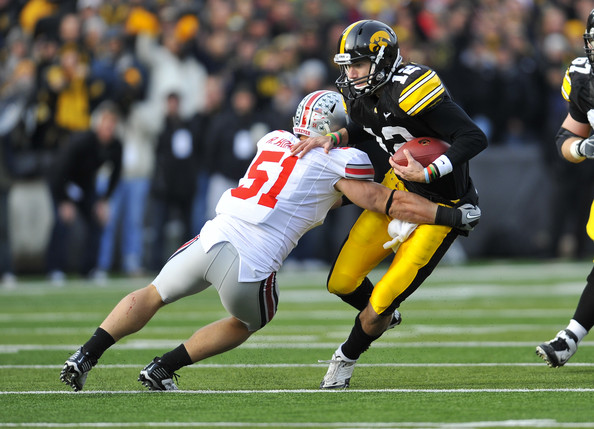 The Eagles are working hard on their draft board by doing the late rounds first, then they complete the early rounds afterward. General Manager Howie Roseman told Dave Spadaro of PhiladelphiaEagles.com, that the Eagles already have completed their fourth through seventh round preparations and they’ve identified the rookie free agents, whom they will be interested in.

Now in the next few weeks they’ll be working on the top three rounds. Of course those top rounds are so important that require more time and attention. The Bird have been evaluating players, giving them draft scores, now they’ll set them up their draft board and look it over again and again.

We also learned that the Eagles are going about their business preparing for the upcoming NFL draft. According to NationalfootballPost.com, they took a close look at a couple of Ohio State linebackers this past Monday. Aaron Wilson tells us the Birds worked out Brian Rolle and Ross Homan.

Rolle is on the small side, standing only 5’10” and weighing only 229 pounds. He made the All-Big 10 team and has good speed, but I’m tired of the Birds grabbing all of these undersized defensive players. He’s not big enough to be a successful NFL linebacker.

Not surprisingly, Wilson says he’s been working out as a defensive back for the NFL teams, but that’s a major move to go from

linebacker to defensive backs. I don’t like the idea of changing players’ positions all the time. This has proven to be a bad strategy too many times for the Birds.

Homan is bigger than Rolle. He stands 6’1″ and weighs 240 pounds. He also made the All-Big 10 team and could be a guy the Birds might grab in the middle to late rounds. Homan is a solid football player, but I don’t see him upgrading the Eagles linebacker position. They would have to be looking at him as a backup.

Here Are My Final Four Predictions

Rolle is a freak on the field and undersized he is not! Look at Ernie Simms he’s only 5’11 225 and he has been dominant.At 5’10 230 I think rollevwill be a demon at outside backer and special teams.Those guys up top are to slow for what the eagles do

I hear your enthusiasm bucks239, but he looks too small to me…
For the record, I don’t beleive there is anyone who watched the Eagles last season would catergorized Ernie SIms play as dominant, probably most reactions would be far from it which is why he was not offered a contract and will most likely not return to the Eagles next year

**Under The Radar** Casey Matthews (Brother of Clay Matthews) Ht:6’2 Wt:237 (they’ll put weight on him) was a tackling machine in college led entire team with 79, not the fastest ILB but makes plays he showed he has the instincts. The genes are strong his father was great his brother is great so the apple doesn’t fall far from the tree, if the birds pick him they won’t regret it. Maybe in the 2nd or 3rd round

Elijah Joseph is hurt right now (if it can be a lingering injury, depending on the severity they should stay away from him

Brian Rolle is short, I wouldnt say he is undersized, dont let the height fool you…The kid is very quick and strong. I wouldnt be mad at all if we picked him up.

If the Eagles could get him in 4-5 round, I’d applaud the selection.

The Eagles should address the offensive line, in my opinion the left side of the O line is pretty solid…The RG, RT positions is what concerns me.

@RealTalk, the eagles feel that there good on the Oline. Sims probably won’t return either so the biggest needs are linebacker and cornerback. They feel they have the players in place on the oline already and now they have a new oline coach in howard mudd that will bring a new attitude to the oline.

Me personally don’t care for justice but they’re high on him I guess, that entire right side concerns me, but before rushing to judgement let’s see what Mudd can do

ebg, with all due respect, how do you know how the eagles feel?

@schiller, let me put it this way, the eagles have already spent high draft picks on the offensive line. They acquired pro bowler Jason Peters, before that they spent a 2nd round pick on winston justice, herremans is a pro bowl type of player (was snubbed) McGlynn stepped in and did a good job at center and can play multiple positions on the line. Dunlap played the best I’ve seen him play in his young career last yr when stepping in for both peters and justice

What effected the eagles the most was the injuries. Jamaal coming back healthy will sure up a lot of holes and them bringing in Mudd makes me believe that they already have the players in place they just need to be coached up. So an offensive lineman isn’t a pressing need for the eagles
Lb and cb are. They could very well pick a olinemen sometime in the draft but at this point today Cb and Lb are bigger needs

I’m never concerned if whether the eagles will sure up the oline or if they’ll draft one. Andy does a great job of finding talent there whether its in free agency, the draft or a trade the oline is never a huge concern to me. Thats one position that should be our least concern

they need a stud on the o line , if pouncey is there just take him . if they can get an additional pick for kolb then they can take cb smith . this o line just needs some young fresh meat. sorry gents but i think its time for a boring 1st round , no glamor just a stud to protect vick.

If Ernie Sims is dominant, then what are Ray Lewis, James Harrison, Clay Matthews etc? Bucks are you Ernie Sims? its ok we won’t tell….

typical Eagles putting no value on the LB position and looking at special teams/backups type LB’ers…. no wonder the defense sucks! This year’s LB class is awful after round 2. I think Quinton Sturdivant of North Carolina is a stud who can play ILB or OLB… he is a top 50 pick and would look great in Eagles green if they can acquire picks for Kolb.

Remember our problem last year going into the season ? Wasn’t it the D-Line ? Did we ever address that ? I’m cool with the LB’s, we have some good young players who should only get better with PT…..I think D-Line is still a major issue

Remember that 3 of the DE were new to the team with 2 of them being rookies(Tapp,Graham &Teo) so looking back, it was unrelastic to expect great hings from them as a group (especially being coached by R Segrest)
Tapp improved as the year went on and Graham and Teo just got their feet wet during their rookie seasons and should be a lot better with another experience and more improtantnly player under a real DL Coach in Washburn.. and even Ricky Sapp who has put on 15 lbs of muscle and is now up to about 260 lbs or so and should be able to compete
Eagles could probably use another DT and will probably look to trade Patterson while he still has trade Value

good..glad to see that someone has finally realized that the whoever was drafting the LB’s needed to look in the mirror. aside from Chaney & Fokou sometimes, our LB’s have been trash since the old Trot left.. our LB’s need swagger & attitude..not the practice players we’ve had recently where they wanna hit his own teammates but not the opposition. then again, the only person on the D with swagger was the only one who didn’t like to tackle… crazy.