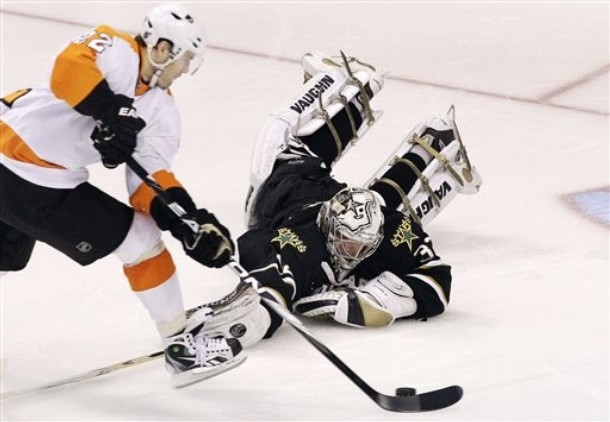 The Flyers have officially become the first team to clinch a playoff spot in the Eastern Conference. While not unexpected based on their position in the standings (they’ve been in first place since January 8), it’s relieving to not have to wait until a midnight hour shootout to know you’ve got a postseason to look forward to, rather than tee time.

After juggling the forward lines for several games, coach Peter Laviolette used a line-up in last night’s shootout victory over the Dallas Stars that is likely to remain intact for the playoffs. That includes the LBH line, a Nodl-Giroux-Carter line, a JVR-Richards-Versteeg line, and a Carcillo-Betts-Powe fourth line. That leaves Nikolai Zherdev and Jody Shelley as the healthy scratches.

On defense, Chris Pronger is expected to return in time for the playoffs and the defensive pairings will revert back to what we’ve seen over the majority of the season. Pronger’s absence from the line-up has the convenient bonus of resting him before the playoffs begin. In the event of another injury, I imagine Nick Boynton will get the call over rookie Erik Gustafsson, despite his decent play in the last two games.

Goaltender Sergei Bobrovsky is expected to get the remainder of the starts as the regular season closes out.

If this team continues to tear it up over the last 11 games, the Flyers have a strong shot of returning to the Stanley Cup Finals. If they revert to bad habits and lose confidence, the climb will become that much steeper.

A return to the Finals doesn’t guarantee success either, and the orange and black may find themselves overpowered if they face the Vancouver Canucks, the favored contender from the Western Conference. Between the Sedin twins, Mikael Samuelsson, Ryan Kesler and Roberto Luongo, the Cancucks have elite talent, elite goaltending, and substantial player depth that is arguably steeper than Philadelphia’s.

The Flyers return from their three game road trip (where they obtained 5 out of 6 possible points) on Tuesday to take on a dangerous Washington Capitals team. I wasn’t as worried about facing them midway through the season, as they appeared to have confidence issues in the locker room that were keeping them from winning close games (sounds familiar). Lately, though, they’ve been nipping on the Flyers’ heels for first place.

Michael Vick Does Prison Visit With His Mentor, Tony Dungy