Would The Sixers Have A Chance Against The Miami Heat? 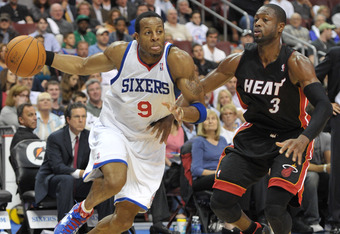 In our third and final installment in a series of potential playoff opponents for the 76’ers: The Miami Heat.

Of course the Heat have the nucleus of Chris Bosh LeBron James and Dwayne Wade, they also have acquired the services of Mike Miller, Eric Dampier and newly acquired Mike Bibby. Starting point guard Mario Chalmers is out for at least a week with a knee injury,

so Bibby will be inserted into the starting spot. After the aforementioned players, there isn’t much left from this team – but on most night’s the core of Bosh, James and Wade are enough to get the job done.

The strength of the Heat is the versatility of Bosh, James and Wade who can all play and guard at least 2 positions, this is a problem that the Sixers could encounter if the Heat went to a big lineup with Wade at the point and James as a “two”. Bosh could play a little “three” but is more effective at the “four” and “five”. Wade has the ability to post up the smaller Jrue Holiday and Jodie Meeks and is enough of a defensive presence to cause problems.

As we all know James has the ability to disrupt positions one through four at both ends, the front court of the Sixers would be severely tested in this series as Doug Collins would have to defer to Thaddeus Young in most situations to deal with James.

Andre Iguodala would draw the assignment of guarding Wade. Spencer Hawes’ ability to score away from the basket would be a plus.

Elton Brand, Marresse Speights and quite possibly Craig Brackens would platoon guarding Chris Bosh. In this all-hands-on-deck series, the Sixers would be wise to use anyone with a fresh set of wheels.

The Sixers bench would have their chance to make their mark in this series. I watched the return of Andres Nocioni on Saturday night as he, Lou Williams and Young combined for 50+ points in a loss to the Blazers. Nocioni has taken a back seat without complaint while Evan Turner has continued to develop and gain in-game experience – a classy move on his part and you can tell that he has continued to work hard in practice.

I was hoping and praying that he wasn’t in Coliins dog house, ditto Jason Kapono. The nucleus of the Sixers bench will see their share of minutes as they commingle with the starters. Collins can go a player or two deeper than usual but that’s his limit. The Sixers need to be at their maximum production as they’re facing the NBA’s worst bench unit. They should be able to get out and run when necessary – I would expect a big series from Speights, Williams and Young.

Evan Turner is a key player here, he hasn’t had the season that we’ve expected but I can’t knock him for his effort,.He’s never been too high or too low, he knows that he’s a work in progress as is his team. The biggest thing is that Collins believes in this team and sometimes that’s all that matters. This season was about getting past last season and making strides and as I remember last season, I can say that they have accomplished that.

Heat in six or seven.

Ron, to answer the question you raised, would the sixers have a chance against the miami heat. The answer is…. no. The heat will make the finals this yr and I will tell you why. Wade, lebron and bosh. Forget the bench in this series. And anyway starters log heavy minutes in the playoffs regardless unless they have a blow out game here and there. But wade bosh and bron would be too much for this young tough sixer team.

Yes they would,
They match up better with the Heat than the other power teams in the East
(Celtics & Bull)
The key to stopping the Heat to let LBJ do his thing, but keep D Wade under control,by denying him the bal,make him work hard defensivley and be physical with him to get him frustrated..
I think the Sixers can go 6-7 Games toe to toe with the Heat and have a shot at beating them which I don’t think is the case if they were to play the Celtics or Bulls

No chance at all, whose gonna stop bosh? Brand? Hawes? It won’t matter if you stop wade, they have 2 other superstars you gotta deal with. Lebron will drop 40-50 on your head any given night in the playoffs then bosh is more than capable of dropping 24-30. Wade cannot be stopped even if you may contain him a few trips, he ll still get his shots off

The heat are gaining steam right now, they ll be scary to play come playoff time which is jus a few weeks away.

Also there about to get udonis Haslem back from injury and he plays a huge part on there team both defensively and offensively. He also provides great rebounding at the pf position and he can guard centers too. The sixers wouldn’t have a chance

To EBG,
Your right about Haslem, hell I forgot about him, when he get’s back they will be a better defensive,rebounding and and overall tougher team..
Sixers would have very little chance . I think Guard Chalmers was injured the other night, so Bibby would replace him ,who is not the player he was 3-4 years ago and is a real defensive liability I would attack Bibby, Miller when they are on ther Court for the Heat as much as possible

EBG, they are gaining serious steam, I’m watching the Knicks trying to hold off the Celtics. Haslem only played on 13 games this season?

Ron great article, yeah he played 13 and missed the last 55 games, he’s well rested and surely ready for the stretch run. Don’t forget he was on the championship squad in 06′ and made huge shots for them and provided stellar defense and rebounding so he knows what it takes to win

Paulman your right attack miller and bibby they are the weak ones on defense. But there role on the heat is to make open jumpers or 3s, just spot up and shoot. Were gonna see if these guys can make big shots. Paulman your right too about bibby he isn’t the same he’s changed alot , remember when he was on the kings and he gave the lakers fits whenever they played them? Man those days are long gone

The sixers win again. Doing what I said they would inching ever closer to that 5 spot. Let’s hope they can have some inspired play at the center position bc that’s our problem position. Whether its defending centers or scoring from that position we struggle. So let’s hope hawes and some of our other vets can put something together down the stretch some type of consistency