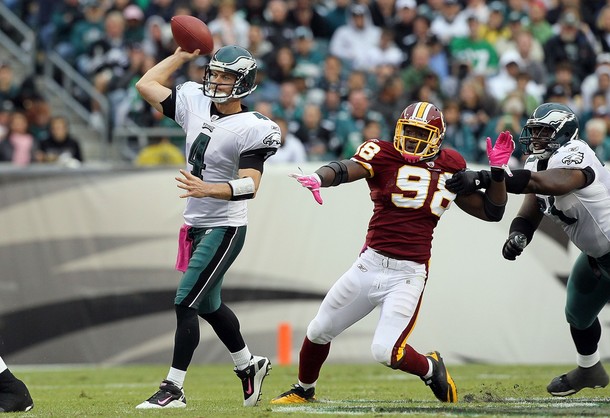 If you were running an NFL team, which was in need of a starting quarterback, would you put all your cards on the table with the Eagles during a time in which you couldn’t trade for Kevin Kolb because of the NFL lockout? Of course you would call them and tell them you were interested but you wouldn’t make a definite offer.

I do think the Birds will get a first round offer for Kolb when a injunction is put in place and trades are possible, but that’s the case right now.

I can tell you that I wouldn’t make the Eagles an offer at that time. Maybe you would, but I wouldn’t. I would let them know I was interested but I would want to wait until we could consummate the deal before I would put a first round draft pick on the table.

“You can figure if there’s a quarterback that a number of teams are interested in, you’re going to end up with some meaningful compensation,” Eagles president Joe Banner told Philly.com’s Jeff McLane on Monday at the NFL owners’ meetings in New Orleans. “You can kind of figure out what that means and speculate from there. That’s the situation we’re in.”

Banner went on to make it seem like about a quarter of the league has given the Eagles a call to let them know that they have interest.

“But the pool of teams interested in him is much bigger this year, by the dynamic of how many teams need a quarterback and how few other options there are to get one,” Banner added. “There were a group of teams that last year tried to get by with OK quarterback situations and it didn’t work out very well at all – all the West Coast teams, the Carolinas, the Miamis.”

When have you ever heard the Eagles front office talk so openly about the failings of other franchises? The more I hear them, the more I start looking for a used car salesman to show up.

Personally I don’t think everything smells right about this report. When somebody starts talking about a definite offer of a number one draft pick at this time, I don’t buy it. It would be a total act of incompetence on the part of an NFL General Manager to offer a first round pick to the Eagles for Kevin Kolb before a deal could even be done.

Offering a number one pick now would almost guarantee that the entire league would know about the offer in the not too distance future. General Managers and Head Coaches know how information slips out so consistently in the NFL. If something happens behind close doors and at least three people know about it, it eventually becomes public information.

I do believe the Eagles have gotten calls by GM’s and representatives from other teams inquiring about Kolb. Teams talk all the time and it would be foolish for the team not to call and let the Eagles know that they had interest in Kolb, but those calls really mean nothing when it comes to getting an offer.

but I don’t think they’ve gotten a definite offer.

After The Trade Kevin Kolb Will Be Expected To Produce, Immediately

Reid On McGlynn & Dunlap At Right Guard; Translation – Right Guard In The Draft

G- come on man, You really think theirs not gonna be a back door move if they cant make a deal come draft day? This is how you’ll know, look for one of the teams thats intrested in Kolb to draft someone from a position they have no need for, if you see a team thats biggest need is QB and picks up a CB or OL even though they dont need either, thats the team the Eagles made a deal with and as soon as things go back to normal you’ll see a trade, mark it down!

The fact is, unless you’ve been to the owners meeting you don’t know what or what hasn’t been offered. As far as the assumption that “no competent GM would make an offer right now”–how do YOU know that? Were you ever a GM? Were you ever a highly placed official in an organization? Look who they’ve been linked to–Seattle–and look who runs the program–Pete Carroll. That should give you all you need to know. And why wouldn’t teams discuss offers now? If there are 7 teams that need a QB, and all of them view Kolb as the answer, unlike the 1 year wonder out of Auburn, Cam Newton, or Blake Gabbard, why wouldn’t you jockey for position to let the Eagles know this is what you’d be prepared to offer? It’s called due diligence. According to PFT.com, Leslie Frazier even came out and said they would consider Kolb.

Im buying Garry’s logic here. I dont see why a team would make a definite offer right now. I know plenty of teams will CONSIDER going Kevin Kolb, but there are no concrete deals or anything yet… On the other hand this seems totally consistant with something the Eagles front office would do in order to create buzz and drive the discussion hoping to get someone to bite…

I aint mad at them right now.. Front office needs to get it done and if that means playing rumor and inuendo game? fine

I’m with bobbyuk – if you are competing with 5 or 6 other clubs, why wouldn’t you start the bidding? First guy in sometimes cuts the other out before the freeforall begins. Come on G, haven’t you ever negotiated a contract?

Garry doesn’t BUY the report. Me? I don’t CARE ABOUT the report, not one bit, at all.

Whats the point of following all these reports, heresay, speculation, rumors? It’s all a bunch of nothing until a deal is made. We don’t benefit at all from chasing them (well, Garry gets ad revenue but that’s just him).

Look, if you enjoy it, go for it. I’m not trying to tell anyone to not have fun. But me, I don’t find ‘someone heard from someone that this might happen’ very interesting at all.

You’re probably right G. It sounds like the Roseman PR machine hard at work to me too. Last year I’m pretty sure they wanted a first round pick for McNabb, but without somehow getting that out into the media maelstrom early on it left teams to decide that they didn’t want to give up a vaunted first round pick. This year they decided to do things differently and with there being essentially no NFL rules right now I’m pretty certain all FO’s look at the environment like it’s the Wild, Wild West.

I think Seattle is the only team that would trade their 1st Round pick (#25 Overall)
I think the other 5 interested teams like the Arizona,49ers,Vikings,Dolphins,Titans, would offer their #2nd Round selections (which these would be from 38th to the #50 Overall selection)
I do not believe that the BIlls,Browns,Broncos,Bengals,Jax,Carolina are interested at all in Kolb.