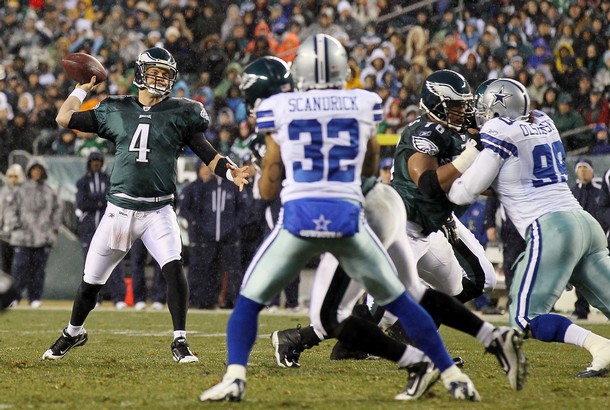 Ah, offseason rumors. Usually a bunch of hot air, but they are a lot of fun to talk about. It’s something for us to discuss while we wait for the next Phillies ace to take the mound.

Adam Schefter of ESPN is reporting that the Cincinnati Bengals have “floated the idea” of trading for Eagles QB Kevin Kolb.

“Make no mistake about it,” said Schefter. “The Bengals know they need to move on without Carson Palmer.”

This would contradict what team-wrecker Mike Brown has been saying publicly for the entire offseason. While Palmer insists that he’ll retire before he ever plays for the Bengals again, Brown keeps saying that he has no interest in moving him. For the sake of the public’s perception of Brown’s sanity, let’s just assume he’s blowing smoke.

What the Bengals decide to do with the No. 4-overall pick could be very telling. They know (we think) that they have to do something about Palmer, and his replacement is not on the roster. If they pass on Blaine Gabbert or Cam Newton (or never get a chance at either), do they come back in the next round and grab Colin Kaepernick, Jake Locker or Ryan Mallett if they get a chance? Oh, do tell!

If they don’t, one would have to think that that would tip their hand in free agency, if and when that starts. There are sure to be some other QB’s on the market, so if they ignore quarterback in the draft, it obviously doesn’t mean they are trading for Kolb.

And while I already said that most of these rumors are a bunch of nonsense, the fact that so many teams keep popping up in the Kolb sweepstakes is a good thing. There seems to be some kind of market for Kolb, even though we don’t know exactly what that is yet.

Let’s just play pretend for a second. Let’s pretend he ends up with the Bengals. If you are Kevin, you must be pretty sore at Andy Reid and the organization. You sit me for three years. Then you tell me I’m the starter. I get a concussion. I get healthy, and you make me the starter again. Sort of. Then you announce that I’m the backup again. Then you trade me to the Bengals.

We’ll see what happens. There has to be a lot office pools at this point on where Kolb will land.

Should Phillies Fan Be Climbing On The Phils In Game One?

That’s if trades will even be allowed which is not a given at all at this point..
But let’s say the Bengals trade QB Palmer to the 49ers for their 2nd and 4th picks, then I could see the Bengals giving up a high 1st Round pick for Kolb..
If Bengals do not get a 2nd and a 4th in Return for Palmer, then they would not give up thier 1st Round pick, in fact, they will not bring in another Veteran QB until Palmer’s situation is sorted out

I can’t see why Goodell wouldn’t allow trades to occur before or during the draft. It’s in the team owners’ best interests to be able to wheel/deal for whenever practice and/or play resumes, but who knows what’s going on behind the scenes. Frankly, if the NFL shuts down for the year I could care less, except that there are so many innocent people in/around football who will lose income which support their families.

Based on Cincinnati’s history drafting Qb’s….I would deal for Kolb.

I think Kolb is going to Minnesota or Seattle.

Hopefully we play the games.

iggles – When’s the last time an NFL trade went down that didn’t involve reworking of the traded player’s contracts? That’s the reason…

Wow – now Paulman knows what other teams will and won’t do – how arrogant.

dixiefan – now? nothing new there….

The Walrus was Paul too…

They shouldn’t do that to Kolb. I’m hoping that Mike Brown never oversees another winning season (not that he’s had many). I also hope Palmer keeps to his word. l also hope he’s not traded and that Brown gets nothing for his value. Is Mike Brown Paul Brown’s son? If so, boy the apple fell off the tree, rolled down the mountain and floated across the ocean, landing in a cess pool.

Mike Brown is indeed Paul Brown’s son and has run the Franchise into the ground over the last 20 Years that he’s been in charge.. He is perhaps the worst GM/Owner in the NFL and if it wasn’t for his family connection, He would most likely be working for a HR Block franchise in Cincinnati.. He knows as much as putting a real Team together and running an organization as my pet doggie does..
I really see no interest from the Bengals for Kolb, they will draft a young QB in the 2nd or 3rd Round and battle with the Browns for the basement in the AFC North Division for the foreseeable future behind well run orgainizations like the Steelers and Ravens..

Mr. Cobb, you write as though Kolb getting shafted, give me a break, he could start at cincy command millions, sorry, can’t feel sorry for him and the other athletes, even amatuers now, who you cry a river for, check out the real world sometime and get back to us

Aye I can see Kolb going to Cincy……. Carson Palmer getting traded to the Titans….. But Palmer is currently in the same shoes as Drew Bledsoe….. He’s a statue within the pocket who has made terrible decisions with his judgement on the field……. But he doesn’t have a young guy breathing down his back like Romo did Bledsoe at the time when he was in dallas……. Palmer is done for….. He’ll be a product of the UFL within due time….. LOL! Maybe a bit too far…. But I didnt see anything from Palmer last year to make me think otherwise!!!!

different author, same attitude, who cares if Kolb shafted by having to play for the bengals, what a joke, maybe you care gotta because you don’t have to bust your ass to make a living and have things handed to you like these cry baby athletes, former athletes