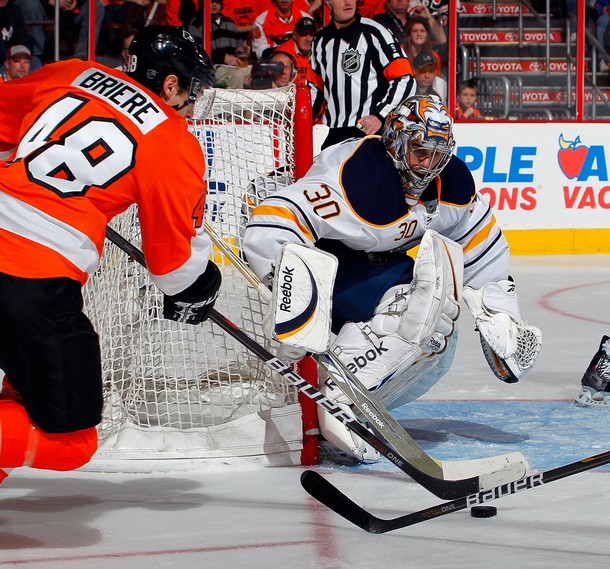 The second meeting of the 2011 playoffs between the Philadelphia Flyers and Buffalo Sabres was a much more belligerent affair than the first, with a 3-3 score, a fight, and Philadelphia’s goaltender pulled within the first fifteen minutes. The Flyers held on for the victory, though, and tied the series with a 5-4 win.

Coach Peter Laviolette opted to keep the line-up intact after game one’s loss, meaning that Chris Pronger was still too hurt to play and Nikolai Zherdev was still considered too risky for playoff hockey.

The Flyers offense sputtered at the start, but Claude Giroux got the ball rolling at the 4:00 mark after weaving through Buffalo’s defense and firing high on goaltender Ryan Miller.

An ill-timed roughing penalty on Scott Hartnell and a questionable hooking call on Kimmo Timonen shortly after presented Thomas Vanek the opportunity to tie the game with the man advantage. Sergei Bobrovsky, scrambling between the pipes, lost his ground and couldn’t stay positioned. In his defense, neither could his teammates.

“It was a little bit chaotic in the first,” said Sean O’Donnell. “It seemed like we worked hard for our [goals], and then we would get ourselves behind the eight ball with some bad penalties and some bad pinches.”

Dan Carcillo, whose presence in the line-up is regularly debated whenever Zherdev’s name is brought up, followed a strong start to the period with the third goal of the night, giving the Flyers the lead again. Kris Versteeg threw the puck through the crease and “Carbomb” stopped it with his skate, pushed it to his stick, and scored while pinned by the Sabres defense.

Although he isn’t what you’d call a “difference maker,” Carcillo has matured considerably over the last season and a half. He’s not the liability to the referees that he used to be and chipped in well tonight in a fourth line role. His goal easily falls into the category of what the team spoke about needing after game one- the second and third opportunities around the net.

“A goal like Danny Carcillo’s is a goal we’re going to have to score in the playoffs,” said O’Donnell. “McCormick, for them, got one in the 3rd period. It’s not a fancy goal. You just throw it through the middle, through the paint and just battle your guy. Whoever wins gets the goal. Danny’s goal, we need more of those kind, where you just go in, stop in front, wait for something, and bang away.”

The Sabres were soon awarded another powerplay and, for the second time in less than 10 minutes, Vanek scored. Bob was unable to corral the puck from the side of the net and no one could control Vanek, who hacked at the puck until he sneaked it through Bob’s pads.

Bobrovsky didn’t last much longer as a 3-on-1 caught the Flyers off guard and the Sabres took the lead for the first time. Sekera, holding on to the puck, waited until Bob went down in the butterfly and then roofed it over his shoulder. Bob, having let in 3 goals on 7 shots, was relieved by Brian Boucher.

James Van Riemsdyk, showing haters why he’s every bit the player that Patrick Kane is, tied it minutes later. Although Bob deserved to be pulled, it’s fair to point out that Miller also let in 3 goals on 9 shots by then.

The second period was marred by penalties for the Sabres, who paraded to the sin bin for 9:49 of the period. Though the mess that is the Flyers’ powerplay was only marginally successful (it was 1-for-10 on the night), it tired the Sabres out. Leino gave the Flyers the lead while his linemates teamed up for the 8th goal of the night, when Hartnell threw the puck on goal and it bounced off of Briere’s skate.

A too many men penalty called late in the second was only the first of a string of penalties that would plague the Flyers for the remainder of the game. The Flyers went shorthanded three more times in the third period, as the referees attempted to even up the calls made against the Sabres.

“To the ref’s defense, it was a very chippy game,” said Danny Briere. “It was a tough one to ref. They were put into a tough position… at the end of the night, it all evened out.”

In the end, Philadelphia skated away with the win, but neither team left the Wells Fargo Center with the momentum. Both games thus far have been decided by one goal, and each team has its own issues to deal with. For Philadelphia, it comes down to the powerplay and goaltending.

Laviolette wouldn’t comment about who his starter will be for game three, commenting, “We don’t have a starter, per se. Are you asking for the #1? We skirted that #1 question for the whole year. Yeah, we don’t talk about goaltenders.” Logic says that Laviolette will go with Boucher, but Bobrovsky has also been given opportunities to bounce back after tough losses, and the same may come into play here.

At the other end of the ice, Miller played an average game. His shutout in game one didn’t phase the orange and black.

“You have to give [Miller] credit,” said Danny Briere. “He was very good in game one, but if we keep taking 75 attempts on net every night, he’s not going to be able to save every single shot.”

Sixers Let A Great Opportunity Slip Through Their Fingers