Report: Group Of Players Want A Seat At Mediation Table 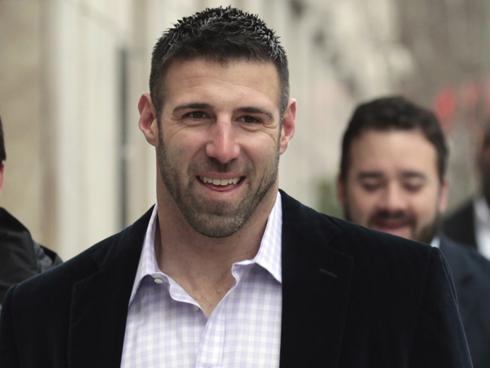 According to ProFootballTalk.com, they didn’t like the fact that the players left the mediation session.

Here’s what Albert Breer of NFL Network spoke to NFLPA representative Mike Vrabel, who is a member of the negotiating committee which is sitting at the table with the NFL owners.

“That’s why we’re here. That’s why Ben [Leber] and I are here,” Vrabel said. ”We’re players here to represent players and De works for us. They do (have a seat). And if they’re unhappy with that seat, we have to vote in a new executive committee, and a new board of reps.”

Breer tweeted the following about his conversation with Vrabel about the story at about 2pm..

Asked Vrabel directly if he’d heard about @dkaplanSBJ report, that other players wanted seat at talks. He told me, “No. But they have one.”

Vrabel unaware of any specifics on players splintering but as 4 seat at talks “That’s why we’re here. That’s why Ben (Leber) & I are here…

Vrabel cont: “… We’re players here to represent players and De works for us. They do (have a seat). And if they’re unhappy with …”

Vrabel cont: “… that seat, we have to vote in a new executive committee, and a new board of reps.”

This happened numerous times during the strike of 1982 and 1987, which I was integrally involved with. It’s much easier for players to get an audience with the fans because of the internet with Twitter and Facebook, so readily available.

I don’t think this is a big deal but the NFLPA had better get on top of this quickly.

NFL Mediation Talks Will Stop For About A Month

This is getting messier by the week…The more players get directly involved, the harder it will be to reach a concensus and settlement.. This is not good news at all if the Players are not on the same page is this is the chance they took by Decertifying in the first place where now, they don’t technically speak with 1 Voice, 1 leader with the same priorities… (I am sure the Owners are enjoying this behind closed doors… what a mess…)