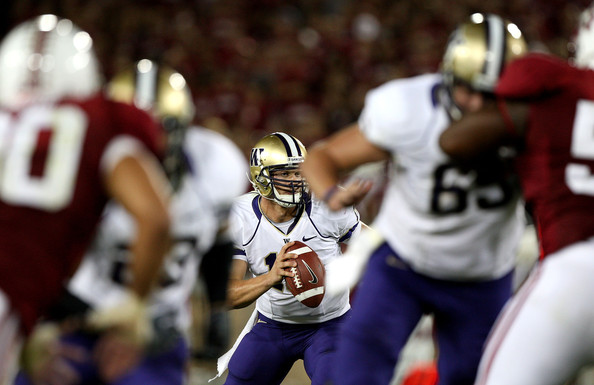 There are quite a few NFL teams with quarterback needs. The number could be as high as half the league, but those teams aren’t interested in drafting a quarterback with a pick in the top ten or fifteen, unless they can get Cam Newton or Blaine Gabbert.

This puts the Eagles right in the middle of that area of the draft, so there’s a good chance they’ll get an offer to trade down in the first round. That will likely give them a chance to add a pick or two, so they can get their offensive guard or tackle then grab a talented young cornerback, who can play immediately in that right cornerback position.

Trading up would cost them a pick, so it’s not likely to happen. If the Birds could turn that number 23 pick into two-second rounders so that they wind up with three of them, I think they would be happy, especially if the first second rounder is before the 42nd pick in the draft.

If that happens don’t be surprised if the Birds select a defensive end along with the offensive lineman and cornerback.

Back to those quarterbacks which are expected to start going after the twentieth pick in the draft.

Washington’s Jake Locker is highly regarded by some, but he’s got some question marks. He is likely to be available late in the first

TCU’s Andy Dalton proved he could win at the college level. He’s considered a fit for the west coast offense because he’s accurate but doesn’t possess a strong arm. Dalton is a good athlete, who can buy time with his legs and make throws on the run.

Ryan Mallett of Arkansas has great size and arm strength. He may have the strongest arm in this draft, which gives him the ability to

make all the throws needed. Mallett has rumors of substance abuse hovering over him, but all he needs is one team to believe in him and he will be drafted late in the first round.

I was impressed by Nevada’s Colin Kaepernick because of his blazing speed, outstanding arm and instinctive feel for the game.

The stock of Florida State’s Christian Ponder has been improving but there are questions which remain about arm strength and he’s considered a project of sorts.

“We’re open to explore any options that we think make us better,” Roseman said yesterday. “Whether it’s moving up or moving down, we’re open.

“I wouldn’t be shocked if we drafted there [at 23]. I also wouldn’t be surprised if we got a great offer and moved down. We’re open to all those options. We’re in a great place in the draft for somebody to get some of those quarterbacks.”

“People are interested in moving up,” he said. “They know right around where we pick, if they want to get a quarterback and want to make sure they get the one they want, I think it’s an area you can come and move to.”

I don’t think the Eagles will have a trouble in finding a team to trade down with, but the key is getting the right player. Making adept trades means nothing if you draft a player who can’t play.

How Worried Should The Phillies Be About Raul Ibanez?

Here’s What Went Wrong For The Sixers Last Night

I expect the following Trades to happen on Draft day

The Redskins want to move up and lots of teams wnat to trade back to aquire more mid-round picks like the Seahawks ,Saints & Dolphins

I think the Eagles are targeting 2 Specific players at #23
DT M Wilkerson from Temple & CB J Smith from Colorado
If neither of these players are on the board (which is most likely the case)
then they are trading down,back and out of the 1st Round all together
The Best Values of this Draft are between the 30th-125th Selections (2nd thru 4th Rounds) and if the Eagles can trade up and down and get 4-5 picks in this range, they could end up with some good players… Since the drafted 13 Rookies last year, I really don;t see them ending up with more that 8-9 pikcs in 2011, they will trade some picks to move up or to exchange for 2012 picks

” Making adept trades means nothing if you draft a player who can’t play. ”

And there my friends is the problem..not many of the players we choose in the later rounds can play…in my opinion

Gotta is right. None of this really matters unless they can draft the right players. You know the ones that aren’t coming off of major knee surgeries. I would rather see them move up to try to fill holes with the right players vs. drafting 7 DEs and hoping that one will work out. Then they can fill the other gaps with FAs assuming that there is a season. Too bad they can’t move Kolb now.

DE A Smith has a bright future in the NFL if he gets with the right team,system and good coaches.. He would be a stud for the Eagles under Coach Washburn…
Here is a little list of 2nd Tier DE’s who I think would be great fits for the Eagles and in their 4-3 Scheme under an attacking style of Coach Washburn

These players will be on the board in the 2nd/3rd & 4th Rounds and I wouldn’t be surprised if the Eagles grab one of them..

Trading down decreases the relative probability of selecting a difference maker. The Eagles shoddy draft record on defense suggest they should gamble on guys rated as high as possible, since their evaluations stink. Jerome Mcdougle and Daniel Te’o last year are vivid proof of their ineptitude. Trading down is only smart if you can draft well, which the Eagles don’t. A multitude of picks last year, any studs?!

ONLY IN PHILADELPHIA WOULD THERE BE AN OFF SEASON WHERE EVERY ONE NEEDS A QB, AND WE HAVE ONE TO TRADE BUT CANT BECUZ OF A LOCK OUT!!!

The Eagles will get a #1 for kolb in 2012, then if they trade down and out of their #23 Selections this this year, they could potentially have 3 1st Rounders next year when there is a Rookie Salary Cap in place.. 2012 will be the Season..
2011 will be a washout as it will be for most teams due to this lockout stuff
and all the unknowns, lack of OTA, practices, Rehabbing at Teams facilities,new coaches,etc,etc..
It will be sloppy Football all across the NFL and probably a shortened season which in Philly luck will have the Eagles win a SB and no one will care or consider it legitmate, due to all the morass of a lack of a CBA .. Good grief..

OK I changed my mind. I just watch highlight film of jimmy smith. forget OT if this kid is there draft.

With 10 Draft Picks (the last 2 picks in the 7th Round are Compensatory pick awarded bty the NFL and cannot be Traded), I think the Eagles want to get down to about 7-8 Selections this year and try to package a couple of picks to trade up, trade down and or trade for some 2012 Draft Picks..
I think after the wheeling and dealing is complete, they will end with about 8 Draft Selections total breaking down like this.
2 each the 2nd & 3rd Rounds (from about the 40th to 100th Players)
1 in the 4th and 5th Rounds and the 2 Compensatory Picks in the 7th Round.

They need to hit on these top 4-5 Picks and come out with players who will compete and fit their schemes and hopefully see the field some in 2011 and be in position to compete for a Starters spot come 2012 or at least be a very valuable Rotational/Special Teams player..