Mystery In The Crease: Who Starts Game Six? 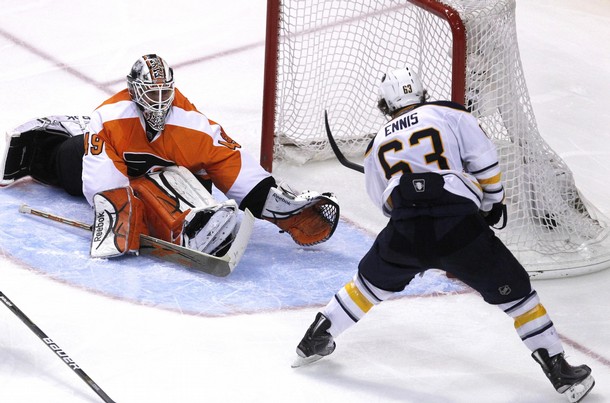 Ah, the good ole’ days of Bernie Parent. Where did that time go? If only the Flyers could only find a goalie with half the talent of Parent, the team would have no trouble advancing through the playoffs.

Unfortunately, the Flyers have been reminded that sometimes, it’s not possible to win a series with multiple goalies, let alone three goalies, coming in-and-out of the net.

With a must-win game approaching on Sunday, there remains one giant question: Which goalie starts?

Before his Game 5 implosion, Brian Boucher was the best goalie from a statistical standpoint. Boucher is the only one of the three to win a game in the series after winning his first two starts and posting a 1.69 GAA in those two starts. But yesterday’s performance was dreadful. He looked very lazy in net, having moved off his post on multiple occasions as the Sabres were able to capitalize on his mistakes. Because of his poor start in Game 5, head coach Peter Laviolette turned to a seemingly forgotten goalie: Michael Leighton.

During the regular season, Leighton made zero appearances, spending most of his time (30 games) with the Adirondack Phantoms. But Leighton was called up to the Flyers during the postseason and appeared in his first game of the season with a 3-0 deficit in front of him. However, Leighton played incredible between the pipes as the Flyers made a furious comeback, pushing the game to overtime. But an unlucky rebound bounced on to the stick of Tyler Ennis, and with that, came a disappointing loss for Leighton. Before the goal,

the Ontario native saved 20 shots and looked quite impressive before Ennis found the back of the net.

And then there’s Sergei Bobrovsky. Without him, the Flyers might not have been the #1 team for the majority of the season. The rookie phenom finished with a 28-13-9 record and a 2.59 GAA mark. Named the starting goalie for the postseason, Bobrovsky’s time in net didn’t last long — 12:30 into Game 1. Bob allowed three quick goals and made only four saves before his postseason debut concluded. That was the last time we’ve seen Bobs on ice, and judging from recent events, I wouldn’t expect to see him the rest of the postseason.

Although, I believe Bob is a great goalie, I don’t think Laviolette will turn to the rookie again this year, let alone in a must-win situation.

That leaves two goalies left: Boucher and Leighton. The clear front-runner would appear to be Boucher because of his proven track record and dominance prior to yesterday’s game. Leighton, on the other hand, looked good yesterday, but that was his first appearance all season.

Can Leighton stay strong between the pipes with very little playing time in 2011, especially in the biggest game of the season? How about Boucher, can he bounce back in Game 5 and deliver the Flyers a win? And don’t forget about Bobrovsky, but is he in the right state of mind to step back in net after sitting the past four games?

Every goalie has questions surrounding themselves, but ultimately, one of them will get the call in Game 6. In my opinion, I am going with Boucher in Game 6.

How about you guys? Boucher? Leighton? Bobrovsky?

For Sixers, Today Is A Matter Of Pride