Phillies Continue To Roll, But They Haven’t Been Tested, Yet 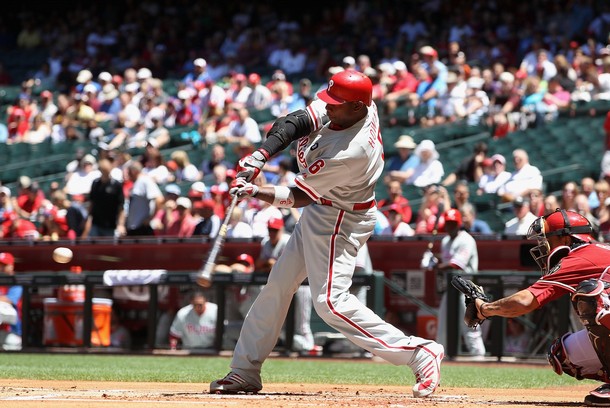 After almost 30 games played in this 2011 baseball season, the Phillies, by just their record alone, are one of the best teams in baseball.

At 20-9, they own the top record in the National League and are tied with the Cleveland Indians of all teams for the best in Major League Baseball.

As expected, the pitching staff is superior – an ace in the deck just about everyday. Roy Halladay, clearly the best pitcher in baseball, Cliff Lee, Roy Oswalt and Cole Hamels all have ERA’s below 4.00. Furthermore, if Vance Worley continues to pitch in place of Joe Blanton, his is a not too shabby 0.75.

While the hitting has occasionally caused the fans to pull their hair out and use words of profane nature, it’s safe to say most people would take this lineup over most in baseball any day of the week.

Placido Polanco continues to be one of the best contact hitters in the sport batting .374 with 21 RBIs and Ryan Howard is a premiere power hitters in baseball, sending off six majestic home runs into orbit and producing 29 RBIs at a machine-like rate. The rest are streaky enough to where if all eight players put it together at once, watch out.

Lastly, the bullpen has been surprisingly good. Everyone but David Herndon and seldom-used Mike Zagurski have ERA’s under 4.00.

With all of the above, it is obvious – this team is not good, but great.

However, I have to play the role of fun police as I noticed something about the Phillies first 30 gamee on their 2011 schedule – they haven’t played anybody that good.

The squads which the Phils played so far are the Astros, Mets, Braves, Nationals, Marlins, Brewers, Padres and Diamondbacks. Only two of the teams, the Braves at 17-15 and Marlins at 19-10, have a winning record. All of those ball clubs combined are 112-129. In addition, it’s hard to compare the Phils against the one team with a great record, the Marlins, because they only played them twice to a 1-1 record.

So after the Phils sweep the Nationals today, because they will (Halladay is pitching), the next three weeks of baseball go as follows – Braves, Marlins, Braves, Cardinals, Rockies, Rangers and Reds.

Often we hear the same clichés over and over again. One of those is beat the teams who you are supposed to beat and go .500 against the squads that are better than you.

In other words, always beat those who are bad and do OK against those who are good. But, if the Phils go .500 or anything close to that in the next 20 games after today, it’s not a good sign.

The Phillies are elite. Anything less than 13-7 is alarming because there are seven series and two of them are two-gamers (May 16-17 at St. Louis and May 18-19 vs. Colorado). If the Phils go 13-7 or better, that probably means they won every series and tied the ones that are only two games.

Defeating bad teams are easy, icing on a cake. But taking care of the good teams is a sign of dominance and states that you are unbeatable.

With the Flyers on the brink of elimination again and football still in limbo, the next three weeks will be a great chance for Philly fans to see what this baseball team is made of.

Vick Disagrees With Mendenhall About Osama, “He Deserved Every Bit Of It”

Can Worley Force His Way Into The Rotation?

I predict Phils don’t lose another game the rest of the Season and
Cole Hamels is League MVP & Cy Young Winner as he finishe’s 28-1
On a side note, Domonic Brown shockingly retires from Baseball and signs
with the Philadelphia Eagles as a Free-agent to play CB (which he used to play in High School & Pop Warner Football)
Good Article Dave and the next month will give us a better gauge on how good this team really is since they will be playing better teams and with so many games with the FLoria and Atlanta this team could really catapult it’s lead and completely run away from the rest of the NL East and considering that some of their injured payers could be returning soon like (Ruiz/Utley/Brown/Contreras/Lidge) has been most impressive

David,who beats them in a 7 game series?

Dont forget they’ll be tested by Rocks,Rangers,and Natti.I like our chances with how these guys are dealing.

Scared of what, I have no vested interest on whether the Braves come back to make a race out of it though I think they will and now with the return of Starter Rhp J Jurrgens, they have been playing some better ball. The Braves have too good of pitching to not make a race out of it and still lots of games to be played..

Giants still match up well with the Phils as do the Reds & Rockies..

Paulman grossly underestimated phils pitching, especially starters, now will have to back off prediction of only 92 wins, birdo knows more than paulman, sorry paulman

No ap;ologies neccessary and I did not underestimate the Phils Starting Pitching, but I have been pleasantly surprised on how consistent and well the Bllpen has pitched the 1st month of the Season (I”ll be honest and state that I thoughtthey would have blown 5-6 games by now, but they haven’t and have done a gret job..)
What’s the Status of Ruiz.. They can’t afford to have him out for any long period of time, Schneider is more than a capable back-uip but Ruiz is the real unsung Leader of this team and it’s heart and soul if you ask me..

They bottom line is that the Phils bullpen has been light years ahead of the Braves bullpen which before the season seemed to be the Braves only advantage. Phils Bully has blown 1 save, Braves has blown 6. Their pen is in much worse shape than the Philly pen.

Also the lineup works much better now with Jimmy, Victo and Polly in that order. Best hitter on the team batting 3rd. They have also done this with no production from LF, C or 2B. I feel bad for the rest of the NL if they start to get some hits from there. And every day is closer to getting Chase back.

As far as the Reds go, their SP is suspect at best. 4.59 ERA. Not exactly scary. ROX are a good team, but they have been slumping lately and so have the Giants. 1 of those teams probably doesn’t make the playoffs

I agree Bugs and good analysis,
The Biggest surprise/disappointments for NL Teams so far has been
the way the Braves Bullpen has pitched and how the Red SP has been (which is not very good as you pointed out) ..
There is talk for the Giants making a play for Mets SS Reyes which would give their offense a boost
If the Phils can score 4-5 Runs a game consistently, they should dominate the NL due to thier Starting Pitching.. They have gotten off to a good start and your right, that theleague may have to take some cover whern they get healthy.. Then 1-2 months will seperate the good teams from the average/poor teams and right night it’s the Phils out on Top..

Agreed. A lot of tough teams coming up. I think that the team that no one has mentioned is the Brewcrew. Greinke just got in the rotation and Gallardo hasn’t been very good, but if they come close to their past performances then that is a top 5 rotation in MLB. And of course their lineup is nuts.

Reyes to SF would be a great move for them. As much as I want him out of the NL East, I don’t want him on the Giants.

The Giants can give us trouble, but I thnk the Reds will be a cakewalk, and the Rockies we can beat pretty easily too.

Come on Phils! We pretty much need to carry the same record we had the first month of the season into the next 5 months of the season and we will reach 119 easily! Unlike P(nis)man, I’m ROOTIN’ for y’all to do it!