What Will The Eagles Do With Linebacker Stewart Bradley? 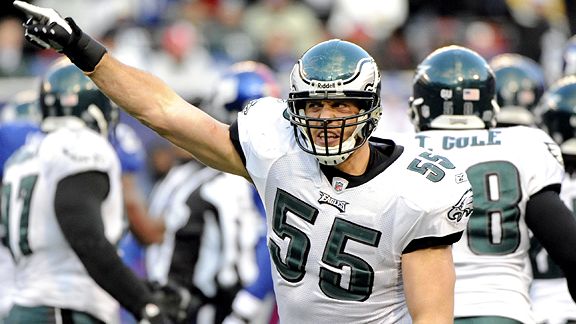 There are huge questions surrounding Eagles four-year linebacker Stewart Bradley, when you think about or discuss what the Eagles linebacker situation will be going forward.

Bradley was drafted in the third round out of Nebraska in 2007 and the former Cornhusker became a solid special teams contributor and started one game in his rookie season.

The big guy had a good year in 2008. He made a total of 151 tackles with one sack and one interception. His ability to play middle linebacker was very helpful to then-defensive coordinator Jim Johnson, who had nobody else to play the position.

Bradley was considered by many to be on the edge of being a star in this league. He did a fairly good job against the run, but his

strength was surprisingly versus the pass.

Although he has great size at 6’4″ and weighs 258 pounds, he can run and change directions very well like he’s a much smaller player. There was tremendous excitement ahead for what Bradley would be able to do after getting a year of experience under his belt.

In 2009 with number 55 positioned as one of the anchors of the defense, he tore up his knee at the Eagles annual Flight night practice during training camp. It caused him to miss the entire season.

He worked hard to recover for 2010 campaign, but in the first game of the season against the Green Bay Packers, Bradley suffered a concussion when he was kneed in the head. He returned after a week off, then started the next 11 games before being hit with the

During those 11 games, Bradley was average as a middle backer. He had 88 tackles with one interception and one sack. The defense had their ups and downs, with more downs than ups.

He dislocated his elbow in the Dallas game and missed the final three games of the season and the playoff game against the Packers.

During his time on the shelf, rookie middle linebacker Jamar Chaney stepped in and played well.

Now the question is: What are the Eagles going to do with Bradley going forward? Is he going to be a starter at middle linebacker spot or will they start Chaney in the middle and move Bradley to the strongside?

In addition to Chaney, the Eagles drafted Oregon linebacker Casey Matthews in the fourth round. They then drafted Ohio State linebacker Brian Rolle in the sixth and UConn linebacker Greg Lloyd in the seventh.

it during training camp.

I think they should move Bradley to the strongside at Sam linebacker and start Chaney in the middle. I think that allows them to put their best linebackers on the field.

Bradley with his height, strength and speed would be a good match up against the league’s tight ends.

Chaney is the best big play linebacker the Birds have had in a quite a while.
What do you think they should?

Will Oswalt Be Distracted As He Returns To The Rotation?