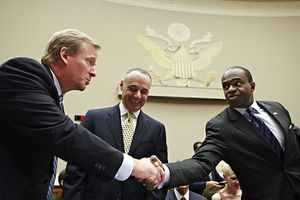 According CBS Sports Mike Freeman a source close to the NFL negotiations has told him that a labor agreement is imminent. Freeman’s source went even further than that with optimism.

“One source with intimate knowledge of the discussions tells me negotiations are 80-85 percent complete. They’ve made such fast progress, I’m told, it’s catching many of the principals by surprise. Some are now canceling vacations, believing an agreement will be reached within a matter of days.”

Word is that the talks have begun to get very detailed and specific, so the owners and players have summoned their lawyers to rejoin them in the talks.

The deal hinges on how much the NFL can grow in the near future. The owners want the players to take a smaller percentage of the revenue, but the players are only willing to do it as long as they have some type of guarantee on control on the revenue pie increasing.

The players don’t want to leave a door open so that the owners can agree to take less money from the networks for something that benefits only them. There’s talk about putting a team in Los Angeles and how their need and desire for a team will be filled.

Bringing in the second largest metropolis in the country is sure to increase the revenue and help to encourage the players to take a lower percentage of larger revenue.

My crack-head top Sources told me that the Chinese are going to make up for the remaining 15%-20% and contribute major $$$ to both the Owners and Players but will have the following stipulations.
#1) All Teams will now have to carry at least 2
Position Player of Chinese descent (Kicker/Punter doesn’t count)
#2) All Teams will have to play the Chinese Anthem and have Chinese Halftime sponsored Entertainment whether it’s Music Bands,Tumblers, Gymnatics,or Martial Arts demonstartions,.etc,etc
#3) The Super Bowl will now be played on Chinese soil rotating between Hong Kong and Bejing
#4) The Los Angeles Franchise will be nicknamed the “Dragons”….

i also heard that the “crane technique’ will be a new style of tackling to reduce concussions.

And they will have to drink “tiger blood” energy drinks or they void the deal.

The Patriots,as usual, are one step ahead of everyone else already having
Safety Patrick Chung on their Roster.. That genius Bill Belichek sensed this coming down with the Chinese 3-4 years ago..

You guys are hilarious. PAUL you have too much time on your hands. LMFBO! I hope this report is true. I’m starting to get excited now, for the prospects of trades & free agency on the horizon.

This Lockout has killed my Sports Jourrnalism career since I now have nothing to write,report,complain and even make up about ..So no I am trying my hand at Comedy Writing for I hear lots of chicks dig that…

Chicks dig the long ball & big sticks. That’s why I have a harem. Paul you reverted to comedy, soooooooo!!! 😀

I’ll plan for Lehigh. This is great news.Glad the millionaire and billionaire crybabies are getting along. Go Phills.

Paulman, doss this mean that if Andy Reid fails to bring home a superbowl nex t season, he gets executed by the Chinese Gov’t?

Not at all Muimuiman, just teh opposite…
As a follower and student of “Chinese Torture”, they Chinese will annouce a lifetime contract to Coach Andy Reid for they really get a kick on watching a real live ” Summa Wrestler” make it, to Coach in the NFL. They will also the will make Coach AR wear Oriental/Chinese Shirts instead of the flowery Hawaiin Shirts Reid has been wearing lately at all outside appearance and teams media interveiws, draft weekend, etc,etc… Good Grief ..

Thanks boys, the best comments I’ve read today, now back to realGM for more NBA rumors/talk.

MUIMUIMAN, he’s going to get the Chinese waterboard torture treatment. BTW, how many feet of linen did it take to make those shirts. He’s gotten so big it looks like your watching a 3D movie of Hawaii 5 O off of his back. JEEZ! Andy worry about your health, & put down the fork.