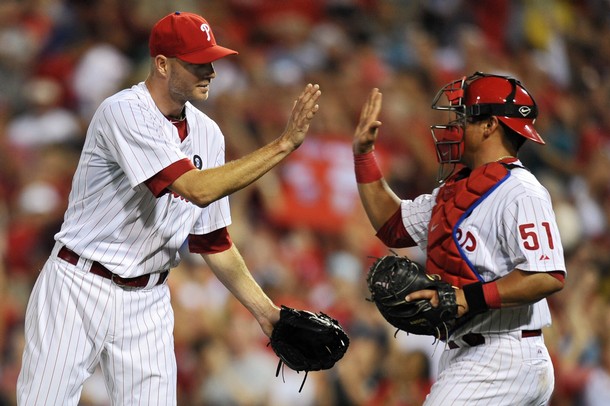 It’s reminiscent of the 1930’s comedy sketch, “Who’s on First”. But in this case, the question surrounds the ninth inning and the closer’s role. So maybe it’s more of a “Whose Inning Is It Anyway?” type of situation. Because, quite frankly, nobody knows who’s going to come out for the seventh, eighth, or ninth innings anymore these days.

Once Brad Lidge comes back, there will be three possible options in the ninth inning. However, with all the rumors surrounding the Phillies this trade deadline, there’s a good possibility someone like Heath Bell or Leo Nunez could find themselves in the Phils’ pen.

So who gets the job once Lidge is healthy again?

Antonio Bastardo has been one of the best relievers in baseball this season. He is currently the owner of a sub-one ERA and has allowed just 13 hits compared to 43 strikeouts over 36.1 innings. He is young, though, and doesn’t have the postseason experience as someone like Lidge or Madson does. With that said, Bastardo will find himself as the setup man down the stretch.

Madson has come back strong off of his stint on the DL. On the season, Madson has accounted for 15 saves in 16 opportunities to go along with his 36 strikeouts. He’s been a very effective closer in 2011, but there’s still that question of whether or not he can keep it up, because we all know how he struggled with the role in seasons prior. But for now, Madson will be the closer.

Lidge is an interesting option. He is being paid to be the closer on this team. But with the emergence of Bastardo and the success of

Madson this season, his role is in jeopardy. Out of the three in-house pitchers, Lidge is the least likely to close out games. I’m sure he’ll get a few chances when he comes back off the DL, but I don’t see him overtaking someone like Madson or even Bastardo. He will see time in the seventh inning and eighth innings down the stretch.

Personally, I would love to see Bastardo as the closer, but Manuel has suggested that Madson will regain the closer’s role once he gets back into the swing of things.

However, the closer’s role might not belong to any of the aforementioned pitchers if the Phillies go out and acquire someone like Heath Bell. If Bell is dealt to the Phillies, he will assume the role of closer in the bullpen. He’s proven to be one of the best in baseball year-in and year-out. He currently is fourth in the NL with 27 saves.

Also with 27 saves on the season is Florida’s Leo Nunez. ESPN’s Jerry Crasnick recently reported that the Phillies have “spoken with the Marlins about Leo Nunez”. The Phillies would need to deal some starting pitching in order to acquire Nunez, so someone like Jarred

Cosart, Trevor May, or even Vance Worley could be discussed in the talks. If Nunez is acquired, he too could find himself as the ninth-inning man, But then again, he has pitched as a setup man in seasons prior so the Phillies could always return him to his former spot in the bullpen.

There’s about five options out there for the Phillies. Three of them are already on the staff, two would need to be acquired via a trade, but all five have legitimate reasons to pitch in the ninth.

My prediction for the Phillies closer is Madson, although I believe the Phillies will make a push for one of the closers on the market. As I said before, I love Bastardo, and I could see the Phillies using any combination of the team’s three current relievers down the stretch.

NFL Owners Vote To Lift The Lock Out!!!

Biggest mistake of charlies career if he does not keep ‘no daddy’ (my nickname for bastardo) as the closer.

It all depends on health & trade possibilities. Contreras is highly unlikely to return, & Lidge is a huge ??? If all are healthy, & the Phillies get Adams from SD. They are not getting Bell or Nunez. This is what I think, it will be.–
Madson- closer.
Bastardo & Stutes- setup.
Adams & Lidge fill out the rest of the innings, where needed.
Baez & Herndon are bye bye, by playoff time. Good f^@#ing riddance. Kendrick will be your long man if needed.
Bell I would love, & he would look nice closing for us, but it ain’t happening.

BWAHAHAHA you like that one huh? good points btw what ever they do please get rid of Baez.. I honestly think I could do better than him.

My PAL league, softball high arc pitcher is better than Baez. He’s the poster child of all of Amaro’s transactions. F^@#ing stiff!