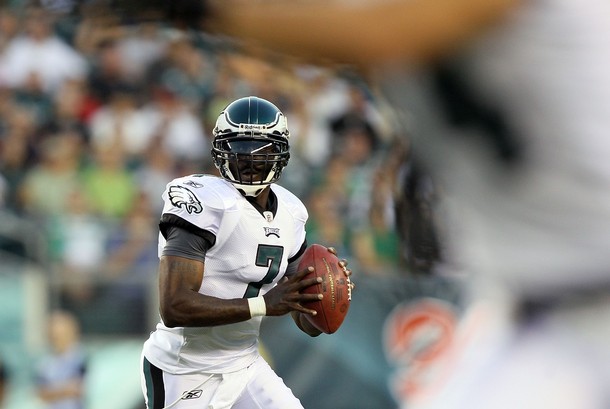 – It was only one drive, but it was good to see the first team offense move the ball without DeSean Jackson or Jeremy Maclin in the lineup. Jason Avant and Riley Cooper came up with 20 and 42 yard receptions. Cooper showed great concentration on his reception, adjusting to well to a ball that was a little underthrown, and following through and securing the reception despite coming down a little awkwardly.

– New offensive tackle Ryan Harris had some trouble against the Baltimore pass rush. He didn’t allow a sack on Michael Vick, but struggled against his assignments (particularly Terrell Suggs), leading to Vick being hurried on some plays. He’ll need to improve drastically if he wants to remain the starter when Winston Justice returns.

– The first team defensive line may have been the most impressive aspect of the game. The defensive lineman were very active, and constantly made their presences known against the Baltimore starters. As a group, they consistently overwhelmed the Baltimore offensive line against the run, and the pass. They sacked Joe Flacco once, and forced him into quick throws on several occasions. They were also a big reason that running back Ray Rice was held to just seven yards on five carries.

– New defensive tackle Cullen Jenkins was active and disruptive. He was involved on several several stops that held the Ravens to little or no gain. He delivered a crushing hit on Flacco several plays into the game.

– Darryl Tapp had a particularly strong game. The former Seahawk looked quick and strong, and recorded two sacks in the game. Tapp didn’t contribute until late in the season in 2010, but he was a player that Eagles were high on, and he may be the next defensive end to flourish under Jim Washburn.

– It appeared that linebacker Jamar Chaney was the guilty party on the swing pass to Ray Rice that went for 27 yards and set up a Baltimore field goal. Chaney completely missed Rice coming out of the backfield, and by the time he realized it, Rice was already gone.

– It was a quiet night for new middle linebacker Casey Matthews, but with the defensive line stealing the show, there wasn’t much of an opportunity for the rookie to make plays.

– The fact that Vince Young attempted only five passes shows the limited understanding of the playbook he currently has. Hopefully Young will be able to make dramatic strides with the offense between now and the regular season. Michael Vick has only lasted a full season once in his career, so it seems likely that the Eagles will need Young at some point this season.

– Chad Hall had a strong game, recording five catches for 82 yards. There’s a place for Hall somewhere in the league, but it may not be with the Eagles once Maclin and Steve Smith get healthy. Either way, he’s going to make it as difficult as possible for the team to release him.

– Jaiquawn Jarrett did a good job on his interception of Tyrod Taylor in the second quarter. The rookie read the eyes of Taylor as the play developed, putting himself in position to make the interception.

– Mike Kafka still has a lot of learning to do. He panicked when faced with pressure, and forced a poor throw into coverage, resulting in an interception.

– Defensive tackle Derek Landri had a nice game. He got a chance to play with the first team, and pressured Joe Flacco into an incomplete pass. He used a good spin move to get around his blocker on the play. Later in the game, Landri kept track of Tyrod Taylor, and sacked him before he was able to escape and run.

– The NFL needs to rethink their new rules regarding kickoffs. What they’ve done is really take away from an exciting element in the game. Its a shame.

– Why challenge the Jason Avant reception in the endzone on the first drive of the game? The idea of the preseason isn’t to defeat the other team, but to grind the team into football shape for the regular season. The extra rep on the goalline was more valuable to the team than it would have been if they had reversed the call.

Washburn And Defensive Line Live Up To The Hype

Vince Young With Solid Night, While Kafka Is Up & Down