Should Manuel Have Left Halladay In To Finish The Game? 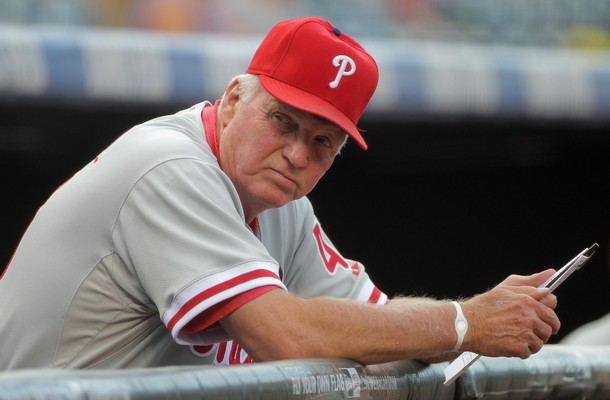 On Tuesday night, the Phillies let a winnable game slip away, falling to the Arizona Diamondbacks 3-2. Arizona trailed 2-1 entering the ninth inning, but rallied to score two runs in the final frame to lift them over the Phillies to take the first game in the series.

Manager Charlie Manuel put all of his faith in starter Roy Halladay’s ability, allowing the right-hander the opportunity to finish the game. It was a decision that didn’t pay off. The ace gave up back-to-back singles to start the inning, and then a two-run double to Lyle Overbay that gave Arizona the lead. After giving up the lead, the Cy-Young Award winner was able to settle down and get out of the rest of the inning, but the damage had been done.

The Phillies had Antonio Bastardo and Ryan Madson warming up in the bullpen just in case, but Manuel opted to stay with Halladay. “Kind of his game isn’t it? He’s my ace. That’s the way I look at it, if I was going to make a move, I’d have made it to start the inning”, said Manuel after the game.

Manuel was right to give Halladay the opportunity to finish the game, there’s no question about that. Before the ninth inning, the ace had only thrown 100 pitches, and allowed just one run on five hits. But after allowing a pair of hits to begin the ninth inning, there should have been much stronger consideration to make a change to either Bastardo or Madson.

Yes, Halladay certainly has the credentials to justify leaving him in the game anyway, but the reality is that he isn’t invincible. He isn’t truly “a machine” as many describe him. He’s human, and is capable of wearing down and tiring out like any other pitcher.

Manuel would not have left Cliff Lee or Cole Hamels in the game if they had gotten into that kind of trouble to start a ninth inning. He shouldn’t give Halladay special consideration, simply because of the right-hander’s name and reputation. If a pitcher looks tired, and not up to the level he had been at throughout the game, the manager should make a move that gives the team the best chance to win.

With a pair of more than capable closers available and well-rested, would it not have been such a ridiculous alternative to go to Bastardo (who has proven to be an excellent strikeout pitcher) to face the lefthander Overbay (who had already gotten to Halladay for an RBI earlier in the game), and then Madson? There isn’t any way of knowing whether or not the two closers could have come in and successfully cleaned up the mess, but it may have been worth a shot.

Manuel has a reputation for being loyal to his players. If a player has his confidence, Manuel is going to sink or swim with that player. It’s easy to second guess that manager when the decision that he thought gave the team the best chance to win didn’t pan out. Sometimes the manager looks like a genius, and sometimes not so much. In the big picture, this was a game with very little impact on the season, and only stands out temporarily because of the questionable decision’s that took place during it. While a case can be made for removing Halladay from the game, a case could certainly be made to leave him in as well. The Phillies’ skipper decided to remain loyal to his ace, and even though it didn’t work out, if he could do it all over again, he would not have done a single thing differently. Love it, hate it, question it, it’s the style of managing that has led Manuel to becoming one of the most successful managers in franchise history.

Roseman: “We totally anticipate Jeremy being part of our football team”