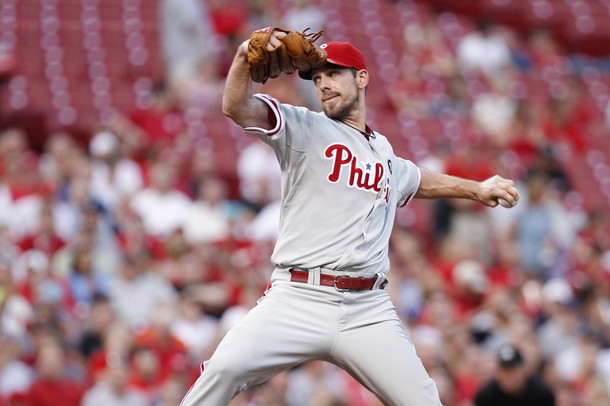 Cliff Lee has been nothing short of spectacular in the month of August. Entering Wednesday’s game against the Reds, the lefthander was 4-0 with an ERA of 0.58. He had allowed just two runs in 31 innings during the month. It would be the first time that the All-Star has pitched in eight days as a result of several rainouts the team received over the weekend.

Lee wasn’t bothered in the list by the extra time off, and served as the anchor in a 3-0 victory over the Reds. He lasted 8.2 innings, missing an opportunity for his elusive sixth complete game shutout of the season. He recorded the first two outs of the ninth inning quickly, but gave up a double to Joey Votto, walked Jay Bruce, and hit Miguel Cairo, prompting Charlie Manuel to make a change to Ryan Madson, who was able to strand the bases loaded to earn the save.

Lee was extremely efficient (which is saying a lot considering his normal standards). Five of Lee’s innings were 1-2-3 innings. He threw no more than 16 pitches through the first eight innings. He allowed six hits, struck out seven, and walked one batter.

As sharp as Lee was, he was helped along by some strong play from his defense. In the fourth inning, Joey Votto struck out swinging, and Carlos Ruiz was able to gun down Dave Sappelt, who was attempting to steal second. In the fifth inning, Chase Utley made a poor throw that went over the head of Ryan Howard, but Ruiz got to the ball quickly enough to throw out Ramon Hernandez on his way to second base.

The Phillies offense got Lee an early lead, when Ryan Howard drove in his 103rd run of the season in the first inning, scoring Shane Victorino on an RBI groundout. The offense had a chance to blow the game open in the second inning, but failed to capitalize on the opportunity. Reds starter Dontrelle Willis loaded the bases with just one out in the inning, but poor, impatient at-bats from Victorino and Placido Polanco put an end to the threat.

The Phillies would add a couple of runs later in the game. Hunter Pence hit a solo homerun to leadoff the sixth inning, and Chase Utley would pick up an RBI groundout in the seventh inning.

Though the offense wasn’t able to cash in on some of their stronger opportunities in the game, they gave themselves plenty of chances for runs, and were able to do enough to properly support Lee in this game. The hitters approached Willis patiently for the most part, and drew five walks off of the lefthander in the game.

The Phillies have now won three in a row, and will attempt to go for a four-game sweep of the Reds tomorrow afternoon when Vance Worley will oppose Mike Leake.

Player Of The Game: Cliff Lee

Cliff Lee didn’t let the eight-day layoff bother him at all, and turned in an excellent performance. Though he wasn’t able to finish the job in the ninth inning, he kept the Reds baffled throughout the game, and was the most important piece in this victory. It was the 10th start this season that Lee has not allowed a run. He earned his 15th win of the season, and completed an incredible month of August.

Ron Jaworski Sees Eagles Getting Off To A Slow Start

Right Now, 6th Round Pick Jason Kelce Is Ahead Of 1st Round Pick Danny Watkins