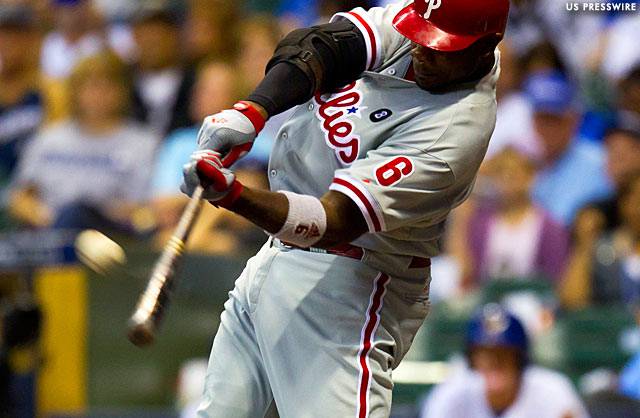 The Phillies just seem to keep right on rolling as they do battle with the two teams that are supposed to be their biggest competition in the National League. After defeating the Brewers behind the great pitching of Cole Hamels, and the clutch hitting of a diluted lineup on Thursday, the Phillies followed up that effort with a 5-3 victory on Friday night.

Ryan Howard gave the team a commanding 3-0 lead with a three-run bomb in the first inning. It was his 32nd homer of the season, and his 11th since the beginning of August. The first-baseman has continued to thrive in the late months of the season as he traditionally does, in addition to his 11 homeruns, he has driven in a total of 27 runs since the end of July.

Brewers starter Shawn Marcum has enjoyed a strong season, entering the game with a 12-5 record, and 3.11 ERA. However, he struggled heavily against the Phillies’ lineup, giving up five runs on nine hits, and walking four.

The early advantage was all the support that Roy Halladay would require. The right-hander put on one his stronger outings of late, allowing just one run on four hits over eight innings, striking out nine and walking three. He picked up his 17th win of the season, and lowered his ERA to 2.44.

Keeping Ryan Braun and Prince Fielder under control was again a key element in the Phillies victory. On Thursday, Cole Hamels held the All-Stars to a combined 1-8 at the plate. On Friday, Halladay also did a fair job of keeping the two offensive powerhouses from doing any damage, holding them to a combined 2-6 against him with no RBIs.

On a down note, Antonio Bastardo was asked to pitch the ninth inning in relief of Halladay, and didn’t perform well. The rookie gave up a hit and a walk to start the inning, and was then lifted from the game in favor of Ryan Madson.

Madson was brought into a challenging situation, working with two-runners on and no outs, but was able to get the job done for his 29th save of the season. The runners that Bastardo had allowed on both scored, but Madson was still able to preserve the win.

The Phillies have now at the very least secured a split against the Brewers, and will attempt to win their sixth game in a row tomorrow with the red-hot Cliff Lee on the mound.

Player Of The Game: Ryan Howard

The Big Piece made life a lot easier for Roy Halladay by giving him a nice three-run to work with the in the first inning. Not only did his blast take pressure off of his starter, but it also took some life away from the Brewers, who were hoping a fresh start would do them some good. Howard always seems to show up play late in the season, as the games take on bigger meaning.

Aerial Display By Rodgers & Brees Got Vick Excited For Sunday

No Timetable for Pronger Despite Health Improving

Ryan Howard is always a beast in September, an RBI machine, MVP candidate, yet the new fangled baseball stat geeks will find a way to criticize his play, Howard is money, old school slugger, it will be an exciting October, go phils

Funny how people on the blogs criticize howard all year long and then in September they look at his stats and have an ‘ah ha’ moment– damn another year of 35-40 homeruns, 120 rbi’s. yet the next year comes, he strikesout a couple times and they want to trade him
a writer on this blog i think it was Basens said about two months ago ‘all howard does is get rbi’s, but just how important are rbi’s to a team’– i thought it was a joke but it wasn’t
come on howard bashers jump on gcobb lets see you put down howard

He needs to show up in the playoffs.

I think the audition of Pence has invited better pitches.

This team looks better than the team that won it a few years ago.

@haveacigar, right on brother, it was some clown here or an article that said RBI s are overrated, can’t believe some of the crap you will read here

check out his playoff stats
http://www.baseball-reference.com/players/h/howarry01.shtml

compare his playoff stats at the above website to: Mays, Schmidt, Joe Dimaggio and Mr. October himself. Time for people to put the greatness of the phils core in perspective- instead of bashing it you need to realize this is the greatest era in phils history– yes its better than my beloved late 70’s/80 teams–enjoy this folks– if like me you were a teenager in the 70’s and a dad of a teenager now– man this is awesome

I wish to see Howard and Schmidt’s stats if they switched. I remember Schmidt batting after juan Samuel and Von hayes lol… love to see schmidt stats in line up of Rollins,utley,and pence

schmidt had ROSE, the bull, matthews, maddox- howards had pence for about 40 games. this is what i mean– you need to embrace this team not criticize. Sammy was an All-Star twice during schmidts time they played together. tonto is actually saying that schmidt played with chumps? unbelievable. wow!

And schmidt didn’t win jack until rose came to town, nice job haveacigar, this is the greatest ride of any Philadelphia sports franchise, maybe the flyers of the 70s, time will tell

Schmidt & Howard are the 2 greatest Phillies at their respective positions. Schmidt is the greatest all time MLB 3B, Howard has a long way to go to becomes all time MLB 1B. What is the argument? Schmidt in his day, I wouldn’t have traded him for any other 3B. Can you say that about Howard? NO!! I would take Pujols, Gonzalez & Fielder, right now, straight up for him. It isn’t that hard guys. I love Howard, so don’t call me a hater! I’m just being real.

the argument ddcar is with the clowns who say howard isn’t good, rbis don’t matter, not whether howard is betten than schmidt

right! 20 is the best phillie EVER– and the greatest 3B of all-time (arguably)- my point is that in the present we all think that our guys aren’t as good as the glory days– the comment about howard showing up in post season is ridiculous! he struck out against the giants– thats the game…
right now you could argue that the phils have their best ss, 2nd base, 1B and catcher of all time– baseball seasons are marathons and baseball careers are a series of marathons– that core….man just watch them and enjoy!
DD i remember you bashing amaro and ibanez… amaro is the best gm in BB and ibanez has been a SOLID contributor on a very very good team- he’s not perfect but ask any expert and they would say he has been a valuable cog!