Michael Vick Is In Helmet And Practicing Again 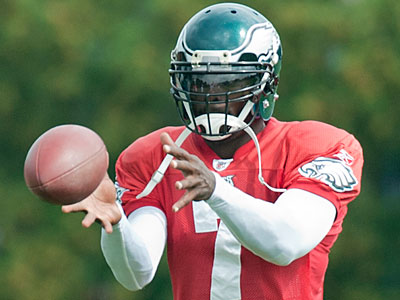 Eagles quarterback Michael Vick started out the practice at the Nova Care Complex in his helmet and practicing with the team. That’s another indication that he will be the Eagles starting quarterback on Sunday at Lincoln Financial Field. We’ll have another report after practice.

Former Eagles Pro Bowl wide receiver Irving Fryar is at practice day along with Seth Joyner, who will be the Eagles honorary captain for game on Sunday

For another day Osi Umenyiora and Mario Manningham aren’t participating in the Giants practice. There’s very little chance of either them playing on Sunday.

Giants defensive end Justin Tuck isn’t at today’s practice up at the Meadowlands, but according to Mike Garafolo, it’s a personal reason he’s not there. He’s healthy will be ready to go on Sunday.

My NFL Picks In Week Three

Vick: “There’s no reason to think I won’t play on Sunday”