Despite The Loss, Big Games For Vick, Jackson And Babin 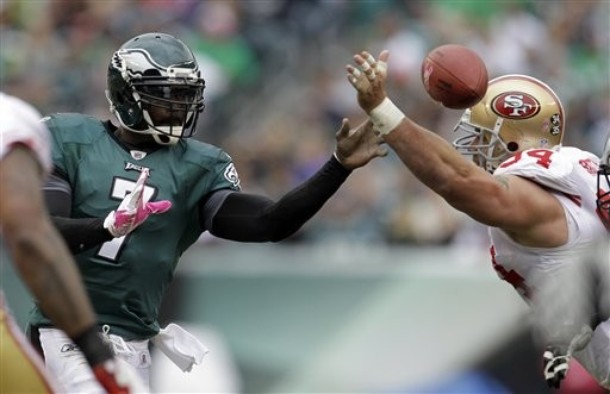 This was an awful loss which could lead to some major changes down the road for this football team. This team has some serious problems, but at the same time, their talent is undeniable. Michael Vick and DeSean Jackson had big games. Jason Babin had a big day with three-sacks.

The talent is one of the reasons that the decision to make so many changes in the coaching staff is bringing so much criticism on Andy Reid.

QB Michael Vick set career highs with 30 completions and 416 passing yards, while also contributing 75 rushing yards and two passing touchdowns. It was his sixth-career 300-yard game, and his fourth as an Eagle … According to Stats Inc., it was the most passing yards ever by a player with 75 or more rushing yards … His 416 yards were the seventh-highest total in team history and the most since Donovan McNabb’s 450 on 11/15/09 at San Diego … Vick (4,858) is now just 70 yards shy of Randall Cunningham (4,928) for the most rushing yards in NFL history by a quarterback.

Big Play DJ … WR DeSean Jackson led the team with 171 receiving yards, marking his 13th career 100-yard game (second this season) and tying Ben Hawkins and Harold Jackson for the seventh-highest total in team history (including postseason) … It was the third-highest yardage output of his career.

Babin Breaks Out … DE Jason Babin had a career-high three sacks, marking his second multi-sack game of the season and the eighth of his career. It is the first time in his career that he has had a sack in four straight games, and he now has 10.5 sacks in his last eight contests, including three multi-sack efforts … The last Eagle three-or-more sacks in a game was Trent Cole, who notched 3.5 on 9/23/07 vs. Detroit … Babin’s 7.0 sacks this season are the most ever by an Eagle through four games.

King Size Block … T King Dunlap blocked a 45-yard David Akers field goal attempt, which was recovered by Colt Anderson and led to an Eagles field goal. It was the first blocked kick by an Eagle since Antonio Dixon’s block of a 48-yard attempt by Robbie Gould on 11/22/09 at Chicago.

Offensive Quick Hits … TE Clay Harbor caught his second-career touchdown … RB LeSean McCoy had six receptions for 34 yards and his second receiving touchdown of the season. McCoy has scored a touchdown in all four games this season … The Eagles offense netted 513 yards of total offense, which is the sixth-highest total ever under Andy Reid.

The Eagles Must Get Bigger On Goalline And Short Yardage