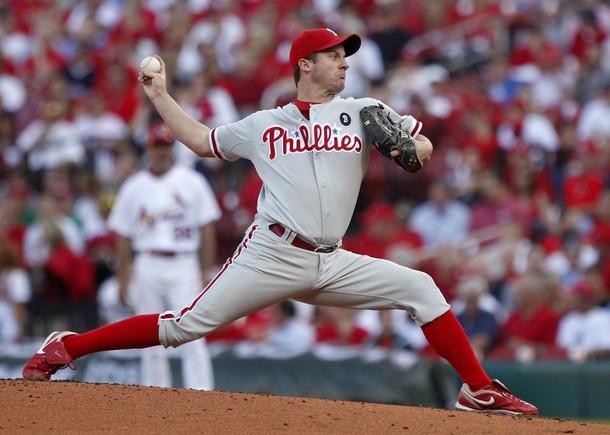 For the first time in the five-year playoff run that the Phillies have been on, a series has been pushed to a decisive final game. The Phillies dropped Game 4 in a disappointing fashion on Thursday night, going down 5-3.

Early on, it looked like the Phillies might be on their way to ending the series in four games. The offense that didn’t produce a single run from their starting lineup in Game 3 got off to a fast start.

Jimmy Rollins led off the game with a shot to centerfield. Centerfielder John Jay didn’t see the ball well because of the blinding sunlight in the outfield, and the ball bounced up into the grass for a ground-rule double. Chase Utley followed Rollins with an RBI triple down the first base line. It was the third extra-base hit of the series for the second baseman. Hunter Pence then drove in Utley with an RBI single, giving the Phillies a quick 2-0 lead.

However, the Phillies would once again be disappointed by their starting pitcher. Roy Oswalt came up with a disappointing effort, allowing five runs in six innings of work. After the Phillies gave him a two-run lead, he immediately gave the Cardinals back a run in the bottom of the first inning, giving up an RBI double to Lance Berkman. Then in the fourth inning, the veteran righthander was burned by St. Louis third baseman David Freese for a two-run double to lose the lead.

Freese got to Oswalt again in the sixth inning, delivering a crushing two-run homerun to dead centerfield that gave the Cardinals a commanding 5-0 lead.

While Oswalt’s effort was poor, the effort of the offense was even worse. The bats simply closed up shop after the first inning. They managed to score another run in the eighth inning, but they needed the help of a balk and a wild pitch to do so. After collecting three hits off of Edwin Jackson in the first inning, the Phillies managed just four hits the rest of the night, including just one hit from the four through eight holes.

Slugger Ryan Howard was nowhere to be found in this game. He went 0-4 with three strikeouts, and left three runners on base. The first baseman has already played a critical role in the series with his homerun in Game 1, but its not enough for him to show up for one game.

With the exceptions of Jimmy Rollins and Chase Utley (batting .563 and .462 respectively in the series, and supplying four of the seven hits tonight), the lineup has been flat for three games now. They’ll have to pull it together quickly, or this will go down as one of the most disappointing seasons in franchise history.

The Phillies now face a do or die situation on Friday night, when Roy Halladay will take the hill for Game 5 against Cardinal ace Chris Carpenter.

Player Of The Game: David Freese

The Cardinal third baseman came through with two huge at-bats for his team, a two-run double in the fourth inning to give St. Louis the lead, and a two-run homer in the sixth inning to create an insurmountable lead. Both hits came off of Phillies starter Roy Oswalt. Freese stepped up tonight, and his efforts are a big reason why there’s going to be a Game 5 in this series.

The better all around team won tonight in the CArdinals who have been playing playoff baseball for the last 4-5 Weeks just to make the Playoffs.. Phills had terrible at bats when the had base-runners on (Rollins,Pence and Howard in particular) , Charlie stayed with Oswalt 1 Inning too long but since thge Phils Bullpen has been shaky of late, he stayed with Oswalt .. Utley mades a poor base-running decision to go to 3rd Base on that infield ball hit by Pence..
The Cards led the NL in Hitting as is evident as them getting contributions up and down their line-up.. John Jay and Ryan Theriot have been a real thorn in the Phillies sise and if it was not for Ben Francisco unexpected 3 Run PH Homnerun yesterday, The Cards would be moving on… I expect the Cards to win in Game 5 in another 4-2/ 5-3 type of game.. Phils have been outhit big time in games 2,3,4 and they have a more balanced line-up, a better bullpen and to be honest, a better manager who uses his complete roster .
The Cards have been the hottest team in Baseball since Sept 1 and have played meaningful games ever since while the Phils have been on cruise control.. Now that the pressure and intensity picks-up it appears it’s the Phils who are lacking the energy and are tight and the sound fundamental baseball that you expect a Champion to have…And to think the Phils couldn’t beat the Cardinals #4 Pitcher is also a big disappointment .. Who cares what a team did in June or July , it’s about he here and the now and right now, the Cardinals are out-hitting, out-pitching and out-managing the Phils which is very similar to what the SF Giants did to the Phils last year too.. It appears is another bad week to be Philadephia Sports fan..

Everyone in the Delaware Valley knew the game was over after the 1st inning. I was shocked they scored another run. Once they scored the 2 runs, be honest, you knew they were done. This has been there pattern for forever. You wanna shake things up, think outside the box? When its late in the game and there is a lefthander in the game. Pinch hit Mayberry for Howard. I cannot believe that Howard batting against a lefthander is better odds than Mayberry batting against one. I know I will be bashed and I know it will never happen Im just saying.

Not mad at you Paul just an upset Philadelphia fan who ain’t blind.

LOL Paulman the truth hurts. We all watch the same game. Can we win on Friday of course. Are the Cards a better team right now than the Phils, sure are. Paulman is right the series should be over. We had no business to win game 3. They have been better in every area for the last month. We only have 1 advantage over the Cards. The great equalizer and he pitches Friday. Halladay.

Lets all hope the bats will be better than of late and better than last years post season. Otherwise, well, I choose not to think of otherwise… Let’s get those bats hot Phills!

The Phillies will win Game Five. We will make Friday night a (Holiday). I know we haven’t played our best baseball in St Louis, but things will get better at home. With Holiday pitching there is no way we are losing game five. All we need is some timely hitting and we must stay focus. I feel Howard will bounce back at home and play a key role in helping us win game five. Phis 7 Cards 2 book it!!!!!!!!!

Big changes are needed in the off season!!! The entire infield & BP needs to be revamped!!

It better be the Halladay Pitcher we saw in April,May & June, for he has not been the same Pitcher since mid-summer in my opinion… I am picking Cards 4-2 over the Phils as the Batting struggles against a rested Chris Carpenter and the Phils have not figured out this Cardinal Bullpen at all…

Well one thing for sure

The pressure on the Phillies will be tremendous

Phillies will trail 3-2 going into the 9th…Motte is in for the Cards… Victorino leads off with a single… Ruiz pops out, Gload pinch hits and singles….Rollins hits the 2nd pitch from Motte into the right field seats to win it.

Rollins is going to have an MVP like post-season… of course, because his contract expires end of season.

Every first round should be a nice tune up and test for the pennant.Rhino is just missing and hasnt come up like we want but the rest of the crew have done enough. Dont forget Rhino basically won game one for us.

Paul…just like you picked the Braves to win the division. Go beat sand sonion.

Nice one Jott1972.. and that would be awesome if that occurs..
My call on the Braves was made back in Febuary and yes I was wrong about them..

But on how this Series ends, I have a different take..

Cards CF John Jay hits 2 Run Homer off Halladay in the 8th to put the Cards up 4-2, but the Phitin’ Phils battle back and in the bottom of the 8th
,they load the bases up with Carlos Ruiz and only 1 out, Ruiz hits a shot right back to the Pitcher who throws home and then to 1st base for an inning ending double play…
Then in the Bottom of the 9th, Phils load the bases again and the Cards bring in 41 Year old Left-Hand PItcher Arthur Rhodes to strike out Ryan Howard for the final out of the game and the Phils Season and dominance in the NL East officially comes to end…

Phils in 2012 go back to their old ways of watching their $$$ and they release and or not offer contracts to Lidge, Oswalt,Francisco, Ibanez, Rollins,Gload, Scneider, Kendrick and replace these players with younger players from their Farm Team as they begin to pave way for Charlie’s final season as Manager before announcing Ryan Sandberg as the next Manager for the 2013 Season..

My analysis of Game #5 is uncomplicated…The Phillies need to hit and score runs…One or two runs will not get it done, and in any case, this puts too much pressure on your pitcher to be perfect…If the Phils score some runs for Halliday, then on to the NLCS…If not, they go home, and break all of our hearts…They also need to get their defensive positioning straightened out a bit, as the Cards have hit a bunch of ‘gappers’ in this series…It’s not like they have been pounding Phillies’ pitching…All quite simple, and we will see come Friday night..