Flyers Won’t Be Able To Coast Through The Atlantic Division 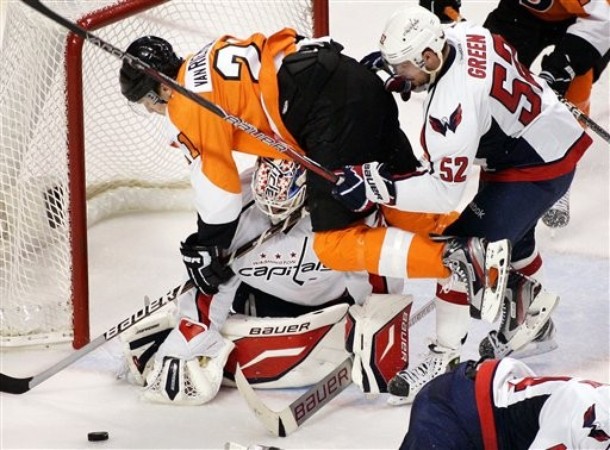 Let’s be real here. They were not going to go 81-0-1 to finish out the year. The Flyers first regulation loss on the season Thursday night came off the heels of an effortless 60 minutes of hockey. While it is always frustrating to see a team register its first loss of the season, it was how they lost which made it concerning.

The Flyers were pinned in their own end for the better part of 40 minutes, and while Washington up to this point is the best team in hockey, the Flyers had no jump or energy for a team that is considered a conference rival. If you cannot get energized for a game against the Capitals, how are you going to get energized for division rivals? How will they fare against the much-improved Eastern Conference?

Simply put, the Flyers will have a rough time winning the Atlantic Division again this season. Regardless of how the Flyers played the other night, three weeks into the season has shown that there is less of a disparity between the elite and rebuilding teams.

In the Atlantic Division, no team has allowed more goals than favored or has lost more than two games in regulation. Yes it is early, but it shows that all the teams have become better defensively, which can lead to problems for an offensive team like the Flyers. If you don’t score goals, you don’t win games.

With the defensive problems the Flyers have had over the past three games, tight-checking divisional matchups may come down to Ilya Bryzgalov, who has had a so-so start. If the Flyers are going to have any chance to win the Atlantic, Bryzgalov needs to settle down and become more consistent.

As far back as I can remember, it’s been quite a few years since the Atlantic Division has been tough. Even with all the moves the Flyers have made, it has not separated them from any team at all.

While their record may not show it, by far the most dangerous team for the Flyers chances is the Rangers. Once

Brad Richards and Marian Gaborik create some chemistry, they will become a nightmare for other teams. With secondary scorers such as captain Ryan Callahan, Brandon Dubinsky, Artem Anisimov, and blue-line threat Ryan McDonagh, the Rangers will be the team that could most likely challenge for tops in the Atlantic.

What makes matters worse, their best defenseman Marc Staal is injured. Once he returns, it only bolsters a lineup that is backed up by Henrik Lundqvist, who is arguably the hardest goalie to score on in the NHL.

Behind the Rangers, the other consistent threat is the Penguins, who currently lead the division. The Penguins are averaging almost three goals a game, and that is without Sidney Crosby. They have scored the most goals in the Eastern Conference, and the only flaw they have is that their defense has been almost as suspect as the Flyers.

Marc-Andre Fleury, while allowing only 14 goals, has been peppered with 180 shots against through six games. That is a high amount of shots for a team that has changed to a more defensive-mindset, not to mention two of their best defenseman in Paul Martin and Zybnek Michalek are a combined minus-9. Pittsburgh will have to rely on Fleury and outscoring other teams to continue winning. Regardless when Sidney Crosby returns, the Flyers will have to continue to be aware of the Penguins high-powered offense.

The Devils and Islanders will both surprise a lot of people this season. Both teams, although thin on the blue-line, have added some scoring punch from within. Zac Parise has returned from his injury-plagued 2010 season for the Devils, and Jon Tavares is starting to shine on the Isle. Both teams have gotten strong goaltending as well. Martin Brodeur is currently injured, and when he has played, it’s been unimpressive. Johan Hedberg has been the reason the Devils have gotten seven points in the four games he has played. It’s crazy to think, but Martin Brodeur will have to battle for the starting job once he returns.

The Islanders arguably have the best goaltending in the Atlantic. Al Montoya is starting to show why he was selected 6th overall in the 2004 draft, and with backups in Evgeni Nabokov and Rick DiPietro, the Islanders depth alone in goaltending will allow them to become even more competitive in the Atlantic Division. For the first time in years, they do not have to rely on one goaltender to carry them.

It seems like the Atlantic Division will be the toughest as it’s been since the 2007-2008 season. While it is still early, the Flyers need to realize that they are no longer the team to beat in the division. With all the teams being more competitive and stronger than in years past, this season will be too tight to determine who will come out on top. It’s plausible that it will come down to a shootout on the final game of the season.

And it wouldn’t surprise me one bit if that team were in the Atlantic Division.

I’ll be back in a few days to explain why Ilya Bryzaglov is off to a so-so start, but is still worth every penny on his $51 million dollar contract.

No Rhythm Against Blues for Flyers