The Nittany Lions Must Put Together A Full Game 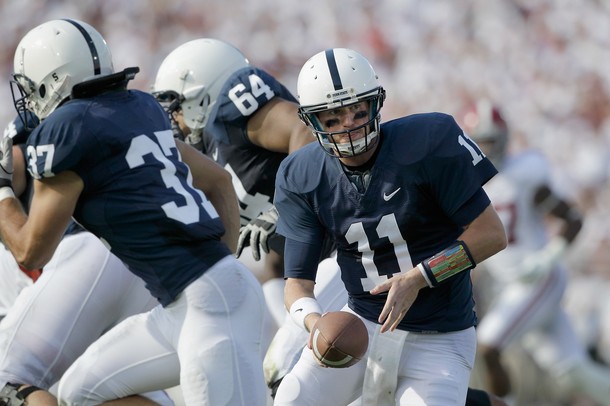 The NIttany Lions and head coach Joe Paterno walked off the field after Saturday’s Big Ten win at Northwestern 34-24 with smiles on their faces. With the win on Saturday, Paterno tied Eddie Robinson’s Division I all time victory mark with his 408th career coaching victory. The Nittany Lions also improved to 7-1 overall and 4-0 in the Big Ten.

Penn State led at halftime 27-24 after what was a sloppy and wide open first half. The offense had finally woken up but the defense was totally picked apart by Northwestern QB Dan Persa, a Bethlehem Liberty High School graduate, in the the first half. The game turned into a tale of two halves for Penn State.

I think Lions quarterback, Matt McGloin has given Paterno enough reason to make him the team’s number one quarterback after his performance against Northwestern, but that doesn’t mean the coach is going to do it. McGloin was 17 for 26 with 192 yards passing and two touchdown passes. There’s no question that the young signal caller had the offense moving and clicking in the first half.

Wide Receiver Devon Smith had six receptions for 110 yards and one touchdown on the day. The running attack was clicking as well, led by Silas Reed who had 18 carries for 164 yards ( a career high) and one touchdown. This was Reed’s fourth consecutive game with 100 plus yards.

On the defensive side of the ball, it was also a tale of two halves for Penn State. In the first half, they were taken apart by the Northwestern offense for a total of 281 yards. In the second half it was a complete different story. Penn State just allowed 125 total yards. The defense took total control of the game especially in the fourth quarter. They put a clamp down on the game. The defense finished the day with a total of seven sacks and linebacker Gerald Hodges finished the game with a career high in tackles.

The Nittany Lions return to the friendly surroundings of Beaver Stadium this Saturday against an Illinois team (6-2 overall, 2-2 Big Ten) who will be a very hungry football team after they are coming off a loss at Purdue on Saturday
21-14. Illinois is a Top 25 team and they are going to be ready for Penn State. The crowd at Beaver Stadium this week will be ready for Illinois as well and will present the them with the white out.

Penn State has to play a complete 60-minute game on both sides of the ball, if they want to beat Illinois this week. Head coach Joe Paterno also needs to name a number one quarterback as well and stick with him the remainder of the season. Against Illinois Penn State fans are going to find out what their team is made of or not made of. This week begins the final stretch of games when Penn State fans will all find out if this years Nittany Lions team is the real deal or not. Time will only tell.

Is Penn State for real? As far as I’m concerned, I don’t think so. They have not played the top Big Ten Schools. On the offensive side of the ball the team needs to be more consistent. They must have equal balance of the running game with the passing game. The defense has been totally carrying this Penn State team and that could be a problem. Don’t get me wrong here, defense does win you championships, but if your defense is on the field for long periods of time, it will cost them against the better teams in the conference.

Do We Have A Goaltender Controversy With Bryzgalov And Bobrovsky?

Realistic Expectations For The Rest Of The Eagles Season