Cole Returns And D-Line Take Their Game To Another Level 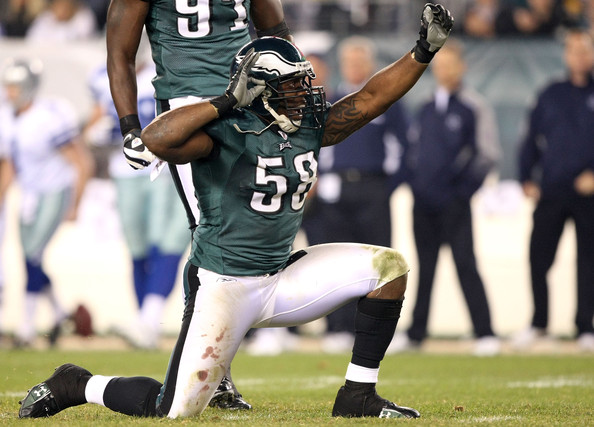 While the Eagles and their defensive line still allowed 8.5 yards/carry on defense, their enormous offensive output allowed that defensive line to focus on its best skill—rushing the passer. The defensive line, sparked by the return of pass-rush extraordinaire Trent Cole, had 4 sacks and countless quarterback pressures that disrupted the rhythm of Cowboy’s quarterback Tony Romo.

Returning from a calf injury, Trent Cole allowed the rest of the defensive line to be free of double teams. This was clearly evident from the first Dallas drive of the game as Jason Babin and Trevor Laws both had sacks that sent Dallas to a quick exit on offense after just 5 plays and 3 minutes on the field.

Cole even had a sack of his own in the 2nd quarter. Often times, Cole got solid pressure on Tony Romo and forced one of his many off-target throws. When Cole wasn’t able to get to the quarterback, someone else on the defensive line stepped up to pressure Romo. Cole’s biggest contribution was certainly the attention he garnered. While not having to face any double teams this game, Jason Babin recorded two sacks and had numerous quarterback pressures. Cullen Jenkins and Mike Patterson were able to generate pressure up the middle from the defensive tackle positions which forced Romo to often have to hurry throws—with little success.

On most of his throws, Romo was forced to move around in the pocket and it showed as he had one pass picked off by Nnamdi Asomugha, numerous underthrown passes, and completed only 51.4% of his passes. When an off-sides penalty on Cullen Jenkins is the worst play by the defensive line all game, you know they were clicking on all cylinders!
All in all, it was a very good effort by the defensive line and with Trent Cole back in the fold, look for him to continue getting nearly one sack in every game he plays and don’t be surprised if Babin challenges Reggie White’s single season record of 21 sacks. If he keeps up his current pace, Babin would finish with over 20 sacks. This defensive line could go down in history as one of the best in team, and NFL history.

Vick And McCoy Lead The Way With Flawless Performances

For Second Game In Row, Castillo Passes With Flying Colors

i hope your right Mike, I enjoyed the way the front for got consistent pressure on romo who like vick enjoys moving around in the pocket and taking off and running. But for the most part when he did try to escape the pocket the birds got to him… I now look forward to when they began incorporating Brandon Graham into this sack fest because i feel this wide9 technique caters to his type of play, and attacking DE…

Mike, come on, man! Best line in NFL history. It was one game, let’s not get carried away & ahead of ourselves, now! Let’s get to 500 first, then take it from there. The Cowgirls & Blowmo suck! I’m glad they are only using the wide 69, partially now. They were getting slaughtered on running downs. Best thing they could of did.

@Hart, Ahh I like that. Having Graham in the wings certainly helps as he probably is eager to get into the action on the Dline as well. And the Eagles don’t even need to rush him back, just give him a bit here and there to get him acclimated. If Graham can be the player he was in college (which he was a beast!), then this might be the GREATEST DLINE EVER IN NFL. ok ok, not really, but still they will be pretty good.

Amazing the change in ‘tone’ now the team is starting to get untracked and going in the right direction – Dcar is right – lets get to .500 next week and go from there – all the sudden that kool-aid starting to look a little tasty isn’t it –

Not drinking noooo kool aid! Just glad, after 5 games, Andy swallowed his ego & pride, & seems to be utilizing his team the way it should be. Not the square peg in the round hole theory. He’s running alot more, using play action more, & utilizing the middle of the to Celek & using the screen game more. All of which takes pressure off of a O-line that is a much better at run blocking outside than pass blocking. Also anyone notice no more idiotic, forced bombs down the field the last couple games. On DF, they scapped the full time use of the wide 69 BS, they have Asomugha & DRC playing bump & run, man to man, & have consistently have played Hansen with Allen & Coleman. All of the above in which I bitched about for 5 weeks, that they finally seem to have seen the light on. Hopefully Dip$#!t INC. keeps this going, because I love Shady. This kid stays healthy, he’s for real. BTW, anyone else want Asante the f^#@ out of here. I can’t stand the SOB waste.

GEez man – been saying all year it is a 16 game season 16 – we still got 9 left – everyone getting all disjointed before half the season goes by, wanting to fire people, cut people……….. chill out relax, watch the games and have fun –

wait – what’s that I hear – could it be —– the bandwagon… here it comes, look at all those people wanting to jump back on….

BWAHAHAHA!!! Never jumped off. Just want & still want Reids stupidity gone. Will always love & route for them. A few wins don’t change all of the mistakes, stupidity, & stubbornness of Reid! Maybe he’s changed, since his @$$ is on the line. Who knows? We’ll see. I doubt it.