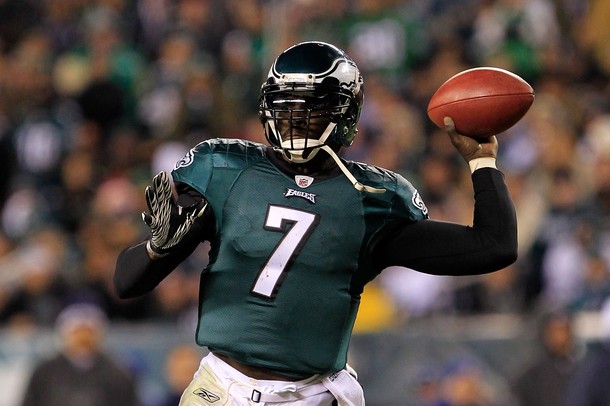 The Eagles finally put together a mistake free, complete game of football Sunday night, and the result was a much needed 34-7 thrashing of their most hated rivals. While LeSean McCoy was at the forefront of the attack with 185 rushing yards and two touchdowns, it was Michael Vick’s accuracy and efficiency in the red zone that allowed the

Eagles to cruise to their third win of the season. Vick finished the night 21-28 for 279 yards and two scores while adding another 50 yards on the ground. His stat line was blemish free as he didn’t commit a single turnover the entire night.

At the end of the first half I was surprised to see he was 13-17 passing because I couldn’t believe he actually threw four incompletions. Vick was throwing crisp laser beams to anyone he could find. He took advantage of the Cowboys game plan to take away the deep ball and utilized Brent Celek and Jason Avant over the middle for a combined 168 yards and a touchdown. He made all the right decisions and ended up with his best overall performance since the Monday Night game in Washington last year.

On the other side of the ball, the Eagles defense pressured Tony Romo and never gave the Dallas offense the opportunity to put anything together. Romo had his worst game of the season as he finished the night 18-35 for 203 yards that mostly came in garbage time. Take away one 70 yard pass to Laurent Robinson that resulted in the Cowboys only score, and Romo was totally shut down by the Eagles defense.

Perhaps he would have been more successful if he spent as much time and energy in figuring out the Eagles defense as he did arguing with the refs over a missed pass interference call against Nnamdi Asomugha that occurred during a point in the game when it didn’t matter anyway.

Where Vick was efficient in making plays (especially on third down), Romo looked out of sync most of the night. The Cowboys have just as many weapons as the Eagles on offense, but they never got anything going. Miles Austin and Dez Bryant were invisible until the meaningless fourth quarter, and the Eagles even exorcised their inability to stop tight ends by holding Jason Witten to a measly 28 yards.

what Tony Romo didn’t do. Maybe the Eagles defense is finally coming together and we are about to witness great things from a group that has been much maligned the entire season. Romo is still one of the better passers in the National Football League, but last night he looked rather pedestrian and when the scoreboard showed all zeros at the end of the fourth quarter it was Vick who had played the role of an elite quarterback.

Going forward, both these teams will have their work cut out for them if they want to make the playoffs. 3-4 is not an enviable record to have, but the Eagles played this game like they are ready to bury their horrid start. It all begins with the play of the quarterback, and Vick brought his “A” game to Dallas week. He was locked in from the first drive and by the time halftime was over, so was this game. If Vick can continue to build on this solid outing the Eagles should continue to soar.

A home game against the lowly Seahawks is sure to be quick fix for all that ails them, but at some point they are going to have to show they can win a big game. On Football Night in America, Vick showed he could come through in a must win game. Tony Romo didn’t. As a result, the Cowboys will yet again go back to the drawing board, while the Eagles suddenly have some promise in what was once thought to be a lost season.

No BS this morning! We beat a GOOD TEAM! So let’s give them credit for a absolute display of Dominance! Holding Whitten-Austin-DezB all under 30yrds is CRAZY! Nnamdi shut Dez DOWN until the “knew” the game was a wrap then he started catching balls! Our D-line (Off the hook), O-line (Great job) especially Peterson! And our offence “Is what it is” (EXPLOSIVE!)

In the 1st Q, maybe its part of their 15 play script, but they ran a lot of sprint rushes with McCoy, which allowed him to be at full speed as soon as he gets the ball. However, I am not sure if it was the play calling, or the execution of the front line that allowed McCoy to run wild.

Cautous optimism only if Reid understand the importance of the run game.

Too many things can go wrong when you’re passing 75% of the time and the opponent knows it.

Let’s see if Andy have really changed his implosive ways.

get the hell out of here songs you piece of dung – you repeatedly bashed the eagles and the Fo for drafting Kelce and Watkins – there are dozens of your stupid ass fireman comments and dozens of rhetorical – why did we draft/have this O line when we never run…………….

do we need to do another draft review of the last two years? Anybody, anybody ——-

Tony Blowmo, is, was, & always will be, a fraud. He is a bum. When he is on, & isn’t running to save his extinction, does anyone throw a more beautiful spiral, than Vick. He’s like a champion, precision, dart tosser. Shady is the Beast from the East!

darn…. i wish we still had kolbbbbuahahahahaha….. icant even say it with a str8 face.

Where is VinnieTheHater and Hatedog today? Not showing up to celebrate the victory? How come?

If they can stop Ware from wreaking havoc on the offense then skies the limit. Chicago is all about stopping Peppers. Peters and Todd are playing like All-Pros and the young guys are gonna keep getting better. Vick just makes it tough on teams that break the seal and get a a rusher bearing down. He toys with d-lineman now when he breaks the pocket. The throw of the game is when he waited for the backer to show his numbers and put it on the 4 to Celek.

Navy, I think I’m getting soft. Naaah! Still can’t stand Reid. But I can’t not route for them. So I’m my own worst enemy. Hopefully they win, but still make the necessary change in the off season.