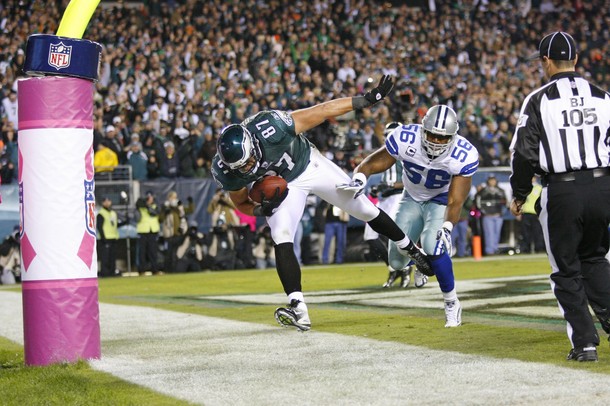 So far this season, the Eagles offense has presented itself in a Dr. Jekyll and Mr. Hyde fashion. We’ve seen the unit that went out Sunday night against Dallas and scored 34 unanswered points while not committing a single turnover, and we’ve also seen a group that gave the ball away 14 times over the course of a dreaded four-game losing streak.

The Buffalo game, in particular, saw the Eagles at their absolute sloppiest as they allowed the Bills to take the ball from them four times, which was the most turnovers the Eagles committed in a single game since 2008. After that 31-24 loss a little more than three weeks ago, the Birds have given the ball away only two times (one of those being a poorly thrown pick by an obviously rusty and overmatched backup quarterback Vince Young).

As expected, the offense has been much more successful, especially in the first half. Some of this can be attributed to running the ball more than usual. LeSean McCoy has rushed 58 times the last two games, a stunning number considering the Eagles ran the ball with him a total of 62 times during the four weeks from hell. Although Shady may hold the football like it’s a king sized loaf of Stroehmann’s bread, he rarely fumbles and hasn’t committed a turnover since Week 4 of the 2010 season.

His numbers continue to improve and more and more he looks like one of the top running backs in the entire league. Seriously, other than Adrian Peterson, is there any other back that you could definitely say you’d rather have than McCoy? The sky is the limit for this offense, as long as they continue to find ways to get him the ball. Of course Andy Reid would probably prefer ordering off the under 550 calories section of the Applebee’s menu than keep running the ball, but in order for this team to limit turnovers and keep playing at a high level, finding ways to give the ball to McCoy should be their top priority.

Another important aspect in sustaining success offensively is to limit the amount of interceptions thrown by Michael Vick. His diminutive stature will always leave him susceptible to tip passes which, in turn, could lead to more INT’s over the course of the season. Protecting him will help alleviate this somewhat, and as we’ve seen the last few weeks, the offensive line is playing better than they were earlier in the year.

Howard Mudd’s much maligned group held most of the Cowboys stellar defensive front in check for the majority of the game Sunday night. Other than DeMarcus Ware’s four sacks, the lineman for Dallas were nowhere to be found, giving Vick the opportunity to find the open man without having to rush the ball and risk throwing picks. The sudden emergence of rookies Jason Kelce and Danny Watkins, along with the solid play of Todd Herremans and Jason Peters has allowed the explosive quarterback to operate under less pressure. The extra time has made all the difference for Vick and it’s enabled him to limit the ill advised passes which, in turn, has led to much more success.

The Eagles offense has more weapons than just about any other team in the NFL. They can run the ball, throw it deep, and find ways to make plays underneath. In order for them to continue to do this successfully, they need to keep limiting the turnovers. The last two weeks has shown us what they are capable of when they aren’t giving the ball away.

We’ve seen this unit at its worst and lately we’ve seen it at its best. If they hope to catch the Giants in the NFC East and make their annual push towards the playoffs, the offense needs to play like the unit we’ve seen show up against Washington and Dallas. It’s not a complex formula to be successful. Run the ball to set up the pass, protect your quarterback, and limit mistakes. Do these three things, and there’s no reason to believe this offense can’t continue to play like one of the best in football.

Jason Avant Isn’t Willing To Apologize, But He Welcomes All Fans On Board