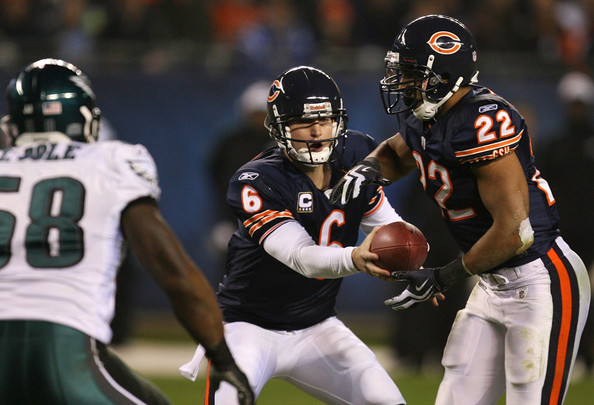 The Philadelphia Eagles’ Week 9 matchup against the Chicago Bears is one that could have a major impact on the NFC Playoff picture. The 3-4 Birds, coming off two straight victories, need a win to keep pace in the competitive, albeit mediocre, NFC East. The Bears, also winners of two in a row, bring a record of 4 wins and 3 losses to Lincoln Financial Field.

Although LeSean McCoy and the Eagles high-powered offense have received all the headlines, the other side of the ball has the more important matchup this week. The much-maligned Eagles defense has been much improved in the last two games and they will have their hands full on Monday night with Chicago’s streaky offensive attack. If the Eagles hope to beat the Monsters of the Midway, they need to take advantage of several key matchups.

Jim Washburn’s Wide-Nine Defense Line vs. Mike Martz’s Passing Offense
The first key to the game starts on the sidelines. Jim Washburn’s defense loves to rush the passer and Mike Martz really loves to throw the ball. These contrasting philosophies, coupled with a very shaky Chicago offensive line, provide a clear advantage for the Eagles. The defensive line must get pressure on the Bears mistake-prone quarterback, Jay Cutler.

In last year’s loss to Chicago, the Eagles allowed Cutler to sit back in the pocket and pick apart their secondary, throwing for four touchdowns. This year, led the Eagles defensive line has been much more effective led by Jason Babin’s nine sacks, the Birds have had success getting after the quarterback. If the pass rush can beat the Bears’ weak pass protection, which has allowed 21 sacks this year, the Eagles have a good shot at winning the game. If the Eagles’ premier defensive end, Trent Cole, can harass Jay Cutler, it will be a long day for Chicago.

DE Trent Cole vs. OT J’Marcus Webb
Cole, who is arguably the most important Eagles defender should be able to dominate Webb, when he’s left in one-on-one situations, which won’t likely be often. The Bears will give Webb help with their tight ends, fullback and halfback.

Cole has missed two games due to a calve injury. He comes into the game with fifteen tackles and four sacks, but is consistently the team’s most disruptive force.

Despite being almost constantly double-teamed, Cole allows his teammates to take advantage of one-on-one matchups through his tireless work ethic. Cole is an every down player who is a feared pass rusher and quality run stuffer, which the Eagles will need this week. Coming to the City of Brotherly Love is one of the most dangerous running backs in the game, Matt Forte.

DE Jason Babin vs. Gabe Carimi
As I said earlier, Babin enters the game with nine sacks. He’ll be matched up with massive rookie tackle, Carimi. Babin has a quickness advantage but like Cole on the other side, the Bears will be giving their tackle some help.

The big question will be how much Mike Martz helps his tackles. In the past, he’s been more enamored with getting five receivers out into the routes rather than protecting his quarterbacks.

If Cole and/or Babin are able to have a big game, they’ll be able to pressure Bears quarterback Jay Cutler into making mistakes and that could have a major impact on the game.

Middle LB Jamar Chaney and Weakside LB Brian Rolle vs. Running Back Matt Forte
Make no mistake, stopping Forte is the key to stopping the Bears offense. He’s their leading rusher and leading receiver. The Eagles’ nineteenth-ranked rushing defense must slow down Forte, so they can force Jay Cutler to put the ball in the air. Chicago’s top running back averages over five-yards per carry.

Since middle linebacker Cheney has replaced opening day starter Casey Matthews in the middle though, the defense has improved drastically. In the last two games, the Eagles have given up only 42 and 85 rushing yards, respectively, so something will have to give tonight. Another vital piece in the improvement of the run defense is rookie Brian Rolle, who was recently inserted into the starting lineup. His instincts for finding the football and ability to has been an important playmaker ever since.

With 38 receptions for 419 yards, Forte commands the attention of linebackers when he comes out of the backfield. Cheney and Rolle must do a good job shadowing number twenty-two and most importantly they must tackle well in the open field.

Forte is deceptively fast and he’s capable of making tacklers miss in the open field, plus he has the size and power to run through tackles. He is known for making the big play on runs or after catching the ball out of the backfield.

Eagles Secondary vs. Bears Receivers
In order to come away with a win on Monday night, the Eagles star-studded secondary must shut down the Bears’ wide outs. Chicago has four receivers, led by star punt returner Devin Hester and fellow speedster Johnny Knox, who have 19 and 21 receptions each. Hester and Knox combined for over 150 yards and one touchdown last year in their win against the Birds. Former Cowboy Roy Williams, whom the Eagles have seen plenty of over the years, is in his first season under Lovie Smith.

The Eagles have a huge advantage with Pro Bowl cornerbacks Asante Samuel, Nnamdi Asomugha, and Dominique Rodgers-Cromartie matched up against the Bears mediocre wide receivers. This group should be able to prevent any big plays made possible by Cutler’s big arm and Chicago’s speed on the outsides. The secondary, which has five interceptions the last two weeks, will have plenty of opportunities to create turnovers against the Bears up-and-down offense.

On the night the team honors former head coach Buddy Ryan, who was in charge of the most dominant defense in Eagles history, Juan Castillo’s group must take control of the game and lead the Birds back to a .500 record for the first time since Week 2.