The Eagles Have Reeled Us In For Another Week 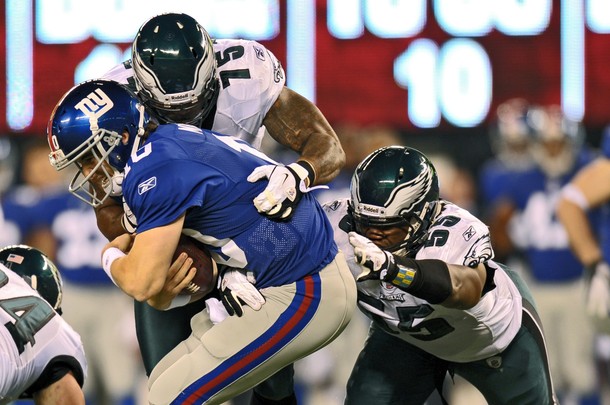 Going into Sunday night’s game, I told myself that I would not get excited or flip out at any point of the game. I was actually pretty calm for the first half.  By the third quarter that changed real quick. It really does not take much for me to get going. It started with the hitting.

I mean, Damn! Where in the world has this defense been? They were smacking the G-men right in the mouth and the G-men were not hitting back. They seemed to back down from the Birds. I can guarantee that D.J. Ware is taking a migraine pill right about now. I love that nastiness, which reminds me of the B-Dawk and Trotter days.

Enter the fourth quarter. I am thinking to myself there is no way in hell they will blow a fourth quarter lead again. Not happening. Well, all it took was about 2 minutes in then “Boom’. There goes the lead, tie ball game. I was like screw this I am going to bed every time a put effort into this team..

Something kept me on my couch though. I know why, because I am a complete Jackass when it comes to the Birds. That is why I stayed. Then here comes the “Drive”.  I know it’s not like Elway’s but you need something to cling to this season right? Enter VY (dream team himself) so here it comes, 3rd and 3 on their own 27 right after the G-men scored. Ronnie Brown runs for six yards. Man, the guy has been traded then has to come back because the trade is voided.

I know you guys don’t want me but “HI”. Then Riley Cooper with 18 yard catch on a 3rd and 10. Is this really happening? Mix in a insane catch by Jason “You fans are frauds” Avent. Thanks Jason. Then on 3rd and 3 from the G-men 42, Boom, Clay Harbor first down. Yes, boom and Clay Harbor in the same sentence. Then “Mister Elway himself’ (kidding), VY calls his own number on a 3rd and 1. First down!!!

Now I am thinking to myself we will at least get a field goal here? But on a 3rd and 4 from the G-men 20, D-Jax catches the ball a few yards away from the first down with a player zeroing in on him and he breaks the tackle for the first down. Yes, he broke a tackle. I am still impressed that he found the Defensive Coordinator on that 50 yard play to flip the ball too. Aww, the life styles of D-Jax. To finish it off VY finds “Bradley” Cooper in the back of the end zone. The “Drive”.

18 plays, 80 yards and nearly 9 minutes. Did the Eagles save their season the Meadowlands again? Always seems to be a trend for the Birds. This is how we all thought it would go down right? With all the big names in the off-season the Eagles brought in it was the little guys who stepped up Ronnie Brown, Vince Young, Harbor, Jason Avant, Riley Cooper and DeSean Jackson. Well, D-Jax is little though.

This game has given me another week to curse and flip out over Big Red’s playing calling, time management or whatever. I do enjoy that from time to time. I was on the brink of shutting it down for the season. My heart has been broken way too many times by this team. Like a sucker I always come back for more. So you guys got me for another week. Damn, Brady’s in town.