Close Up On Marshawn Lynch’s 15-Yard Run: Eagles “D” Quit On The Play 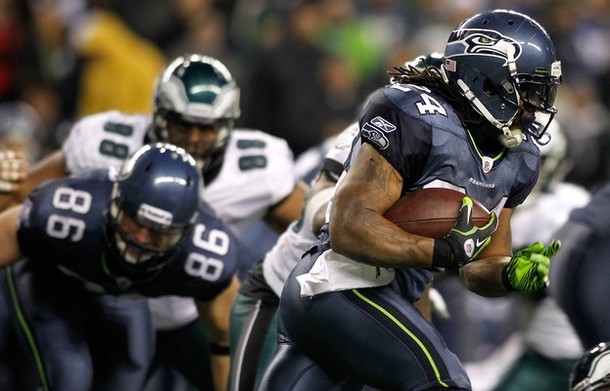 The game was scoreless and the Seahawks had the ball with a first and ten on the Eagles fifteen-yard line.  The Birds defense was stacked against the run with strong safety, Kurt Coleman sitting at only four yards depth with the linebackers.

The Eagles knew Seattle was going to run the football and the Seahawks didn’t care if they knew it.  They were lined up in an I formation with Marshawn Lynch at the halfback spot behind fullback Michael Robinson.  They ran lead play with Robinson leading into the hole.

The other linebackers were lined up at four yards depth behind the line, but Jordan was lined at two yards off of the line of scrimmage.  He was blitzing and obviously wanted to be close enough to the line of scrimmage to get to quarterback Tavaris Jackson before he threw the football, if he came free.

Eagles middle linebacker Jamar Chaney came from inside into the off tackle hole and met Robinson in the hole.  Chaney won that battle initially as he stoned Robinson in the hole with a forearm under his chin and against his throat.  You could see Robinson’s head snap back.

There was no hole for Lynch to run through on the front (right) side of the play, so he took a couple of steps to his right and looked on the backside (left) for a crack of some sort.  There wasn’t much there because the Birds defensive line had done a fairly good job at the point of attack at the start

Lynch was grabbed by Chaney who was still being pushed in the back by Robinson eventhough, he, Chaney had won the collision.

Seahawks tight end Zach Miller had been stood up initially by Eagles left end Jason Babin on the play but he stayed on him eventhough it started out as a stalemate.  When Babin tried to spin to come inside, Miller pushed him into the next county.

Coleman had come up to the line of scrimmage and stopped any chance of Lynch getting any yardage on the front side of the play.  As the play went on he had no idea where Lynch was in the middle of the scrum.

Babin could have brought Lynch down after Chaney had a shot at him, but he had done a spin to get away from Miller’s block and Lynch ran into his back at that exact moment.  As good as Babin is as a pass rusher, he’s just as bad as a run stuffer.  There’s a reason that most of the opposing team choose to run at him.

Not one of Seattle’s blockers stopped blocking eventhough the play seemed to be over.  They obviously know that Lynch is always capable of coming out of a pile.  After the initial collisions, the play seemed to be won by the Eagles, but the Birds players relaxed at the moment because it seemed that the play was over.

Seahawks center Max Unger and right guard Paul McQuistan double-teamed Eagles defensive tackle Mike Patterson and he never had any chance of making the play.  He on the ground as Lynch fought for more yardage and that freed up Unger to go looking for other Eagles to block.  The center pushed Chaney off the tackle as he tried to take Lynch down.

Big Robert Gallery got a piece of undersized linebacker Brian Rolle and knocked him to the ground.  Rolle tripped up safety Nate Allen who came up to the front side of the play while Lynch went to the backside.  Rolle is too good of an athlete to let a big 340 pound guard block him in open space.

Instead of taking anything for granted about the play being over, the Seahawk offensive linemen continued to push.  Wherever they saw an Eagles player they pushed on him.  Seahawks right tackle Giacomini blocked Jordan from one side of the play to the other.  He was so dominant in his block of Jordan that he cut off Eagles defensive tackle Cullen Jenkins who had gone upfield and was trying to pursue the play.

Seattle left tackle Russell Okung had his grips on Eagles right end Trent Cole but number 58 broke free and pursued the play.  As Cole approached the pile and looked for the ball carrier, Okung was still on his trail and blocking him.   When Cole relaxed while looking for the running back, Okung knocked him past the play as Lynch was coming out of the pile.

At the end of the play, Lynch was still on his feet as Eagles players looked to see who had made the tackle.  Nobody had made it, and Lynch was on his way to the end zone with cornerback Nmandi Asomugha being blocked to the ground.

This play should be used to convince an offensive line to keep blocking your man until you hear the whistle, regardless of whether it looks like the runner has been tackled or not. This was a classic case of one team quitting while another team continued to play hard.

The NFL Network’s Mike Mayock said a couple of times after the play, that Seahawks head coach Pete Carroll had told his line to “keep on plugging and keep on banging”.  They did just that on a remarkable touchdown run.

Video: DeSean Jackson Not Happy With Questions So He Ends Interview