Eagles Must Stop The Run & Make The “Sanchize”Beat Them 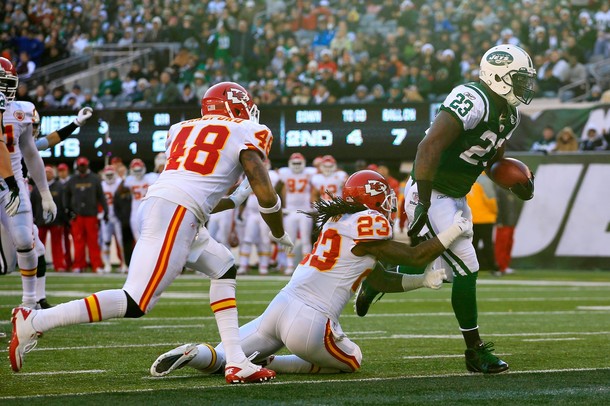 Despite an 8-5 record and holding the final wild card spot in the AFC, the New York Jets will bring an unremarkable offense to Lincoln Financial Field on Sunday.  Averaging 206.1 passing yards per game

with 21 touchdowns and 11 interceptions in addition to 104.9 rushing yards per game and 13 touchdowns, the Jets offense is ranked 21st in the NFL in passing and 22nd in rushing.

Historically, the Jets have been a team that has relied on the run to set up the pass, but the dominance they once experienced on the ground has been lacking this year.  This is notwithstanding the fact that their leading rusher, Shonn Greene has already eclipsed his total rushing yards in a season and we are only entering week 15.

Greene, who set the University of Iowa record with 1,850 yards in his senior campaign, has benefited from the persistent rushing attack employed by the Jets, already compiling 22 more carriers than he had in any of his previous seasons.  Persistence, however, does not necessarily equal success (just ask the LeSean McCoy who rushed 27 times for 38 yards last week), as Greene only has 6 touchdowns on the season.

At quarterback, Mark Sanchez is not someone on whom the Jets prefer to rely to win them games.  Rather, their strategy has been to try and pound the ball to open up the passing attack in order to make things slightly easier on the 3rd year pro out of USC.   That, combined with the fact that many of the routes are short or intermediate, explains why even though Sanchez is averaging 32 pass attempts per game, he is averaging only 6.7 yards per attempt, which has contributed to his pedestrian quarterback rating of 83.1 thus far.  New York lacks a great deal of speed at the receiver position, where neither Santonio Holmes nor Plaxico Burress are significant downfield threats.

The Eagles defense has been far from consistent this year, but they have certainly stepped up at times.  Philadelphia’s 12th ranked passing defense is allowing an average of 218.9 yards per game and has allowed 23 touchdowns while intercepting 12 passes.  Their much maligned rushing defense has shined at times and been hideous at others, resulting in them allowing 115.1 rushing yards per game, putting them 18th league-wide.  At this point, it is really just a crap shoot as to which Eagles defense is going to show up.  Is it the one that dominated the Cowboys and Dolphins, or will it be the group that was decimated by New England a host of others?

It is going to take an all out effort by an undersized Eagles defense to control the line of scrimmage and subsequently nullify a bruising Jets running game.  The New York rushing attack is one that utilizes a strong offensive line and tries to get their backs running downhill directly at defenders.  Due to their smaller stature, the Eagles defense has, at times, been known to have problems going against stronger, north and south style rushing opponents.  If the linebackers are not able to shed the blocks of the opposition’s offensive line, a downhill running game can be a daunting task.  The wide 9 technique forces the defensive ends to come off of the ball at a wide angle in order to get to the quarterback quickly and relies upon linebackers to fill the inside gaps.  If those linebackers are unable to fill the gaps, the opponent can hit the opening and quickly end up in the defense’s second level for a significant gain.

Philly needs to focus on stopping the relentless Jets running attack and put them into 2nd and 3rd down and long situations.  In those circumstances, the pressure is put squarely on the shoulders of a quarterback that has yet to prove himself as a “game-changer” in the NFL.  Getting pressure early and often on Sanchez has been proven to rattle him and force him to rush his progressions.  This will allow an effective Eagles rush to tee off with their heads down and focus on the pass rush, which, when they’ve been play well, has been the bread and butter of this group.  By pressuring an already shaky Sanchez, the Eagles defense can force him to make mistakes.

At that point, it is simply a matter of the defense taking advantage of those mistakes and turning them into points.  If the Philadelphia defense can force the Jets quarterback to make poor decisions and capitalize, it will put New York in a hole, forcing them to abandon the running attack and to put the ball in the hands of Sanchez.  No matter how poorly they have played at times this year, the Eagles defense should be able to control a pass-heavy Jets attack

The Jets are not as efficient running th eball to a couple of injuries and departures from their O/Line ..
All-Pro Center N Mangold missed a lot of action the 1st half of the Season and is just rounding into game shape
They lost starter D Woody to free-agnecy and have a new RT this Season
I expect the Jets to come out and pass early and often and try to catch the Eagles napping a little bit on pass-coverage and try to hit a couple of big plays to WR’s Holmes and Burress who has enjoyed big games playing at the LInc….I believe the Jets will do the opposite of what many think and that’s playing pretty open in the 1st Half and attempt to jump out on the Eagles since most Coaches (Rex Ryan) know that if you jump on Eagles early, you take the crowd out of the game and then the crowd will soon turn on their own team making an Eagle comeback very unlikely..and then when the Eagles are down and disgruntled, then the Jets pound the Rock in the 2nd half wearing down a weary team

Its time for the Birds to do their talking on the field. We haven’t play with any intensity or fire at Home. We need to show up at home and take care of the Jets. Even though we probably won’t make the playoffs this this about pride and respect. This team needs to prove something to the fans. If you claim you have Reid’s back then win some games and if you don’t shut the F–K Up!!!!!!

Navy, see you mentioned the great Ronald Reagan, your a republican!!! I’m sorry…i was never sure why u were reluctant to get rid of reid, but i know now you are just a narrowminded live of the govt. military guy

also – on the political party thing – registered liberatarian – fiscally conservative, socially moderate – find me a democrat that believes in smaller government, lower taxes and a balaced budget – I’d vote for him (see results oriented – don’t have to follow a label)

but isn’t it funny you were totally wrong about me and you called me narrow minded! Cheers!

Ronald Reagan is loved by conservatives and was loved by big business throughout his presidency and there’s a reason for it. When Reagan came into office in January of 1981, the top tax rate was 70%, but when he left office in 1989 the top tax rate was down to only 28%. As Reagan gave the breaks to all his rich friends, there was a lack of revenue coming into the federal government. In order to bring money back into the government, Reagan was forced to raise taxes eleven times throughout his time in office. One example was when he signed into law the Tax Equity and Fiscal Responsibility Act of 1982. Reagan raised taxes seven of the eight years he was in office and the tax increases were felt hardest by the lower and middle class.

As Reagan cut taxes for the wealthy, the government was left with less money to spend. When Reagan came into office the national debt was $900 billion, by the time he left the national debt had tripled to $2.8 trillion.

In 1986, a group of Americans were being held hostage by a terrorist group with ties to Iran. In an attempt to free the hostages, Ronald Reagan secretly sold arms and money to Iran. Much of the money that was received from the trade went to fund the Nicaragua Contra rebels who were in a war with the Sandinista government of Nicaragua. When the scandal broke in the Untied States it became the biggest story in the country, Reagan tried to down play what happened, but never fully recovered.

The attacks on 9/11 by al-Qaeda and Osama Bin Laden brought new attention to international terrorism. All of a sudden, Americans coast to coast wore their American flag pins, ate their freedom fries and couldn’t wait to go to war with anyone who looked like a Muslim. What Americans didn’t realize was that the same group that attacked the United States on 9/11 was funded by Ronald Reagan in the 1980s. Prepping for a possible war with the Soviet Union, Ronald Reagan spent billions of dollars funding the Islamist mujahidin Freedom Fighters in Afghanistan. With billions of American dollars, weapons and training coming their way, the Taliban and Osama Bin Laden took everything they were given and gave it back to the United States over a decade later in the worst possible way imaginable.

5. Unemployment issues –
When Ronald Reagan came into office 1981, unemployment was at 7.5%. After Reagan cut taxes for the wealthy, he began raising taxes on the middle and lower class. Corporations started to ship more jobs out of the United States while hiring cheap foreign labor in order to make a bigger profit. While corporations made billions, Americans across the country lost their jobs. As 1982 came to a close, unemployment was nearly 11%. Unemployment began to drop as the years went on, but the jobs that were created were low paying and barely helped people make ends meet. The middle and lower class had their wages nearly frozen as the top earners saw dramatic increases in salary.

some non football info for people who want Reagan on Mount Rushmore…Actually Navy, i am conservative, religious, and from a military family, just want to get u going, i will vote for the worst guy just cause he is against abortion!!! hope u don’t watch fox news though,too much hippocracy.

i did expect atleast 1 vulgar word, good job,, i like every one here now, maybe even Shiller

Back to football, since i respect everyone opinion on here….Who do u think are the Eagles top ten best players..i am curious what u guys come up with

this should be a very interesting game ! there will probably be 15 to 25 % jets fans , if not more . if things turn sour the fire andy chants will begin . if the birds fall behind this could get ugly.

Tonto – feeling the Xmas spirit – son just got home from college, put the tree up last night – big Xmas party tonight, excited for the eagles to wup up on Jets – Dallas anf NYG lose to keep us going one more week……..

I think I saw Bill Bergey was going to be honorary captain? Any chance he could suit up?

All this emphasis on the D this year is misplaced

100% correct rcp the defense has been the scapegoat, and the shutdown corners of the jets will force Vick to run, more bad decisions, this one could get ugly, but eagles win in a close one

Eagles best shot is to exploit the middle of the Field versus this Jets Defense,,
Jets lost starting Safety Jim Leonard who makes the seondary calls and will be missed and is the real leasder of that Secondary group…
There will be some opportunites for the TE’s and intermediate Cross routes to be open in the middle of the field and also some deep routes where’s their CB’s will be left 1 on 1 … Eagles must attack this middle early and often which will make the CB’s play a little deeper and also have the LB’s play Deeper which could open some more running room for McCoy..