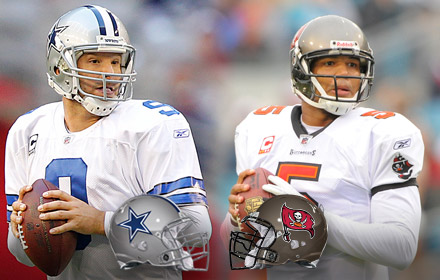 Many of this weekend’s games are extremely important in sorting out the playoff picture.  Eagles oc this week’s three game have playoff ramifications, including today’s game between the Cowboys and the Bucanneers.

The Cowboys have managed to lose the last two weeks, and they have done it in dramatic fashion. After missing a field goal at the end of regulation, the Cowboys lost in overtime to the Arizona Cardinals, then they found a way to blow a two score lead late in the fourth quarter to the New York Giants. Dallas received more bad news when they had to place their star running back Demarco Murray on Injured Reserve earlier this week.

I am not a fan of laying points with Dallas on the road. The Cowboys are just 2-8-2 to the spread as a road favorite over the last three seasons. Dallas has also failed to cover their last four dating back to the Washington game where they also failed to get the cover as a road favorite. The way the Cowboys have lost the last two weeks is alarming, and given their recent history with December struggles I quite frankly don’t trust them here.

Don’t get me wrong the Bucs are far from a good football team, but after being embarrassed last week against the woeful Jags, I believe Tampa will play with some emotion in a nationally televised game at home. If Tampa can run the football, I think they can stay close and maybe even win it in the fourth quarter. Take the Bucs getting seven at home.

The much maligned San Diego Chargers find themselves with a glimmer of hope to make the playoffs as they stand at 6-7. The Chargers have taken care of business the last two weeks by blowing out Jacksonville and Buffalo, and look to be back on track for their annual December stretch run. Since 2008 the Chargers are 12-2 straight up in the month of December, and 6-1 straight up in December when playing at home.

They will have a huge test as the 10-3 Ravens look to stay atop the AFC North.  The Ravens haven’t been all that impressive away from home. They lost outright to the Seahawks, Titans, and Jaguars on the road. I don’t trust the Ravens in this spot.

They’re being asked to lay points away from home, in prime time, on a Sunday Night, against a Chargers Team that looks to be playing really well. December has been a great month for the Bolts in recent years and I expect that to continue. Take San Diego as a home dog.

DETROIT at OAKLAND – THE PICK, OAKLAND +1

The Lions and Raiders have both struggled of late. Oakland has gotten their doors blown off the last two weeks on the road, while the Lions have posted a 3-5 record after their impressive 5-0 start. These are two teams that have also been snake bitten by the injury bug. Oakland has been playing without their starting quarterback Jason Campbell, and star tailback Darren McFadden.

The Lions have had more than their fair share of injuries to deal with as well. The Jahvid Best injury has slowed down their offense considerably. Since the injury the Lions offense has been held to under twenty points four times and has looked much more pedestrian of late. Matthew Stafford is being asked to do a lot rite now, and he has taken a pounding behind an offensive line that the Raiders should be able to take advantage of. You won’t confuse this Raiders defense with the ’85 Bears, but they can rush the passer very well.

They have sacked the quarterback thirty seven times this year which is good enough to be the fourth best in football. Oakland has been embarrassed on the road the last couple of weeks and returning home should do them some good. This is a big game for both football teams, but it’s a game the Raiders need. The Lions have given me very little reason to believe in them in a spot like this one. They barely beat a bad Vikings team at home, and were out gained by well over 100 yards. Take the Raiders to bounce back at home this week.

UPDATED: Finally, Some Good News for Flyers as Lilja Set to Return

I like the Panthers plus the points over the Texans whose offense is very limited with their 3rd QB (TJ Yates) no ndre Johnson and a banged up OL..
I think the Panthers win outright as the upset of the week…

Look like the Bucs have packed it in for the Hildays and this Season and Cowboys are having their way with them adns may end blowing them out of their own staduim.. Cowboys 36 – Bucs 10 ..

Steve Melzer IS A SHILL FOR THE BOOKMAKERS. His picks are 0% for lifetime! Check it! Tampa over Dallas?!? Even with 7 points? Or even 20? Really! Bet OPPOSITE Steve always…

Steve you must be the biggest loser better of all time. i can’t believe Garry even posts the things you write. You are quite possibly the worst handicapper ever.

Very very disturbing trend in the NFL been seeing it more and more. Teams that our out of it….no effort. Almost seems like if it isn’t a big divisional or primtime matchup…and the players give it a “ah whatever…” kind of effort.

And tems that have been eliminated? Flacs Jax last night was a joke, Dallas up 28-0 at half….Jets 37- Chiefs 10 (not even that close) Every Colts game this year….the Bills now….Lot of teams not even showing up.

Remember when getting a new coach meant a spike in effort? Not anymore.

Remember when a last place team used to rally against the top teams? Not anymore….anyone want to predict KC GB tomorrow? I think we could see 35-3 at half.

Damn I also went Bucs +7. If I had of seen this post earlier I would have gone Dallas. These tips are awesome. You just go against them and win every time!

The Overall play in the NFL is down and not only this Season, but in the past few years.. Does anyone remember so many players sitting out for a hamstring, turf toe, and such minor injuries week to week.. I know the Head Injuries are serious business and players need to be 100% healthy in mind to be able to play, but I have never seen so many players across the league sit out a game or 2 here and there for minr injuries.. It’s become a each man for his own type of league with the big plays, the big hits that make ESPN Hi-lights.. Players come and go (1/3 of all rosters change every Season, Coaches and Staff come and go every 2 years .. It’s becoming like Hockey and Basketabll where a 1/4 to a 1/3rd of the Teams go with a complete make-over in the Off-Season .. Teams that have the Stable Front Office with real Football people with quality Football Coaches and GM’s really have an advantage… A supportive Local Media and Fan Base helps too.. (Look at Green Bay,New England, NO Saints as perfect examples)

Anyone else winning with my Panthers plus the points at Texans..
I actually think the PAnthers win outright.. Texans Offense is hurting in the passing game and unlikley to score too many points..
I will call my the “Drunn Cold Paulman Picks” of the week..