Eagles “D” Must Stop Jets Running Game First, Then Take It To Sanchez 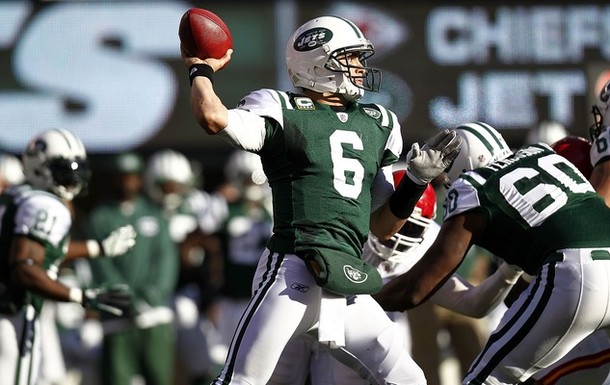 The Eagles defense is going to be seriously tested by the Mark Sanchez-led New York Jets offense.   The two things that this defense does poorly are the two that the Jets offense does best.  New York runs the football with a passion and they throw the football to the tight end often and effectively.

South Jersey native Shonn Green and LaDainian Tomlinson are the running backs that the Jets use with Greene getting the bulk of the carries.  He’s a between the tackles pounder who is thickly built with strong legs and tremendous intensity.  Greene has carried the ball 207 times for 868 yards which is a 4.2 yards per carry average.

Greene might not break off the long 40 or 50 yard run, but he wears you down with that big and physical offensive line in front of him.  If the Birds defensive front doesn’t show up with a seriousness about the desire to stop them, the Jets will run the ball down their throats.

Once the Jets get their running game going, they’ll start  calling some play action passes to speedy tight end Dustin Keller, who leads the team in receptions with 47 for 620 yards and four touchdowns. Keller and Sanchez have a tremendous chemistry and the quarterback gets in trouble he’ll start looking for number 81. is their big tight end that Sanchez looks to a lot when he is in trouble.

To stop the Jets running game,  I think the Eagles defense will need to stack the line of scrimmage early in the game and focus on stopping the run exclusively. Bringing more people into the box will put the corners on an island but with a suspect quarterback like Sanchez, Eagles defensive coordinator Juan Castillo should feel comfortable with one on one coverage outside.

Greene is a tough back to stop but if the Eagles play like they did against the Dolphins and everybody pursues to the football it should be a successful day.

They want to force Sanchez to beat them throwing the football.  It’s not that he can’t do the job, but he hasn’t be consistent especially when under pass rush pressure.  Many times when he is under pressure he panics and just throws the ball up which could give the Birds the opportunity to come down with some turnovers.

Wide receiver Santonio Holmes is the deep threat, who has the ability to make the big play.  He has a good feel for getting open versus zone or man-to-man coverages.  Although not very big, Holmes has shown the willing to come across the middle and make the big catch.  He has 43 catches for 564 yards but an impressive seven touchdowns.

Plaxico Burress lines up on the other side and of course he’s got the tremendous size and toughness.  Burress has 37 catches for 513 yards along with seven touchdowns.  When they get in the red zone, he becomes more of a target for Sanchez.

The Eagles will have their hands full on Sunday with this tough offense which has one of the better offensive lines in football.   The defensive line must take over the game like they did a week ago and they should be able to get the job done.

Cole and Jason Babin must win their battles and get to Sanchez once the stop that running game.  The Eagles offense could help the defense out tremendously be putting some points on the board early to make the Jets throw the ball more than they would like to.