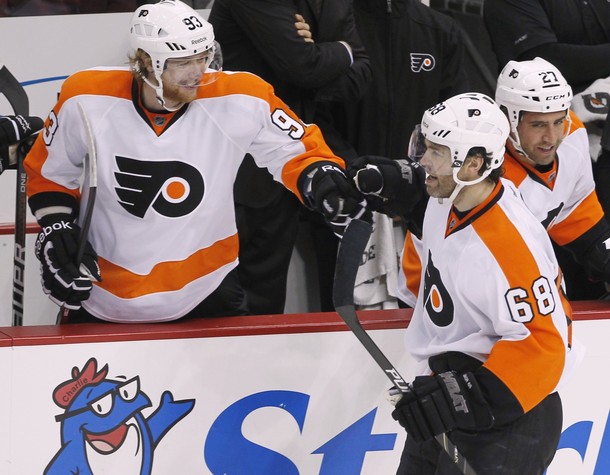 Peter Laviolette didn’t waste any time getting Jaromir Jagr and Max Talbot onto the ice at the CONSOL Energy Center.

A win against their archrivals was critical if the Flyers were going to build any momentum for Monday’s tilt at Citizens Bank Park, not mention steal two points from the Penguins.  The Flyers did not display their best effort of the season, but it was just good enough.

For the second time in as many starts, goaltender Sergei Bobrovsky let in a goal within the first minute of play.  Last time, it was Michael Ryder for the Dallas Stars.  This time around, it was Jordan Staal, capitalizing on bad passing between Andrej Meszaros and Matt Carle behind the net and Meszaros momentarily forgetting where he was.

The Flyers played sloppily throughout the period, perhaps nervous about what another loss would mean for the club.  Kimmo Timonen finally cleared the air with his first goal of the season on the powerplay.

Jagr, who was jeered loudly every time he touched the puck, grabbed the lead in the second period after weaving in front of two Pens defensemen and backhanding the puck over Marc-Andre Fleury.  Having been subjected to a ridiculous amount of overzealous hostility from Pittsburgh fans and media alike, watching him “salute” the ticketholders who were concurrently flipping him the bird was priceless.

Sean Couturier returned to the line-up after taking a shot to the head in the recent loss to the Boston Bruins.  He started the game on the fourth line with Harry Zolnierczyk and James Van Riemsdyk and was responsible for setting up the third goal for the orange and black.

Rushing down the ice, Couturier backhanded the puck across to Fleury’s pads. Matt Read, rather than jump off for a line change, skated to the slot and quickly collected the ensuing rebound for the goal. It was Read’s first goal in nine games and raised his tally to twelve for the season.

Speaking of JVR, his demotion to the fourth line did not result in much success. He finished the game with 9:36 of ice time, 2nd lowest behind Zolnierczyk. It’s not a good sign when the guy you signed to a $25.5 million extension is eating time previously reserved for Jody Shelley.

Tyler Kennedy cut the deficit to one with 6:29 remaining in the third period.  While Bobrovsky may have been able to stop the shot if he had kept his glove up, it was a fantastic shot from Kennedy.

In spite of mounting pressure from the Penguins in the waning minutes, Bobrovsky held the fort.  He ended the game with 24 saves on 26 shots, compared to 19 saves for “Flower.”

The Flyers finished with a pathetic 31% face-off success ratio. Couturier only won one of six attempts, but he has the excuse of being 19. Danny Briere and Talbot, who collectively won one of seven draws between them, do not.  It was an issue at the beginning of the year and remains an issue now.

With the win, Laviolette has a “tough” decision to make as far as who starts in net in the Winter Classic.  Ilya Bryzgalov is the team’s de facto starter, but Bobrovsky has played better over the last handful of games.

Will Sunday be the last time we see DeSean in Eagles Green?

Sixers Did What They Should Have Done To The Suns

What a fitting night for Jagr and Talbot. Jagr is a class-act all around. He really handles himself well. “I love Youuuuuuuuuuuuuuuu!!!!!!!!!!!!!!!!”

JVR has disappeared again and that’s bad news for our team. I want the new John LeClair out there kicking but..

Bob’s gotta start for the WC. I’d be pretty upset if we saw Breezy in there.