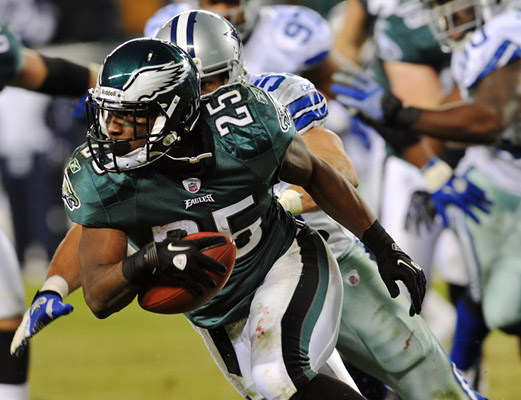 Philadelphia Eagles running back LeSean McCoy ended his record breaking season on the sidelines. After swelling in his ankle during the week’s practice, McCoy was unable to go in Sunday’s game. The game had no effect on this year’s playoffs but winning four straight to end the season could carry into next year.

McCoy set Eagles franchise records and had a season that will go down in Eagles history with the greats. With 1,309 yards, number 25 ran for the fifth most yards in the franchise’s storied history, just 203 yards behind Wilbert Montgomery’s 1,512 yards in 1979. The franchise record was in reach, too, with the Eagles offensive linemen looking for the rushing title as well. In the meaningless game, nothing else was at stake.

With the fourth most rushing yards in the NFL this season, McCoy has stood out as more than just the league’s fourth best running back. Arguably, he has stormed onto the scene as the league’s best. Following the week eight clinic he put on against the Cowboys, national media outlets started comparisons to one of the best backs in history, Barry Sanders. With the ability to stop in his tracks and make a cut, he could be considered one of the best in the league. But with that same ability and the ability to get to top speed in two strides, Shady is simply the best at making defenders miss.

With 20 touchdowns, he’s made a lot of those defenders miss for good as he took the ball the rest of the way to the endzone. Seventeen of those touchdowns came on the ground while three were receiving touchdowns. Those touchdowns led the league and were five more than the next closest scoring running back. His twenty scores were also the most on the team, including

Michael Vick who played in 13 games. Shady was also the Eagles leading scorer with 120 points, two more than Alex Henery scored during his memorable rookie season.

Over the course of the season, McCoy converted 102 first downs. That astonishing feat is more than some quarterbacks have done, including Philadelphia’s own, Kevin Kolb. Not even Tim Tebow could convert that many first downs during Tebow-Mania.

Without fumbling the ball a single time until week 15, McCoy finished with just one fumble on the entire season. One fumble in his 273 carries. Of all running backs with at least 250 carries, only four of them had just one fumble. The three others – Steven Jackson, Michael Bush, and Shonn Greene – all had less carries and yards than McCoy did. All three of those running backs also had other backs to share the carries with whereas McCoy carried the load for the Eagles running offense.

The Eagles offensive line with LeSean McCoy is a match made in heaven. The quicker offensive lineman fit Shady’s quick, cutback, speedy running style. With Howard Mudd’s return for next year up in the air, one cannot help but to question if McCoy will be able to be as productive as he did this season; a season he credits to his offensive line. With Jason Peters, Todd Herremans, and Evan Mathis under contract and Jason Kelce and Danny Watkins coming off their rookie seasons, it is likely to be the same starting cast that had such great success this season.

Hey Jeffrey Lurie, It Was Time For A Change But You Didn’t Do It

The Pain Of Being An Eagles Fan