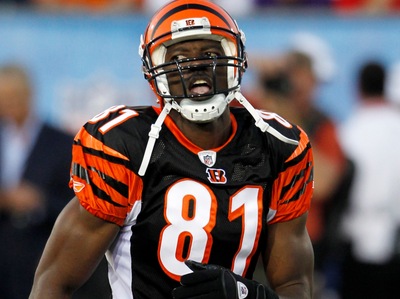 There are a lot of people talking about the Terrell Owens vs. Donovan McNabb controversy which erupted in 2005 after the Eagles lost the Super Bowl to New England.  Owens made some statements in an upcoming GQ article about Jeremiah Trotter talking him out of apologizing to McNabb.  Trotter has been on the radio today saying that Owens isn’t telling the truth.

There’s an article about the upcoming GQ article on Yahoo.com and it paints a very bad picture of Owens and his current predicament.

Arnold says that the upcoming GQ article describes Owens in a very depressed condition.  He said when people text T.O. and ask him how he’s doing, he texts back, “I’m in hell”.  According to the GQ article, Owens is broke, lonely and depressed.

Owens seems to pointing the finger at everybody but himself as the reason for his problems. If Owens had ever learned to keep his mouth shut and play ball, he would be on somebody’s roster right now and making at five to ten million dollars a year.  Instead he talked himself out of a job.  He can go hang out with Freddie Mitchell who did the same thing.

T.O. is mad at his agent Drew Rosenhaus for not warning him about a bad business investment.

Owens is also blaming the media for not giving him the chance to clean up his image.  He talks about not having any regrets about anything he’s done because that would be a slap in the face to his grandmother who raised him.

I think Terrell Owens needs to learn about the word “humility”.  Everybody makes mistakes but people who are consumed

with pride refuse to admit any of their mistakes.  Instead they always blame others and that’s the reason they never learn and always end up in the ditch.

“It’s official, it just went down, I’m headed back to Dallas,” Owens said in a promo video. “That’s right, IFL, here I come. Allen, Texas, here I come. I’m going to be me.”

That’s pathetic but that’s what you get when you can’t get along with anybody and you won’t take good advice.

Sixers Should Have Won It, But They Had No Answer For Andre Miller

As much as I want to feel sorry for T.O. I DO NOT, he’s getting everything he deserves.

A loud mouth malcontent says it’s everyone elses fault he’s out of a league starved for talent at his position. I feel absolutely no sympathy for a guy who was lucky to be blessed with a talent that did not require him to punch a clock for a living; actually made it to the league; and couldn’t keep his mouth shut to maintain that blessing.

Ahhh, it’s still a shame. The guy’s a great talent. He should have been smacked in the mouth a long time ago – apparently it never happened. Good friends and brothers let you know when your head gets too big. He’s been around nothing but women for too long. But you know what?

“Bow your neck and confront the game….”

When T.O. was released by the EAGLES I used his story to try to teach my students a valuble lesson about life. One of a football player throwing away money because of his attitude. When he signed with the Cowboys those same students laughed at me saying T.O. got his money. I just hope those students that I talked to learned the lesson that I was trying to get across to them.

I’ve been saying it for years that T.O. is mentally ill. Whether you want to call it bipolar disorder, narcissistic personality disorder, PDD, or a combination, the fact remains that T.O. has mental problems. Period. The man can’t help it. You can blame nature or nurture.

My wife is a headshrinker, has said more than once that TO is going to pay for some therapists kids to go through college if he ever figures out he needs help.

This is what happens, when you go through life as a superior athlete. When you are babied, coddled, pampered & told how great you are your whole life, you have no humility & have zero idea what reality is. He can’t let go, because he knows deep down inside, that his NFL career is over, & has nothing to offer the real world. Especially when his posse, leaches, enablers & gold diggers abandon him, & have no need for him anymore. I feel no pity or sorrow for him, because if he would have handled himself better & not listened to scumbag Rosenhosser, he could have been a King here! BTW, that picture above should be for Woodies magazine. LMFBO!!!

RIGHT OR WRONG: T.O. went tk Buffalo and had a great year on a shit team with no complaint. Went to CIN the next year, and caught around 70 passes, 1000 yards and 9 TDs- effectively taking all of Chad Johnson’s catches- Hiw many has Chad caught this year? 10 for 58 maybe? Anyways. U got coke kingpins, domestic cases, Felons of all types including a firmer dogfighter (who I am a fan of, and have let go) the point is his what made ATTITUDE so much worse an offense that he’s in the IFL? I mean he’s from that era if DIVA WR- They suppose to have a chip on their shoulder. I don’t know. I’M sure T.O. was a pain in his past, but just like I tell the Vick haters now: How long are you supposed to keep paying for mistakes you made a long time ago? I don’t remember any drama in Cincinnati? AND say what u want but look at the guy, and u know his work ethic is serious. I mean he probably lifts more in one morning than DESEAN JACKSoN ALL SEASON.

How can anyone feel sorry for someone that has squandered as many opportunities for greatness and amazing success, including financial, as he’s had ?

Eaglesinoak, it’s good to see someone support him because there were a lot of people blaming McNabb for T.O.’s problems. I couldn’t understand it then and I don’t understand it now, but at least you’re sincere about your opinion.

However, in my opinion, T.O. was a bum and continues to be a bum. Also, I feel he ruined the Eagles’ chance at winning a Superbowl.

MTC, the only thing I feel sorry for him on, is all of the leaches, enablers, gold diggers & baby momma’s (4 kids with 3 women), that used him up, because of his immaturity & mental issues (crying on TV for no reason, 2006 hydrocodone overdose). He definitely won’t be able to adjust to life without Football, unless he surrounds himself with trust worthy people. But that ship might have sailed a long time ago. If Rosenhosser really gave a crap about him, he would get him some help.

I hear ya DCar. But, that man burnt every bridge he every crossed and, from what I’ve heard, had people that tried to help and I struggle having empathy for him. He had choices very few others have ever had or could only dream of.

MTC, you’re right. No argument here. It’s ashame that he isn’t humble, or has any humility, to realise how blessed he is. Because he was given a gift from the big chief upstairs, & has flushed it in the dumper.

The fans who blamed McNabb for their falling out are ignorant. T.O. has done this just about everywhere he has gone. He is the wide receiver version of Jeff George. Great personal numbers, but a bad attitude and failure in big games. People question McNabb’s leadership, but where were J. Trott and B. Dawk? I love B. Dawk, but he laid low. As far as McNabb throwing up in the Super Bowl, get real! Jim Kelly had a history of doing this and he is in the hall of fame. Last time I checked, McNabb performed better than Jaws. Jaws choked worse in the Super Bowl than McNabb. Repeat, Jaws performed horribly!