Overconfidence Will Cost The Giants Versus The Patriots 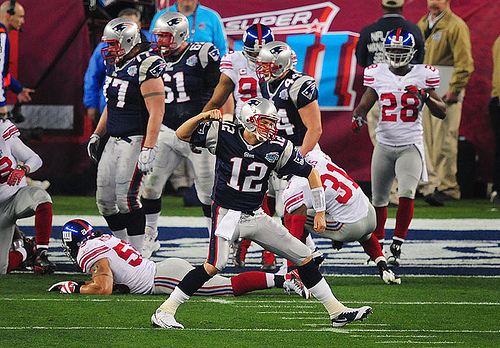 When the Giants qualified for the Super Bowl a couple of weeks ago by beating the Niners on a Sunday night after the Patriots had got the win over the Ravens, I was of the belief that New York was on their way to being Super Bowl Champions.

With the game just hours away now, I’ve changed my mind and now believe it will be the Patriots who will be standing in the end.  In the previous game,

The Giants website prematurely recognized them as Super Bowl Champions.  That’s no big deal because somebody on their staff made a mistake and put up a banner which should not have been put up.

But I have heard the comments of New York players like defensive lineman Chris Canty who said that Giants fans need to get ready for a parade later this week.  Safety Antrel Rolle telling everybody that “we’re going to win this thing”.  Second-year defensive lineman Jason Pierre-Paul has come forward to say the New York pass rush is already in future Hall of Famer Tom Brady’s head.

Despite these comments Canty and running back Brandon Jacobs don’t believe the Giants are overconfident.

“I think Coach has a good feel for our football team and the pulse of our locker room,” Canty said. “I think he knows when to step in and say ‘Enough is enough.’ I don’t think guys have crossed those lines.”

“This team is confident and not overconfident”, Jacobs said. “Cocky is nowhere near the equation. Guys are confident. Our coaches are confident. There’s no reason why we should’ve got on the bus if we’re not going to be confident. And for the guys who are not confident, they should send them back to Jersey.”

I disagree with these guys.  I do think Giants are overconfident.  Being ready and being overconfident are slightly different.  I think it’s better to go into a game with a little concern.

It seems to me that the Giants have no concern.  On the other hand, New England Patriots head coach Bill Belichick and quarterback Tom Brady have been living with that Super Bowl loss to New York for a few years.  You can believe that they’re going into this game concerned and that’s a good thing.

I still believe the Giants have an advantage in personnel matchups.  I believe they are the better team, but their overconfidence has pushed me to pick the Patriots to win it all.

Another Afternoon Game, Another Loss for the Flyers

Ilya Bryzgalov Could Still Be The Difference In The Second Half