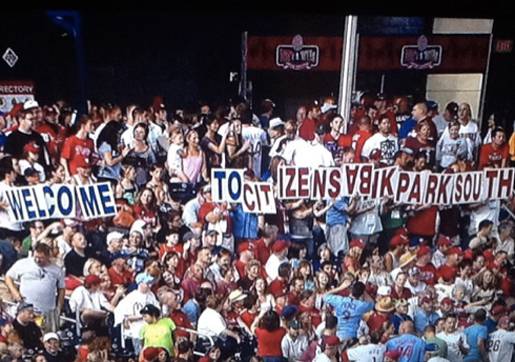 Most of the citizens of the state of Pennsylvania have no idea who U.S. Senator Bob Casey Jr. is.  I don’t know anything that he’s done of significance since he’s been in office.  He’s what you call an empty suit who got elected because of his father, who was formerly a major politician in the state.

Casey is up for re-election in the fall, so he’s trying to win vote.  Check out this letter he sent to the owner to the Washington Nationals concerning their attempt to prevent Phillies fans from dominating their park when the baseball season starts.

I write regarding the recently announced “Take Back the Park” ticket policy at Washington Nationals Park and to respectfully request its elimination. I am concerned that dedicated Philadelphia Phillies fans will be unfairly denied access to games when their team plays against the Nationals.

It has come to my attention that residents of Washington, DC, Virginia and Maryland have been given special priority access to tickets sales on the dates in May when the Nationals and the Phillies compete. According to the team’s website, only credit card billing addresses from these two states and the District of Columbia will be processed for the presale, effectively blocking thousands of Phillies fans who root for their team by visiting Nationals Park. I appreciate the desire to enjoy a home field advantage, but this unprecedented policy solely and unfairly targets Phillies fans.

As the Nation’s capital, Washington DC uniquely plays host to visitors from across the country. In addition to the fans who visit exclusively for Phillies games, tourists from the Commonwealth who hope to include a game on their Washington, DC itinerary could be blocked from attendance. In the spirit of good sportsmanship and healthy competition, I urge you to reconsider the policy and immediately allow Phillies fans equal access to ticket sales at Nationals Park.

Garry, how can you admit you know nothing about the guy and then criticize him? You are basically saying that you are comfortable speaking out of your ass!

Your first sentence is a good example. You make that statement with what knowledge or facts backing it? So everyone who’s got a job their father had sucks? Sure, its true for joe buck, but the mannings suck according to your logic.

Wonder if it’s not too late for Bob Casey Jr to run for the Republican Presidential Nominee….

Gary, you are absolutely correct about Senator Casey. He is considered a “rank and file Democrat” which is not a bad label but when added to the fact that he has sponsored 186 bills since Jan 4, 2007 and only 6 have made it out of committee and zero were enacted successfully speaks to his ineffectiveness. I think referring to him as an “empty suit” and living off his family name is accurate. Being an election year causes many politicians to do interesting things.

Casey is only in office due to his father…. he is as useful in office as a broken condom with the neighborhood pig!

The letter is a joke and he has no real care about the outcome.. .

Pretty transparant there Schiller…I doubt that you would have had a similar response if this were about Toomey.

This whole “Take Back the Park” is a joke….the Nationals actually used to market to the Phillies fans in years past to come down to their ballpark….now, since the marketing campaign worked so well and the Phillies fans have taken over trhe park, that they want to ban us.

Look, I hate going to a Phillies / Mets game when there are groups of Mets fans, but bottom line is if the Phillies fans are willing to sell their tickets for $$ to stinkin Met’s fans, well there isn’t a whole lot we can do.

The best thing the Nationals can do is establish a season ticket fanbase that will make the tickets tougher to get for Phillies fans…their team should be better next year, but historically the area has trouble supporting both the Orioles and Nationals, so it makes it easy for the Phillies fans.

I stand by my comment. Garry said he’s unaware of what Casey has done, yet he disparages the guy.

Anyone who says ‘I don’t know anything about this. Now listen to what I say about this.” is setting themselves up to sound like a fool.

I’m not saying that anyone should vote for Casey because he wrote this letter. I’m saying that it’s bullshit to admit you’re ignorant about a guys politics and then criticize him as a politician. That’s all.

My point however, was that if Garry had made a similar point about Toomey that you, Schiller, would not have had the same response. Not a big deal, I was just stating my impression, and I am sure that you may disagree.

greenfan, I’m fine admiting that I side more with Casey than Toomey. But I’m confident that I would have the same reaction if Garry said the same thing but the situation was about Toomey. While I have my political views and I’m not shy about them, I think you’d agree that I make it a habit of calling out statements that I view as assinine, nonsensical, or bullshit. That’s what this was.

Case in point – I think a lot of Gingrich’s criticisms of some of the Republican candidates is bullshit too. I’d call out someone for calling Hitler lazy and unfocused…..

Schill, why is it when you don’t agree with someone on here, you blast them? You are as transparent as a window. Learn how to read the man’s article before you rip him, you ding-a-ling! BTW, there was nothing wrong with anything G said about him. I’m a Democrat, & I agree with everything he said. This is all a ulterior motive, to get all of the votes from the surrounding sport fans. Are you that ignorant & stupid, Schill, or do you have ulterior motives? Stop being a troll & comment Nazi! Just go away.

Dcar, I didn’t blast anyone on this post except for Joe Buck. I spoke about what people said, not about garry. Its funny because you blast people cause you don’t agree with them all the time…I did read the article first, actually, I referenced specific parts before anyone besides garry said anything on this post. So what are you talking about? You need to learn the difference between people and comments.

schiller
February 10, 2012 – 6:29 am
Garry, how can you admit you know nothing about the guy and then criticize him? You are basically saying that you are comfortable speaking out of your ass!
schiller
February 10, 2012 – 2:49 pm
I stand by my comment. Garry said he’s unaware of what Casey has done, yet he disparages the guy.
Anyone who says ‘I don’t know anything about this. Now listen to what I say about this.” is setting themselves up to sound like a fool.
YOU ARE THE ONE WHO DOESN’T KNOW THE DIFFERENCE, YOU DOPE. You write crap, criticizing & correcting everyone all the time, & say you didn’t say it. You are either insane, forgetful, or just plain stupid! Those are your quotes above, not mine. Those are blasting Gary, aren’t they? IDIOT! What is your problem, always blasting the media, & blaming them for everything & all of the negativity. They are doing their jobs. If we as fans are negative, it is us as fans who choose to be. I’m not mentally challenged, nor mentally weak, to let the media twist my thinking. I have my own mind. Cut your crap out & grow up.

BTW, when I blast someone on here, it is nitwits like you, who are clueless, idiotic, delusional, arrogant, condescending, classless, keyboard gangsters, who always think they are right. When I’m wrong I swallow my pride, apologize, eat crow & admit so. You have yet to once admit to when you are wrong. You just come on here to get your jollies off of psychoanalyzing & correcting everyone. Get a life dude! everyone is entitled to say & talk about what they want. Who the f^#@ nominated you the internet blog correction President? STFU!!!

Dcar, you still don’t get it. I criticized what he wrote plain and simple.

You don’t get it! What’s the difference? You are a lost cause. Don’t have time for guys like you.

Dcar, the difference is that you can respect a person, but disagree with something they say. Is this a new concept for you?

schiller, you are right – at least in general.

I’m pretty sure Garry (and other commenters) would be fine and dandy if Toomey had written that exact same letter based on the irrationality of the post. The irrational element, besides the childish “empty suit” stuff, is that anything someone in elected office does during election season is an unholy effort to get votes. That is often true when the actions are totally inconsistent with the politician’s proclaimed policies and established record, but the only way to NOT be accused of that is to do NOTHING during re-election campaign season.

If nothing else, the whole bit is lame. If that letter influences someone’s vote for Senator, then that is one spectacularly weak reason to vote. Just as weak as Garry’s petty accusation.

timm – great points. I don’t think the letter has any political significance whatsoever.

But I do hate empty and/or ignorant cheap shots at the government, I think it hurts us as a society.

And for the record on my political leaning… I heard Casey was vocally anti on the contraception issue which I find disgusting.

Gary Cobb’s sentiments are not only appropriate, accurate, but consistent with the founding father’s principles and rhetoric that a centralized, national government is not to be trusted with anything but the limited functions for which it was created, and securing seats for Phillies fans at the nationals park is certainly not one of them, nor is securing use of contraceptives

Jake, thanks for your opinion. The fact that you believe in such a thing as accuracy of opinions is greatly disturbing however. Securing seats was never an issue – sucuring the right to access was. And the national government never ever had anything to do with this – it was a state senator writing to a baseball team owner. Perhaps the name of that team caused your confusion?

schiller did you study the us constitution, that last post was pitifully ignorant, stick with psychology 101

jake, my man, don’t waste your breath on that @$$clown. He lives in his own little delusional world, where everything he thinks, says & does, is right. He is the type of guy that was bullied his entire life, has a Napoleon complex, or was never allowed to do, say anything, or think for himself as a child & teen. Now he can show the world who knows it all.