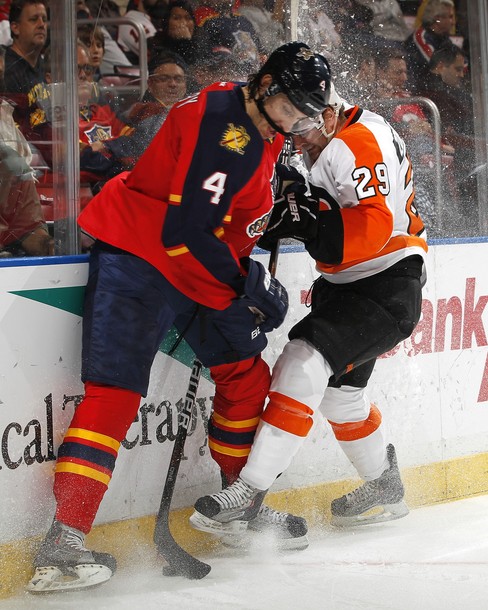 The Flyers announced today that they have recalled not one, but two Adirondack Phantoms for tonight’s game against the Florida Panthers.

With Jaromir Jagr as a game-time decision and Jake Voracek officially “day-to-day” at this point, Harry Zolnierczyk will likely be in the line-up. Jody Shelley will be the 12th forward if necessary.

The other call-up is rookie defenseman Brandon Manning. Manning, 21, was signed by the Flyers as a free agent last year from the WHL. He was sidelined for the Phantoms at the beginning of the year but now has 4 goals and 9 points in 32 games played.

Tim McManus of the Post Star tweeted this about Manning: “For those asking on Manning: impressed as a team-first, feisty player. Great shot from the point. Has come along quickly since injury. Manning was evolving into one of more popular players here in less than half season b/c style of play. Always stood up for teammates.”

Manning may not actually play tonight but could be a seventh defenseman in case of more injuries. The Flyers have recalled Harry Z under emergency conditions, meaning they still have one more recall left before the end of the season.

James van Riemsdyk, recuperating from foot surgery, was placed on LTIR in order to fit both players under the salary cap.

Notes From Phillies’ 10-3 Loss To Houston

Paul Holmgren – Candidate for GM of the Year?

whoever is the coach of the Adirondack Phantoms, I tip my cap to you for developing and having all these rookies prepared for the Flyers’ immediate need — they have all helped

Joe Paterson is the coach of the Phantoms. He hasn’t been all that much of an improvement from former coach Greg Gilbert (fired mid-season last year) in terms of the Phantoms’ record, but the players are much happier under his tenure. At the very least, he’s been very good at teaching them the same system as Laviolette’s.

Flyers kick Panther’s ass tonite, take NO prisoners…Bryshgalov play like a goalie should.