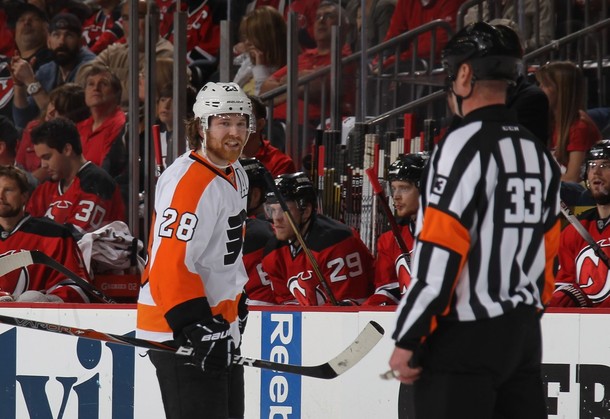 It’s no longer “breaking news” that Claude Giroux of the Philadelphia Flyers has been suspended one game for his hit to the head of Dainius Zubrus in the Game Four loss on Sunday, but I thought I would weigh in on the subject.

The explanation provided by Brendan Shanahan suggests that Giroux recklessly delivered the hit out of frustration at the officiating. “As the puck is shot past Giroux, he displays frustration at the referee, and even goes to the degree of turning his back to the play to continue making his point. He then turns back to re-focus on the puck,  recognizes there’s a turnover, and begins to pursue Zubrus, and delivers a late, reckless hit to the head.”

He doesn’t address the quality of the officiating or whether Giroux had a point, but that’s irrelevant to the argument. He also goes on to point out that despite Zubrus’ head being down, it did not go down suddenly or change direction as Giroux approached. My initial reaction while watching the game was to use this defense.

In reality, though, the suspension is fair and reasonable. Its frustrating for Flyers fans that, of all the suspensions that Brendan Shanahan chooses to deliver and “get right,” it’s one that comes at an inopportune time for the home team, facing elimination on Tuesday night.

It’s the right call, though, and should serve Giroux as a lesson on how to control himself in spite of the circumstances. If he’s ever going to be handed leadership of the team, he’s going to have to learn to respond to poor officiating by ignoring it and focusing on the game instead.

The loss of Giroux for Game Five will diminish the available talent that Peter Laviolette has at his disposal, but if the Flyers have any shot at coming back in this series, they will use their misfortune as a rallying point. It worked for the Pittsburgh Penguins during round one, when they scored in double digits against the Flyers in spite of the odds and without top forward James Neal.

This is the 2012 Philadelphia Flyers’ watershed moment. This is the game that will define their season. To respond to the adversity with a team-wide commitment to leave it all on the ice and come away with a win will leave fans with pride and appreciation for their resilience.

It almost doesn’t matter at this point if they end up losing the series in six or seven games, as long as they don’t lose in a convincingly clumsy fashion like they did over the last three games. If the team rolls over, it unravels all the success they achieved during the season in spite of their youth, in spite of their injuries, and in spite of the roster upheavel that took place 11 months ago.

Peter Laviolette was asked in the post-game press conference after Game Three of the Quarterfinals if his team had an advantage in knowing what it’s like to play a team down 3-0 in a series, alluding to being in that situation in 2010 and 2011 against the Boston Bruins. “My team? My team hasn’t been down 0-3.”

“Some of the players on the team have.”

Well, now they basically are, Peter. Your move.

Hamels Did No Wrong Throwing At Harper

Cole Hamels Made A Mistake, It’s As Simple As That