Sixers To Face Elimination On Wednesday 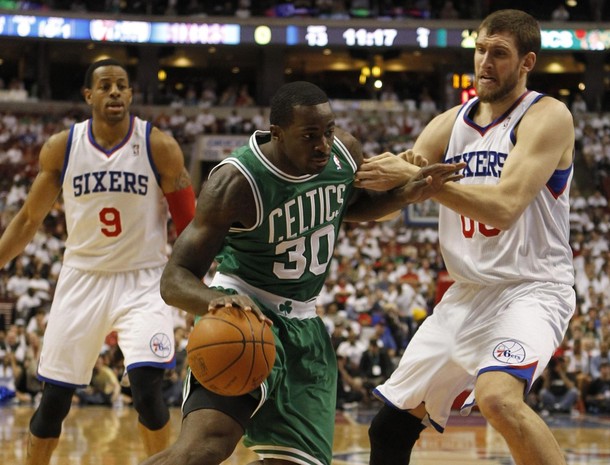 When the 76ers return to Philadelphia on Wednesday night, they could very well be playing their last game of the season. The Sixers started out strong in Monday’s Game 5 against the Boston Celtics, leading 50-47 at halftime, but Doug Collins’ group ran out of gas in the second half, managing to score just 35 points in the final 24 minutes.

During the first half, it looked as though the Sixers had a chance to steal another game on the road. They were playing the Celtics evenly, and were anchored by a strong performance by Elton Brand. The power forward played just over 15 minutes in Game 4, but turned in his best effort of the playoffs last night, scoring 19 points on 13 shots.

However, in the third quarter, the Celtics decided it was time to flip the proverbial switch to “on”.

When the Celtics have been at their best, they’ve been far superior to the Sixers. Boston took their defensive play up a notch in the third quarter, allowing Philadelphia to score just 16 points. And while the Sixers were still able to limit the damage from Rajon Rondo, Kevin Garnett, and Paul Pierce, they were unable to come up with an answer for Brandon Bass.

Bass played one of the best games of his career on Monday. He lit up the Sixers for 27 points on 13 shots, and sunk nine of his 10 free throws. He also collected six rebounds, two steals, and two blocks. The forward took over the game in the third quarter, scoring 18 points (two more than the entire Sixer team managed in the quarter), and went on a run where scored 12 of Boston’s 14 points.

The Sixers had a lot of heroes in their Game 4 victory, but none of those guys were able to repeat their performances last night. Thaddeus Young and Lavoy Allen combined for 10 offensive rebounds on Friday, but only had six total rebounds between the two of them last night. Lou Williams lost his scoring touch as quickly as he found it, connecting on just three of his 10 shots, and only had two assists after dishing out eight the game before.

Andre Iguodala showed yesterday why my opinion of him hasn’t changed despite his success during this playoff run. Even though he’s had an excellent postseason, he just can’t by relied on to perform that way consistently, and he can’t always find a way to take over a game when his team needs a lift. He shot just three of 10 from the floor, and missed two critical free throws he earned on a clear path foul in the third quarter. Those two misses were the turning point in the game, and swung the momentum in Boston’s favor.

Though this loss was disappointing, its no reason to be discouraged about the team or what they’ve accomplished to this point. Everything the Sixers have given the city in the last few weeks hasn’t been expected, and has been an enjoyable surprise. They’re now facing a very tall order to win two in a row against a much better Celtics team, but I think they have a chance to push the series to a Game 7.