Weighing In on Recent Comments, Criticism of Ed Snider 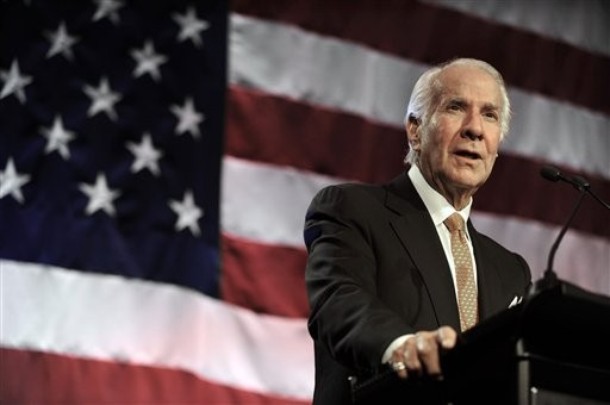 Sam Carchidi of the Philadelphia Inquirer published an interview on Wednesday with Philadelphia Flyers owner Ed Snider regarding the state of the team and his thoughts on the Stanley Cup Semifinals loss to the New Jersey Devils.

Snider’s reaction to the post-season was a reasonable and optimistic take compared with the dramatic conclusions he came to last year.

In a similar report from Carchidi in May of 2011, Snider made the following statements:

Never mind that coach Peter Laviolette dropped Sergei Bobrovsky like a bad habit after one bad start against the Buffalo Sabres and replaced him with Michael Leighton; never again would the Flyers go into the post-season without solid goaltending.

As a result of Snider’s influence, the organization traded a 3rd round draft pick for the rights to Ilya Bryzgalov and subsequently signed him to the $51 million contract now tied around his neck like a Hangman’s knot.

Bryzgalov played decently in the series against the New Jersey Devils, but he finished the 2012 Stanley Cup playoffs with 0.890 save percentage and 3.46 goals-against-average.

Last year’s net-minding trifecta, by comparison, had a combined 0.894 save percentage and 3.20 goals-against-average.

On paper, the team’s goaltending was worse. Snider’s reaction?

“I think [Bryzgalov] wasn’t prepared for Philadelphia fans and the microscope that he’s under. I think we’re tougher on goalies maybe than any other team in the league. I think our fans are frustrated, and rightfully so, for the goaltending carousel that we’ve had through the years… It’s the problem of management, not of Bryzgalov. We blew it, and we created the situation. I watch the playoffs and regular-season games, and all goalies let in bad goals. But when a goalie in Philadelphia lets in a bad goal, it’s like a disaster.”

“Look at the playoffs two years ago when we played New Jersey. Brodeur looked like he was through… But he was good enough to win [in 2012]. In Philly, if that would happen, they would be booing our goalie even if we were ahead.”

These last comments have drawn the ire of a number of fans who interpret Snider’s statements as blaming their criticism for the play of Bryzgalov.

In reality, though, the lesson that should be learned from the last two seasons is that jumping to erratic conclusions, whether you own the team or season tickets, isn’t going to produce a better product on the ice.

Had Snider been less adamant last year about acquiring a goalie by any means necessary, then perhaps the Flyers wouldn’t have handcuffed themselves with only one option for the next eight years.

Fans have every right to be disappointed in Bryzgalov’s performance thus far, but hasty reactions in 2011 are what galvanized Snider to lobby for him in the first place.

The buzz word in Flyerdom now is “defense,” and many would-be general managers have developed their own strategies for how to “fix” the Philadelphia Flyers’ blue line. Most of these scenarios include letting defenseman Matt Carle walk, trading blue chip prospects and first round draft picks or signing long-term contracts to unrestricted free agents.

Snider’s suggestions include re-signing Carle and making “some moves that help offset the loss of [Chris] Pronger.”

The best thing that general manager Paul Holmgren can do as he develops his strategy for the offseason is stand back, take a deep breath, and ignore Mr. Snider.  It’s not that, as the only owner of the franchise throughout its 45-year existence, he doesn’t deserve to be a part of the process.

The problem is that he’s a fan too.

Ed Snider wants the team to “win now” probably more than anyone in Philadelphia, but when he gives Holmgren directions, it’s most likely based on emotional decisions. He’s not the type of guy that’s going to review the list of available free agents and evaluate them based on age, health, offensive zone starts, CORSI rating, etc. He’s the type to say, “I want Shea Weber by any means necessary.”

Holmgren has earned enough rope at this point to be allowed to build the team as he sees fit, regardless of what his boss says. It’s reassuring to know that Snider may just let him do that this time around.