AFL Star Tiger Jones Excited For Opportunity With The Eagles 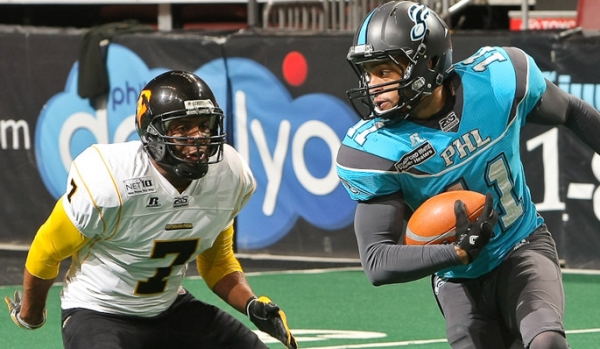 Philadelphia Soul wide receiver Anthony “Tiger” Jones has become the latest AFL player to have his dream come true. Jones will join the Philadelphia Eagles at training camp at the end of the month to try and secure a spot on the 53-man roster.

The former Louisville Cardinal is an AFL star; last season he was the AFL Receiver of the Year and this year he is leading the league in receiving yards with over 2,000. Although Jones is excited about an opportunity with the Eagles, he has mixed emotions about leaving the Philadelphia Soul. With a league-best 14-3 record, the Soul were primed to make a championship run.

“When you put in this much work, spend three to four months with these guys and set goals for the team, it’s hard not to see it through to the finish line,” Jones said. “It’s definitely bittersweet, but you can’t pass up an opportunity like this. They don’t come around like this every day, especially in the Arena league. A lot of NFL guys look at us like we can’t make the transition. For them to give me a shot says something.”

With the top three receiver spots already secured by DeSean Jackson, Jeremy Maclin, and Jason Avant, the 30 year-old wideout will have to compete with Riley Cooper, Chad Hall, Marvin McNutt, and Damaris Johnson for a roster spot. Since the Eagles normally keep six receivers on the roster, Jones will have to outwork two of the four players in order to make the team.

Although some would say the odds are against him, I’m cheering for Tiger Jones to turn heads at training camp and make the team. I mean Kurt Warner went from a quarterback for the Iowa Barnstormers to a Super Bowl MVP. Who doesn’t enjoy cheering for the underdog?

Neither he, nor Chad Hall is going to make this team.

way to go out on a limb haha

What # is Tiger going to wear.. I am ordering a Jersey for Songs right now..
Songs is going to love this dude.. ha

How in the hell is this news?

Randy Moss is ripping it up in San fran against a top defense right now and we have articles for camp bodies?

Give us some juicy content here for God’s sake…Coffee stained Banner walks in on Reid banging Lurie, then snitched ….. Jeff’s wife to walk.

Give us the dirt “G”

Songs – “Randy Moss is ripping it up in San Fran against a top defense right now” —— well I’m not surprised to hear utter bullshit from you – but listen to what you said. 0 tackling allowed – wait, is there even practices for them right now or are you just reacting to a comment that was made about OTAs that already happened? Passing camps. No tackling. No legit passrush.

And Songs, every player transaction is news. Period. For you to not know that is just one more reason to think you’re…well I covered your stupidity and ignorance above…

gotta – well, to be fair, there was a report out there that Jim Harbaugh spoke glowingly about Moss from the OTAs. People with a brain of course would read nothing into that. Songs however, read it as “the 49ers are currently having full team practices with helmets, pads, tackling, AND an indepentdent objective source said Moss looked great…

But yeah, Songs is clueless

Unfortunately for Songs, most of the guys he wants are retired, but you never know!!

As for the 49ers. Look for a real drop back to the pack for them

Return to the mean for Smith, Harbaugh’s 1st year schtick fades, and of course to top it off, they made the stupid mistake of bringing in a notorious malcontent, because they think they’re “close”. I suggest taking the 49ers under 10 wins.