Placing Expectations for Meszaros in an Expanded Role 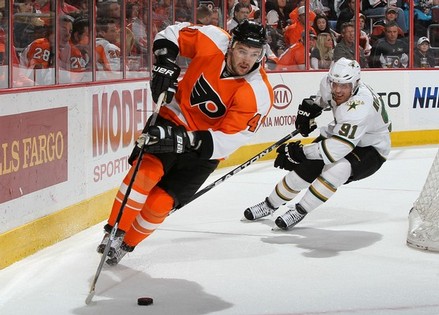 On a conference call with reporters on Wednesday, Philadelphia Flyers general manager Paul Holmgren was asked the status of 26 year-old defenseman Andrej Meszaros. Meszaros suffered a back injury this past March that limited him to 62 games, marking the second time in his seven year NHL career that he didn’t play at least 80 games.

“About the back injury? Yeah, he’s fine,” remarked Holmgren.

Assuming you take him at his word, Meszaros is going to have to taken on an expanded role for the Flyers, sliding into the second defensive pairing to fill the void left after Matt Carle signed with the Tampa Bay Lightning and Shea Weber’s offer sheet was matched by the Nashville Predators.

Behind Kimmo Timonen, he’s the only defenseman on the roster left with significant NHL experience and above-average puck moving capabilities.

After spending the last two seasons largely on the third pairing, though, what should the expectations be?

A former first round draft pick of the Ottawa Senators, Meszaros’ best production came in his rookie season, when he tallied 10 goals and 39 points. In his second season with the Sens, he moved up to a second line pairing with defenseman Wade Redden after the team lost Zdeno Chara to free agency.

The two struggled a bit during the season (Meszaros was a -15, Redden a +1), but went on to lead the Senators to a Stanley Cup Finals series with the Anaheim Ducks.

Meszaros earned a positive Corsi rating in his final year with the Senators (meaning more shots were directed towards the opponent’s net when he was on the ice), along with ample powerplay time and 35 points.

The wheels began to fall off the cart during the 2008 Stanley Cup Quarterfinals, when Meszaros was paired with defenseman Brian Lee. The Senators were swept by the Pittsburgh Penguins and Meszaros was traded to the Tampa Bay Lightning in the offseason.

In his first year with the Lightning, Meszaros was utilized as a top pairing defenseman with Marek Malik, for whom the 2008-09 season would be his last in the NHL.  The two struggled, as did the rest of the Lightning defense, which finished 30th in the NHL.

In his second year, Meszaros slid back into a second/third pairing defenseman position, but never had a consistent partner. He spent the season alongside players such as Matt Walker, Mattias Ohlund, Matt Smaby and Kurtis Foster.

Meszaros’ career hasn’t returned to the zenith reached in Ottawa since his trade to Philadelphia, but he won the Barry Ashbee trophy in 2011 as the team’s best defenseman after an above average season playing with Sean O’Donnell.

Based on his record, it’s not unreasonable to expect Meszaros to be able to eat up Carle’s minutes if used on the second pairing for the 2012-13 NHL season. He has shown the ability to adequately handle second line competition, skate more than 20 minutes a night, and move plays forward.

The doomsday scenario for the Flyers is what happens if Timonen gets hurt?  Meszaros isn’t realistically capable of being a top pairing defenseman, and utilizing Braydon Coburn and Nicklas Grossmann in that capacity is going to hurt the team’s transition game unless Coburn can miraculously revert to his 2007-08 form.

The organization may be gambling with their overall defensive core, but expecting Meszaros to have a strong season is a safe bet.

Notes On The Eagles Defense

How Will Kevin Thomas Impact The Competition At Cornerback?